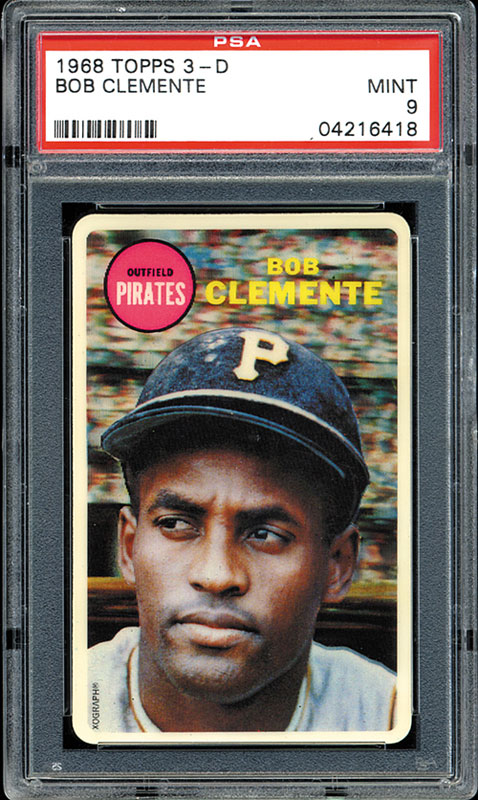 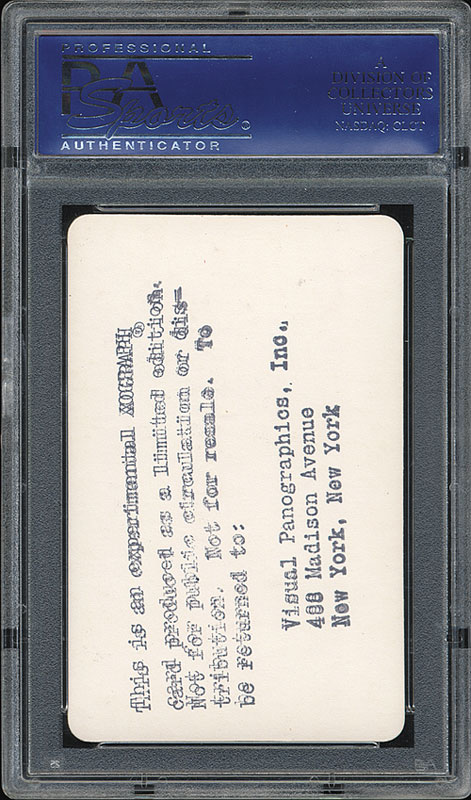 Graded MINT 9 by PSA. One of the finest examples in the world of one of card collecting's most highly regarded classics. One of only six 1968 Topps 3-D Roberto Clemente examples ever graded PSA MINT 9. This card is also extremely special because it has the rare Visual Panographics, Inc., ink stamp on the reverse. It is one of only a handful of 1968 Topps 3-D examples of any player we have ever seen stamped in this significant manner, and one of only two Clemente examples we have ever seen or heard of with the rare ink stamp on the reverse (the other example was graded PR-FR 1 by PSA). This card was consigned by the very same collector who consigned the PSA MINT 10 1968 Topps 3-D Clemente example also offered in this auction. (This was his favorite card and he wanted to have it with and without the stamp on the back if possible. When the opportunity arose, he added the PSA MINT 9 ink-stamped variety to compliment his GEM MINT PSA 10 example.)
The ink stamp on the reverse reads: "This is an experimental XOGRAPH card produced as a limited edition. Not for public circulation or distribution. Not for resale. To be returned to: Visual Panographics, Inc., 488 Madison Avenue, New York, New York." (Research Note: "Xograph" was a trademark of Visual Panographics, Inc., the company that worked with Topps to produce the 1968 Topps 3-D set.) Because the ink stamps were hand-stamped by Visual Panographics, Inc., there are often natural minor imperfections to the stamp strike. The slight double-registry of the ink stamp on the reverse is the only factor keeping this PSA 9 MINT example from grading GEM MINT 10.
Extraordinary MINT example of what is not only Roberto Clemente's most sought-after card, but the key to the 1968 Topps 3-D set, and the single most valuable card from the entire decade of the 1960s. One of the few cards deserving to be classified as a modern classic, the 1968 Topps 3-D Roberto Clemente stands on its own very comfortably with the most significant and noteworthy cards from all eras. The fact that this example is in Mint condition is extraordinary as these cards are prone to cracking and scratching. This is one of the "find" cards. In 1999 approximately 100 1968 Topps 3-D cards, including several Clementes, were discovered to be still in the hands of someone who long ago was associated with the production of the set. The cards were sold to a dealer, and soon after dispersed into the hobby. This was certainly the most significant find of 1968 Topps 3-D cards in the history of collecting. This PSA Mint 9 example of Clemente was one of the highlight cards of the find. This card is never going out of style; it has been a classic since 1968. History has proven that when there is a small find of cards in super-high grade which are rare and truly classic (such as the few Mint and Gem Mint #311 Mickey Mantles from the Mint 1952 Topps high-number find of the mid-1980s, each of which in the years following the find sold for tens of thousands of dollars when available but today would sell for hundreds of thousands, and probably over a million dollars each for the several PSA 10 1952 Topps #311 Mantles, to cite a similar example), collectors tend to be rewarded for seizing the opportunity. This is a remarkable Mint example of one of postwar-card collecting's most noteworthy and high-profile cards. Reserve $5,000. Estimate (open). SOLD FOR $29,625