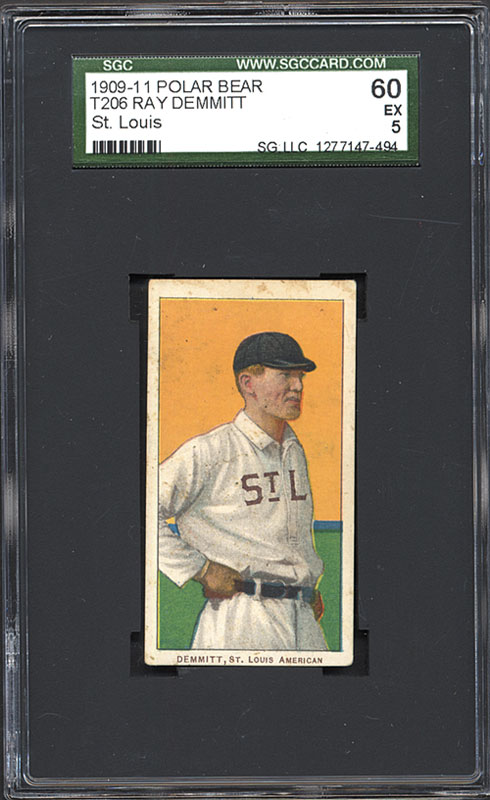 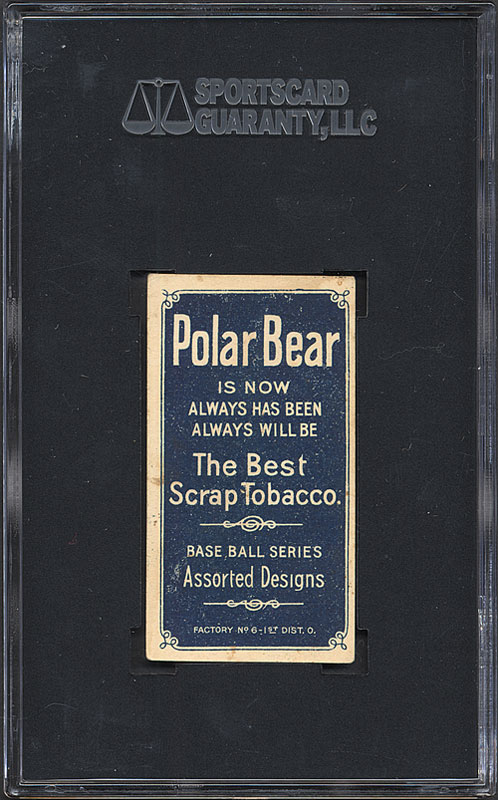 Graded EX 60 by SGC. Presented is an extremely rare high-grade example of Ray Demmitt, St. Louis Americans T206 variation. Demmitt, St. Louis, of course, is one of the key T206 rarities in any condition, but is hardly ever found in such extraordinary high grade. The scarce Demmitt and O'Hara are true condition rarities. Most collectors don't even think about trying to find either of these two cards in high grade because it is virtually impossible. Polar Bear was the only company to issue either of these team variation cards. T206 cards issued with Polar Bear tobacco were not well protected from the accompanying product. This is why T206 cards with Polar Bear advertising reverses almost always have various condition problems, including tobacco staining. This Demmitt example has only very light staining (much less than most T206 Polar Bear cards), and absolutely no creases. It is bright and crisp, with extremely fresh colors, light even wear to the corners, and is centered to the bottom. The back has bold white printing set against a dark blue background. The PSA pop report shows a total of 123 Demmitt, St. Louis, cards graded to date, and of these, only eight are graded EX 5 or better (three EX 5, two EX-MT 6, two NM 7, one NM-MT 8). The SGC pop report shows a total of an additional eighty-five Demmitt, St. Louis, cards graded to date, and of these, eighty-two received various lower grades, with only two Demmitt, St. Louis, graded EX 60 (including this example), and only one example graded higher at SGC EX+ 70. These population report numbers speak for themselves. The equivalent SMR value is $6,500, which, in our opinion, seems very conservative for such an extreme condition rarity from the premier tobacco-card set of the era. This is a very attractive high-grade example of one of the rarest cards in the classic T206 White Border set. From the Joe Pelaez Collection. Reserve $2,500. Estimate $5,000++. SOLD FOR $5,925