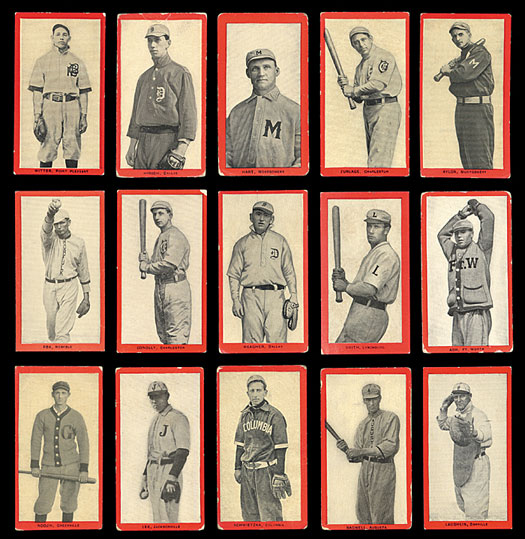 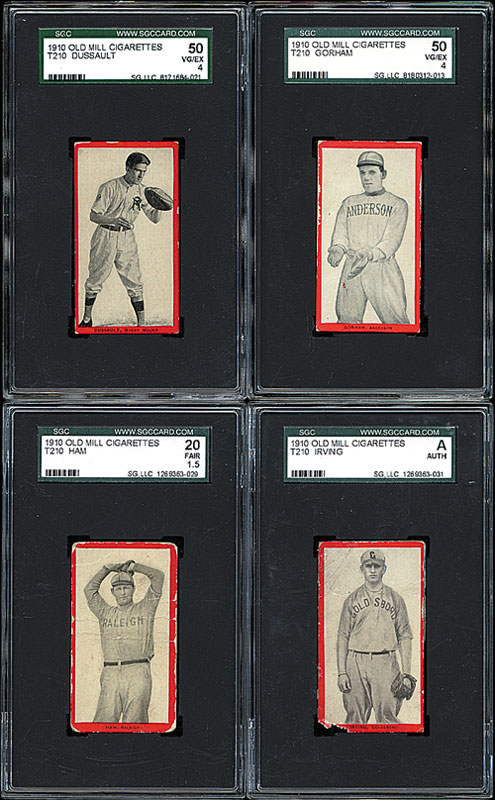 T210 Old Mill Tobacco cards, along with E107s, N172 Old Judges, Colgans Chips and a few other early sets, are among a small selection of elite sets that have long captured the imagination of many of the most legendary collectors, from the earliest days of serious collecting and perhaps more so in years past than even in recent times. The reason many great early collectors prized these cards so highly is twofold: 1) These sets could not (and cannot) simply be purchased in set form. They are rare. They have to be collected. They are a challenge. Collecting a complete set of T210s is a collecting challenge in a way that few other sets can possibly compare. 2) Ultimately, cards are about the players that are featured. Many of the players in T210 (as well as other sets listed above) are featured in few or no other sets. These characteristics make the red-bordered T210 Old Mill set especially significant to the game of baseball and to the world of baseball cards, and especially appealing to the most sophisticated collectors. T210 Old Mill cards also have a very distinctive design with unique and very striking player poses. It is not hard to see a trend back to the sophistication of the olden days of card collecting, as the most knowledgeable collectors of the modern era are appreciating sets such as T210 with newfound enthusiasm, and gravitating to them with the same great respect for these issues as the Bill Habers and Jefferson Burdicks and Larry Fritschs of the world from an earlier collecting era. Presented is an extraordinary collection of 412 different cards (of the 640 in the massive set) from the 1910 T210 Old Mill tobacco series. The T210 set is comprised of eight different series, each representing a different minor league. The various series are identified by a number along the top border on the back of the card. With 640 players, it is the largest tobacco set of the twentieth century and is immediately identifiable by its distinctive red borders. This elusive issue is best known for its key cards: the rare Joe Jackson (series 8) card, as well as Casey Stengel (series 6) as a player. Cards from Series 6, Series 7, and Series 8 are the rarest of all T210s. It is not an accident that Joe Jackson (from Series 8) is so incredibly rare, with fewer than twenty examples known. We suspect that each of the forty Series 8 cards in this collection are approximately as rare as Joe Jackson. Organized by Series, the collection includes: Series 1 - S. Atlantic League (71 of 75 cards, missing Benton, Bierman, Huber, and Lee/Macon); Series 2 - Virginia League (86 of 87 cards, missing Revelle); Series 3 - Texas League (61 of 95 cards); Series 4 - Va. Valley League (34 of 49 cards); Series 5 - Carolina Assn. (55 of 87 cards); Series 6 - Blue Grass League (31 of 66 cards); Series 7 - E. Carolina League (34 of 67 cards); Series 8 - Southern Assn. (40 of 114 cards). The collection grades as follows: 8% Vg-Ex (with a few Ex), 24% Vg, and 68% Pr to Gd-Vg (averaging Fr overall). This is an exciting group for T210 collectors. This is one of the largest collections ever assembled let alone offered at auction of these rare tobacco cards, and an outstanding foundation for carrying on the challenging quest of legendary collector Joe Pelaez for completion of the T210 Old Mill set. A complete list of the collection is available upon request, and can easily be provided by email or fax. From the Joe Pelaez Collection. Total: 412 cards. Reserve $5,000. Estimate $10,000+. SOLD FOR $17,775