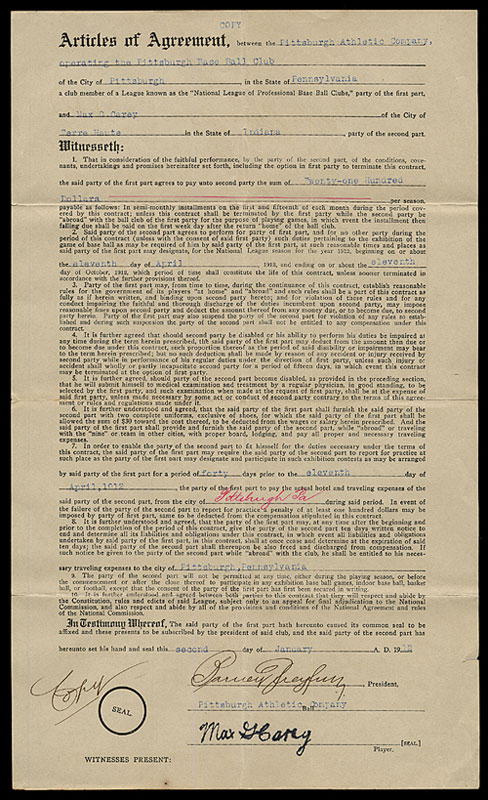 One-page contract, dated January 2, 1912, between Max Carey and the Pittsburgh Athletic Company, signed in black fountain pen by "Max G. Carey" (grading "8," minor bleeding) and "Barney Dreyfuss" ("10") as president. This is a remarkable contract. It is extremely rare to find a Major League player's contract for a Hall of Famer dating so early. The one-year agreement, for the 1912 season, calls for Carey to receive a salary of $2,100. This is one of the earliest contracts we have ever seen for a Hall of Fame player. Equally significant is the fact that this contract has been signed by Barney Dreyfuss, owner of the Pirates. Dreyfuss, who died in 1932, was only recently elected to the Baseball Hall of Fame, in 2008, and his signature today is one of the rarest of all Hall of Fame members. That Dreyfuss' signature appears here on a legal document makes it all the more desirable for advanced collectors. 1912 marked Carey's second full season in the majors, not to mention one of his finest. The speedy center fielder batted .302 with 5 home runs, 66 RBI (second-best total of his career), and 45 stolen bases. Although Carey was a solid hitter, his Hall of Fame credentials were based largely on his defense. Carey was one of the game's greatest outfielders and he trails only Tris Speaker and Willie Mays in career putouts, with 6,363. Utilizing his great speed, he also wrecked havoc on the bases. Carey led the National League in stolen bases ten times, and his career total of 738 was the league's top mark until Lou Brock broke it in 1974. He was elected to the Hall of Fame in 1961. 104 of Hall of Fame players are rare and the offered example is no exception. This is the first Carey contract we have ever offered and we can only recall having seen two others (both from much later in his career) at public auction. This is a extraordinary contract on many counts, including that it is also signed by Hall of Famer Barney Dreyfuss. The contract (8.5 x 14 inches) displays one vertical and three normal horizontal folds, as well as a small tear along the left border. In Excellent condition overall. LOA from James Spence/JSA. Reserve $1,000. Estimate (open). SOLD FOR $14,220