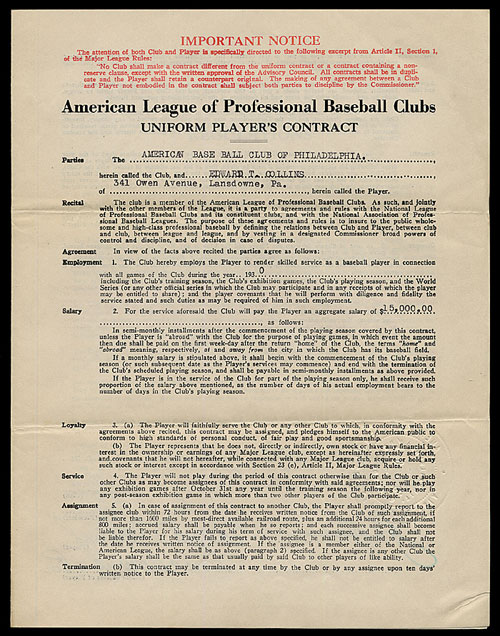 This historic contract represents the end of one of baseball's greatest careers. Four-page fold-over contract, dated January 25, 1930, between Eddie Collins and the American Base Ball Club of Philadelphia, signed in blue fountain pen by "Edward T. Collins" (slight brushing; otherwise "10"), "John D. Shibe" ("7") as president, and a witness. Also signed on the front in black ink by E. S. Barnard ("10") as American League President. The one-year contract, for the 1930 season, calls for Collins to receive a salary of $15,000. This was the final player's contract of Collin's twenty-five-year career, which included almost equal tenures with both the Philadelphia Athletics and Chicago White Sox. Collins only appeared in three games in 1930, in one of which he made the last of his 3,315 hits. A member of Connie Mack's fabled "$100,000 infield" during the early teens, and then later the Chicago White Sox in 1917 and 1919, Collins was regarded as the finest all-around second baseman of his era. The numbers certainly back up that assessment. Collins led his position in fielding percentage nine times and also batted over .300 on twenty separate occasions. He finished his career with a .333 lifetime average, tied for twenty-sixth on the all-time list. Upon his retirement following the 1930 season, he ranked second in major league history in career games (2,826), walks (1,499) and stolen bases (744), third in runs scored (1,821), fourth in hits (3,315) and at bats (9,949), sixth in on-base percentage (.424), and eighth in total bases (4,268). He was also fourth in AL history in triples (187). He was elected to the Hall of Fame in 1939. 104 of Hall of Fame players are rare and the offered example is no exception. This is the first Collins player contract we have ever offered. The contract (8.5 x 11 inches) displays two horizontal folds and a small crease in the lower right. In Excellent condition overall. LOA from James Spence/JSA. Reserve $500. Estimate (open).
SOLD FOR $14,220