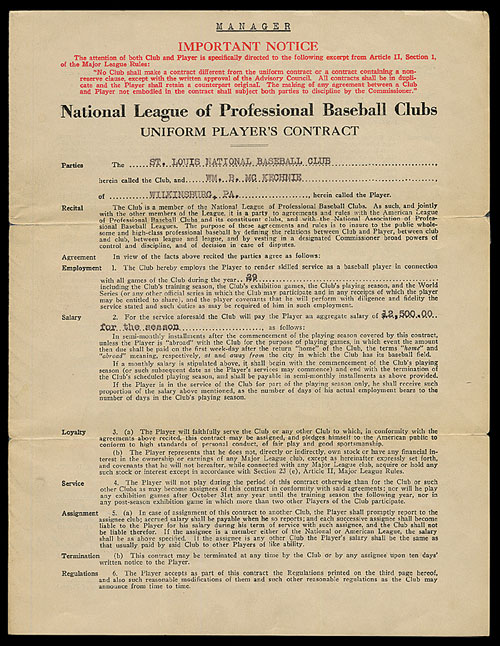 Four-page fold-over contract, dated July 24, 1929, between William McKechnie and the St. Louis National Baseball Club, magnificently signed in blue fountain pen by "W. B. McKechnie (grading "10") and "S. Breadon" (10") as president. Also signed on the front in black ink by John Heydler ("7/8") as National League President. The one-year manager's contract, for the 1929 season, calls for McKechnie to receive a salary of $12,500. Many collectors might be wondering why this contract is dated July 24th, 1929, and not prior to the season as is the norm. There is a reason. After guiding the Cardinals to the 1928 National League pennant, McKechnie's club was swept by the powerful New York Yankees in the World Series. Incensed at the loss to the Yankees, the Cardinals front office overreacted and demoted McKechnie to manager of its Rochester farm club. It was a terrible blow for McKechnie. Despondent over the move, he decided to run for public office, seeking the position of tax collector in Wilkinsburg, Pennsylvania. He vowed to his friends that if he were to be elected he would give up baseball. Fortunately for him, he lost the election and dutifully reported to Rochester in an effort to work his way back to the Majors. Midway through the season, cooler heads prevailed in St. Louis and the Cardinals reinstated him as their manager for the final sixty-two games of the season. McKechnie went on to enjoy an outstanding managerial career that was later highlighted by two additional pennants and a World Championship with Cincinnati. He was elected to the Hall of Fame in 1962. 104 of Hall of Fame players are rare and the offered example is no exception. This is the first McKechnie contract we have ever offered and we cannot recall having seen any others at public auction. The contract (8.5 x 11 inches) displays two horizontal folds, along the lengths of which are tears that have been repaired with clear tape on the interior. In Very Good to Excellent condition overall. LOA from James Spence/JSA. Reserve $200. Estimate $500+. SOLD FOR $3,851