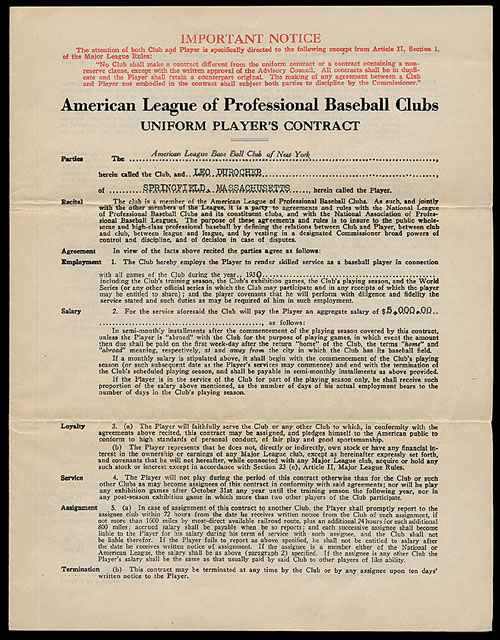 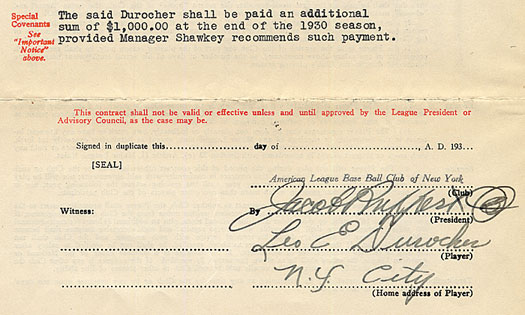 Four-page fold-over contract between Leo Durocher and the American League Base Ball Club of New York, signed in black fountain pen by "Leo E. Durocher" (grading "9/10") and "Jacob Ruppert" as president ("9/10"; Ruppert's signature here is secretarial and has been done by general manager Ed Barrow, which was a common practice at the time). The one-year contract, for the 1930 season, calls for Durocher to receive a salary of $5,000. A special covenant reads "The said Durocher shall be paid an additional sum of $1,000.00 at the end of the 1930 season, provided Manager Shawkey recommends such payment." The handwritten notation, "Durocher 1930 HOLD," appears along the top border on the front cover. Durocher, who was a slick-fielding shortstop, but light hitter (Ruth called him "the All-American out") wasn't long for New York at the time this contract was signed. A gambler both on and off the field, Durocher loved the night life and in his two short years with the club he had been living well above his means. According to reports, he found himself so deep in debt in the spring of 1930 that he asked the Yankees for a $1,000 raise, in advance, to help satisfy his creditors. The Yankees refused his request, but as seen here, maybe the special covenant was added to placate him briefly while the Yankees made preparations for his departure. Another factor working against Durocher was that he and Ruth did not get along. (Ruth accused Durocher of stealing money from his locker.) On February 5, 1930, the Yankees, tired of his brash behavior, sold Durocher's contract to the Cincinnati Reds for an undisclosed sum plus a player to be named, thereby ending his brief two-year stint with the Bronx bombers. Four years later he found his true home among the members of the St. Louis Cardinals' fabled "Gas-House Gang," where he helped lead the club to a World Championship. Following his playing career he embarked on a successful and highly controversial managerial career that eventually resulted in his induction into the Hall of Fame in 1994. 104 of Hall of Fame players are rare and the offered example is no exception. This is first Durocher contract we have ever offered and we cannot recall having seen any others at public auction. The contract (8.5 x 11 inches) displays two horizontal folds and very light toning. In Excellent condition overall. LOA from James Spence/JSA. Reserve $500. Estimate (open). SOLD FOR $11,258