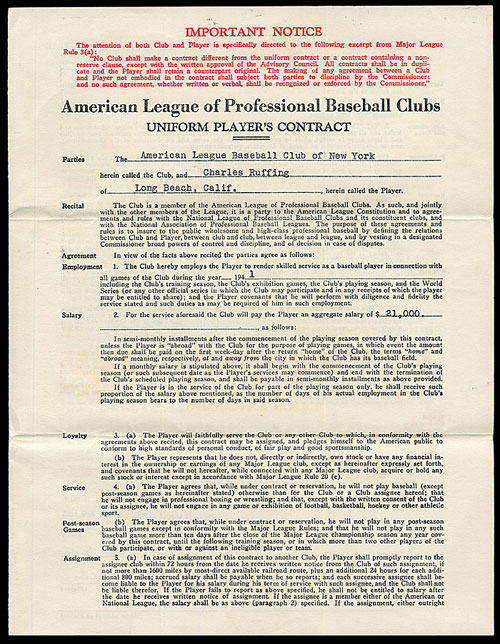 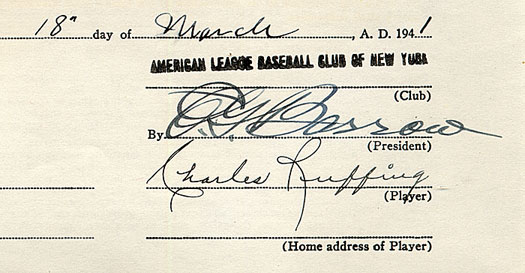 Four-page fold-over contract, dated March 18, 1941, between Charles "Red" Ruffing and the American League Baseball Club of New York, signed in black fountain pen by both "Charles Ruffing" (grading "10") and "E. G. Barrow ("10"), president of the club. The one-year agreement calls for Ruffing to receive a salary of $21,000. Ruffing won a team-high fifteen games while posting a 3.53 ERA in 1941. He continued his winning ways in the postseason by defeating Brooklyn 3-2 in Game 1 of the World Series. Ruffing never had a chance to make another start in the fall classic, however, as the Yankees made short work of their crosstown rivals by defeating the Dodgers in five games. For Ruffing, it marked his sixth World Championship in twelve seasons with the Yankees. Ruffing eventually retired in 1947 with 273 wins. He was elected to the Hall of Fame in 1967. 104 of Hall of Fame players, especially those dating from their respective playing careers, are rare and the offered example is no exception. This is the first Ruffing contract we have ever offered and we have only seen one other example at auction. The contract (8.5 x 11 inches) displays two horizontal folds and is in Near Mint condition overall. Accompanied by its original envelope with the Yankees team name and address printed in the upper right and Ruffing's name typed in the center. The envelope was never mailed and is torn along the right edge; otherwise Ex. Accompanied by a COA ("P98338") from PSA/DNA (hologram sticker affixed to the base of interior signature page). Additional LOA from James Spence/JSA. Reserve $400. Estimate $1,000+. SOLD FOR $6,518