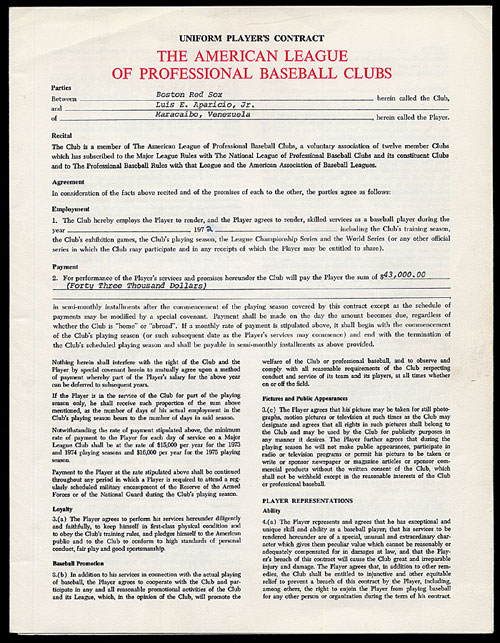 Five-page fold-over contract, dated September 28, 1972, between Luis Aparicio and the Boston Red Sox, flawlessly signed in black ink by "Luis Aparicio" (grading "10") and "Richard H. O'Connell" ("10") as general manager. The contract has also been signed in blue ink ("8/9") by Lee MacPhail in his capacity as American League President (dated January 3, 1973). The one-year agreement, for the 1972 season, calls for Aparicio to receive a salary of $43,000. Frankly, we don't know what to make of this contract. Aparicio played all season for the Red Sox, but the agreement is signed in September. Also, all of the original year dates have been whited out and then gone over in ink to read "1972." The same is true of the 1973 year date for the MacPhail signature. Even stranger is the fact that MacPhail did not become president of the American League until 1974. He was general manager of the New York Yankees in 1973. Furthermore, The Sporting News (on 4/8/72) reported that Aparicio received a salary of $100,000 from the Red Sox in 1972. There is a special covenant that states that the Red Sox, in addition to the $43,000 salary agreed to here, will also pay all of Aparicio's "United States federal, state or city individual income tax thereon." Aparicio lived in Maracaibo, Venezuela, at the time and perhaps this contract relates to a deferred payment, which was signed by all parties at a later date and then backdated for tax purposes. Whatever the circumstances were, it is certainly the most intriguing Hall of Famer contract we have ever seen and perhaps further research will eventually yield information to adequately explain the anomalies. 1972 was Aparicio's penultimate season in baseball. He finished the year with a .257 average, 3 home runs, and 39 RBI. Known primarily for his defensive skills, Aparicio was elected to the Hall of Fame in 1984. 104 of Hall of Fame players are rare and the offered example is no exception. This is the first Aparicio contract we have ever offered and we cannot recall having seen any others at public auction. The contract (8.5 x 11 inches) remains in Excellent to Mint condition. LOA from James Spence/JSA. Reserve $200. Estimate $500+. SOLD FOR $3,851