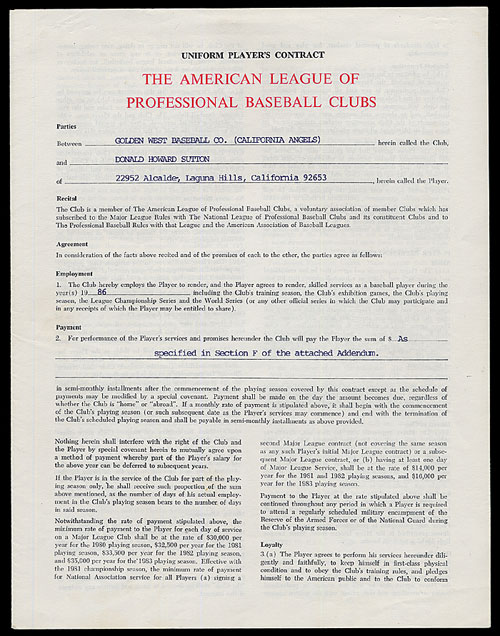 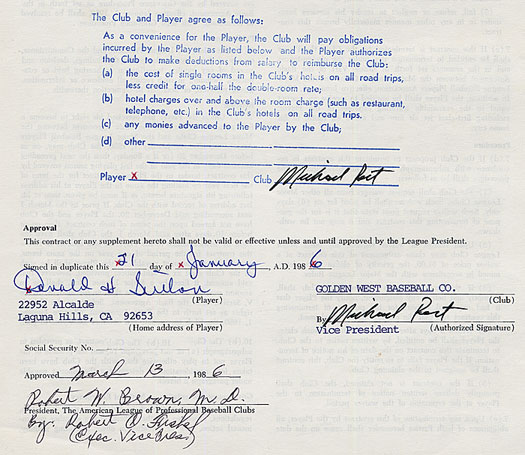 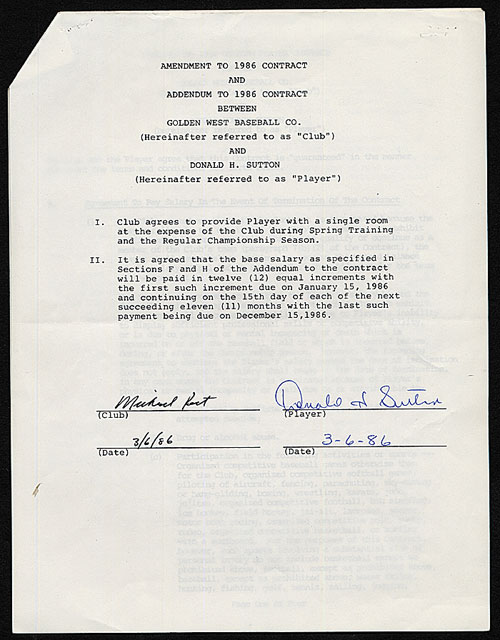 Six-page fold-over contract, dated January 6, 1986, between Don Sutton and the Golden West Baseball Co. (California Angels), signed in blue ink by "Donald H. Sutton" (grading "10") and in black ink "Michael Port" ("10") as general manager. Also signed in black ink by Bobby Brown ("10") as American League President and Robert O. Fishel as executive vice president of the American League. The one-year contract, for the 1986 season, calls for Sutton to receive a base salary of $550,000. Included with the contract is a four-page addendum that actually lists the salary, as well as a number of bonus payments based upon performance criteria. Specifically, Sutton is to receive an additional $40,000 if he starts twenty games, and an additional $100,000 if he starts twenty-five games, thirty games, and thirty-three games, respectively. The addendum also stipulates that the club has the option of renewing this agreement for the 1987 season. The addendum is dated January 6, 1986 and has been signed by both Sutton and Port (each grading "10"). Attached to the addendum is a one-page amendment to the both the contract and addendum, dated March 6, 1986, that has been signed by Sutton and Port (each "10"). Sutton posted a record of 15-11 in 1986, but most importantly, he stated 34 games for the club, thereby receiving an a $450,000 bonus payment as stipulated in this agreement. Sutton retired in 1988 with 324 wins and a 3.26 ERA. He was elected to the Hall of Fame in 1998. 104 of Hall of Fame players are rare and the offered example is no exception. This is the first Sutton contract we have ever offered and we cannot recall having seen any others at public auction. The contract and addendum (8.5 x 11 inches) are each in Excellent condition overall. LOA from James Spence/JSA. Reserve $200. Estimate $500+. SOLD FOR $1,896