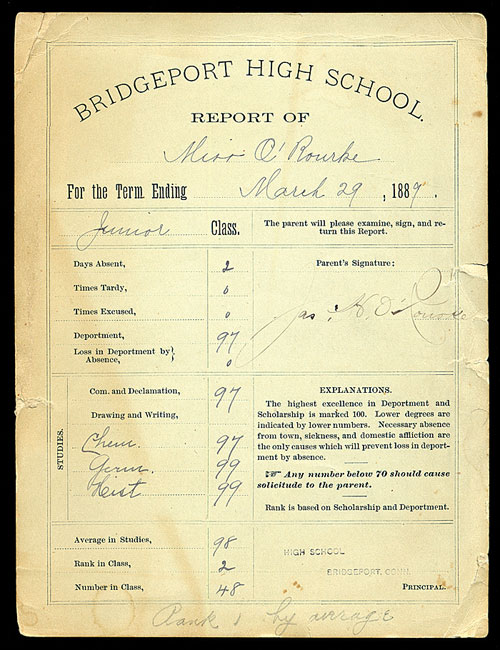 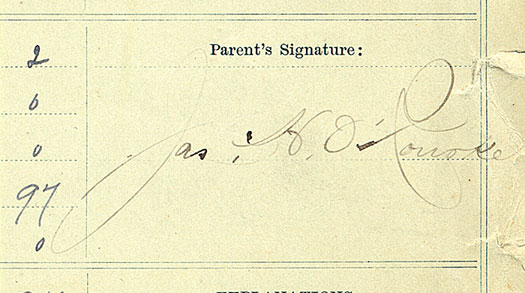 The signature of nineteenth-century Hall of Famer Jim Oâ€™Rourke is exceedingly rare and is often absent in even the most advanced autograph collections. Offered here is not only an outstanding example of that great rarity, but one that is accompanied by the ironclad provenance of originating directly from the O'Rourke family! O'Rourke's signature, penned "Jas. H. O'Rourke," appears on a Bridgeport High School report card, dated March 29, 1889, issued to his daughter Sarah, a member of the junior class. The signature, executed in black fountain pen within the appropriate box, grades "7," with the top portion of the "J" a little light. O'Rourke was probably extremely proud in signing this, as it is noted on the report card that Sarah was currently second in her class with a cumulative average of "98." It is also interesting to note that Sarah scored "97" in declamation, which was a course in oratory. The apple does not fall far from the tree and that is a grade truly befitting the daughter of "Orator Jim." Some advanced collectors might already be familiar with this piece because it was first made public on the Net54 chat board in January 2012, by our consignor: the great-great grandson of James O' Rourke. In his accompanying letter of provenance, he details the report card's history:

Sarah Oâ€™Rourkeâ€™s report card has been in the Oâ€™Rourke family for the past 123 years. It was in Jim Oâ€™Rourkeâ€™s house on Pembroke St. until he died in 1919. It was then in his daughter Sarahâ€™s possession until her death in 1941. When Sarahâ€™s son William cleaned out her house, he found her 1889 report card in a box with textbooks from the 1880s. He brought the box to his home in New Jersey, where it remained until 1996 when the house was sold. Since then it has been in the possession of Williamâ€™s daughter in upstate New York, and was rediscovered by Williamâ€™s grandson over the Thanksgiving holiday in 2011. This report card was saved by James and Annie Oâ€™Rourke for the simple reason that they were proud of their daughterâ€™s grades, as any parent would be. It is a personal piece of family history that has somehow survived the passing of five generations. As a document containing a Baseball Hall of Famerâ€™s signature, itâ€™s also a rare piece of 19th century baseball memorabilia. We hope it finds a good home!

The remarkable provenance accompanying this piece cannot be overstated, especially when it relates to such a rare nineteenth-century Hall of Fame signature. Authenticity is always of paramount importance to autograph collectors and rare signatures, by their very nature, are the most difficult to authenticate in part because of the lack of exemplars. The fact that the offered piece comes directly from the family, and is accompanied by such a well-documented history, is probably the best assurance one can possibly have of its authenticity, outside of hopping in a time machine, setting the dial to 1889 and watching O'Rourke sign it personally. Adding to both the appeal and significance of this piece is that it was signed during O'Rourke's active playing career and is, to the best of our knowledge, the earliest known O'Rourke signature example.

O'Rourke was a member of the New York Giants' 1888 and 1889 World Championship clubs, and he finished the 1889 campaign with 3 home runs, 81 RBI, and a .321 average. Oâ€™Rourke played in the National Association, the National League, and the Player's League over the course of his nineteen-year career. One of the top hitters of his era, he finished his career with a .310 lifetime average and one batting title (1884 with Buffalo). He is also noteworthy for having made the first hit in National League history, in 1876. Twenty-eight years later, at the age of fifty-two, O'Rourke again made history by becoming the oldest player to play a complete game in the Majors. Coaxed out of retirement for one game by John McGraw, O'Rourke caught all nine innings for the Giants in a game against the Reds at the Polo Grounds on September 22, 1904. O'Rourke had one hit in four at bats as the Giants defeated the Reds 7-5 to clinch the National League pennant. O'Rourke originally retired after the 1893 season but remained in baseball in a number of capacities: managing in the minors, umpiring for one year in the Majors, and serving as president of the Connecticut League (which later became the Eastern Association). O'Rourke passed away in 1919 and was elected to the Hall of Fame in 1945. Although O'Rourke served in an official capacity for a number of years, his signature remains one of the most elusive of all Hall of Fame players.

The report card (5 x 6.5 inches) displays handling wear commensurate with its age and former use, including light, uneven, toning, a few small border tears and creases, and a tiny stain in the lower left corner. In Very Good condition overall. LOA from James Spence/JSA. Reserve $2,000. Estimate (open). SOLD FOR $11,850