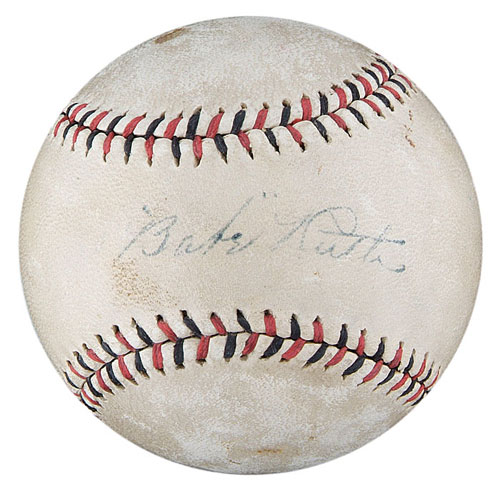 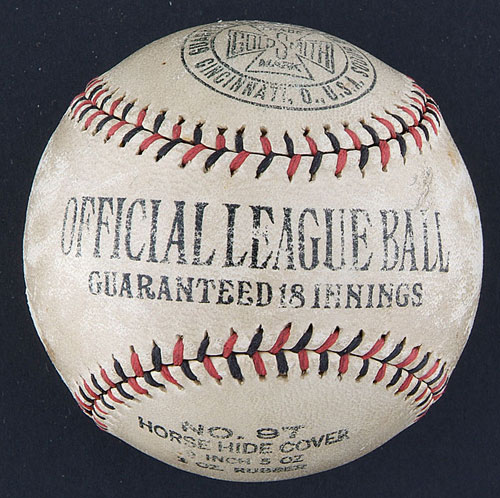 Goldsmith "Official League Ball" signed by Babe Ruth across the sweet spot. Ruth's signature has been scripted in blue fountain pen and grades "7." While we cannot accurately determine the year this ball was manufactured, the fact that Ruth has included quotation marks around the "Babe" portion of his signature probably dates it to the mid-to-late 1920s. (It is generally agreed that Ruth stopped using quotation marks in his signature sometime around 1928.) As such, it all but guarantees that Ruth signed this ball not only during his active playing career, but during his most prolific period as well. Ruth single-signed balls have always been, and still are, one of the most prized items in the hobby. Because of that, the demand still far outweighs the supply, ample as it may be. Early signed Ruth balls such as this example, however, are far rarer and more desirable. The ball is lightly toned with minor surface blemishes, including a few tiny areas of darker toning. All of the manufacturer's stampings remain bold and legible. In Very Good to Excellent condition overall. This is an outstanding early Ruth single dating from the height of his legendary career. LOA from James Spence/JSA. Reserve $2,000. Estimate (open). SOLD FOR $6,518