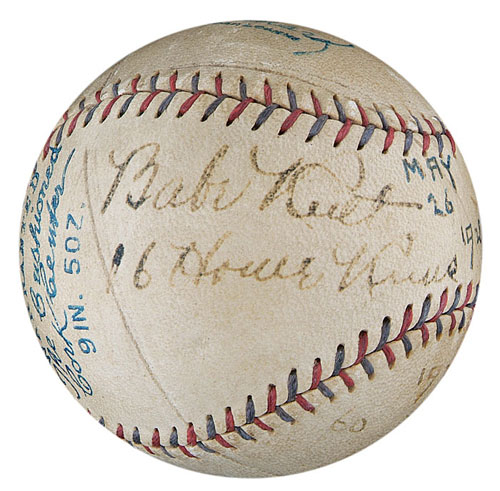 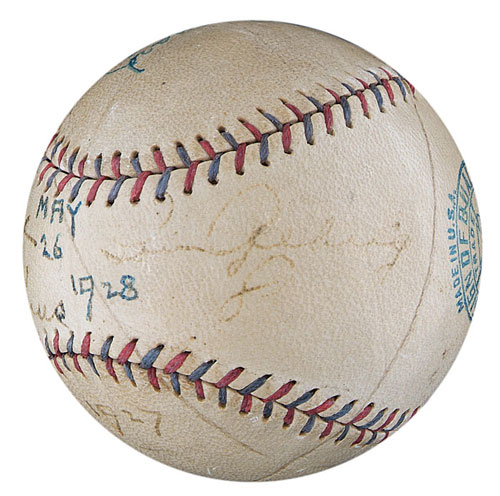 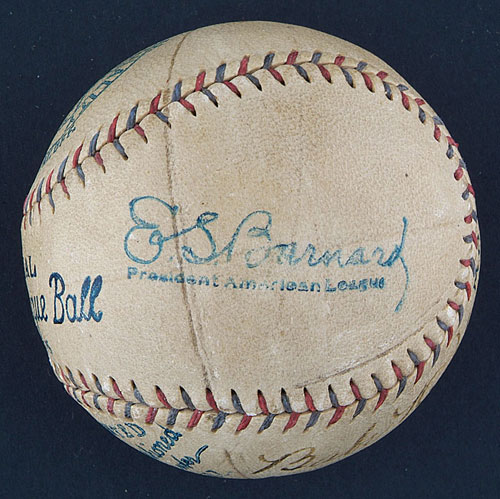 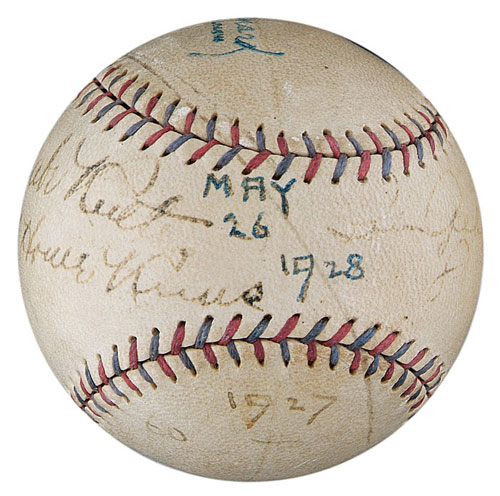 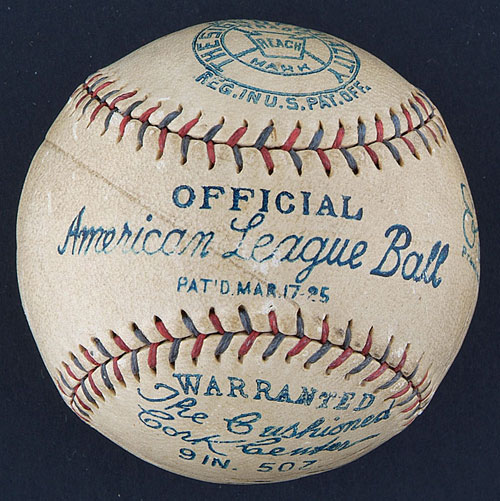 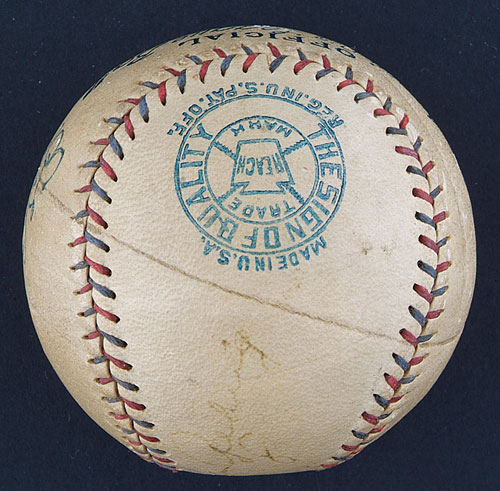 This remarkable Ruth/Gehrig inscribed "home run" baseball was signed on May 26, 1928, as defined by the notations and then-current home-run totals to that date for the year which have been added by Ruth and Gehrig, respectively, in their own hands, following each of their signatures. These notations alone date the signing of the ball precisely, and this date is further confirmed by an additional period notation written in black ink upon the sweet spot which reads "May 26, 1928." The unprecedented home run duel between the pair the previous season (Ruth hit a record 60 home runs and Gehrig 47), along with their wildly successful postseason tour, generated a tremendous amount of excitement heading into the 1928 season. Could Ruth once again break his own record? Would Gehrig finally eclipse Ruth in the home-run department? These were the questions on every fan's mind. The fact that Ruth began the season on a torrid pace only fueled the "home-run madness." For one lucky fan, that 1928 home-run race would forever be frozen in time due to the Hall of Fame duo's unique inscriptions upon this ball. The medium-toned Official American League (Barnard) ball has been signed in black ink by Ruth and Gehrig, respectively, on opposite side panels. In addition to autographing the ball, both players have also noted their respective home-run totals at the time of the signing. Ruth has added the notation, "16 Home Runs" below his signature while Gehrig has referenced his own home run tally by simply penning the number "8" underneath his name. Ruth's signature is the stronger of the two, grading "6/7." Gehrig's signature, while somewhat lighter in composition, remains perfectly legible and grades "4." Written in black ink on the panel below the sweet spot are the notations "1927" and "60," no doubt in commemoration of Ruth's record-breaking season the year prior. Ruth got off to an impressive start in 1928. On May 26th the Yankees defeated the Philadelphia A's by a score of 7-4 in Philadelphia. That win upped the Yankees' record to an amazing 30-7, but that was not the story fans were following. With 16 home runs at that point, Ruth was well on pace to top his record of the previous year and the fans were clamoring for more. Ruth didn't disappoint them. He continued to feast on American League pitching and by the end of July he had set a record for most home runs in a season up to that point with 41, a mark that still stands to this day. Unfortunately, despite being 27 games ahead of his previous year's home-run pace, the "dog days" of August took their toll on the fabled slugger and Ruth eventually finished the season with a league-leading 54 home runs. Gehrig, who was well off his 1927 total of 47, once again finished second to Ruth in the home-run column, belting 27 round trippers to go with his league-leading total of 142 RBI. On May 26, 1928, Ruth had a season total of 16 home runs, and Gehrig had 8, as duly noted in the hand of each slugger, thus memorializing, defining, and freezing in time a moment of history and excitement created by Ruth and Gehrig at the peak of their powers in a unique manner we have never before seen on any Ruth/Gehrig dual signed item. The ball displays two crisscrossing linear impressions that run along the entire circumference (resulting from the manner in which the ball was long ago previously displayed). Neither impression, however, affects the signatures and all of the manufacturer's stampings remain extremely bold, crisp, and bright. Very Good to Excellent condition overall. LOA from James Spence/JSA. Reserve $2,500. Estimate $5,000/$10,000. SOLD FOR $5,925