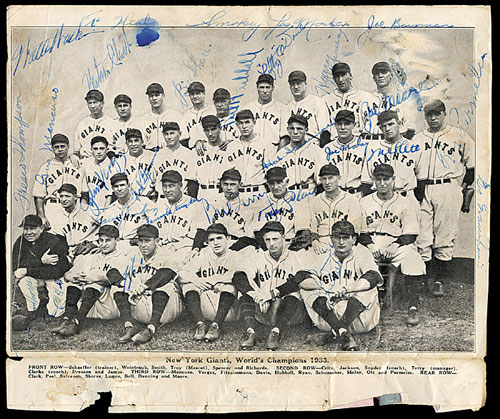 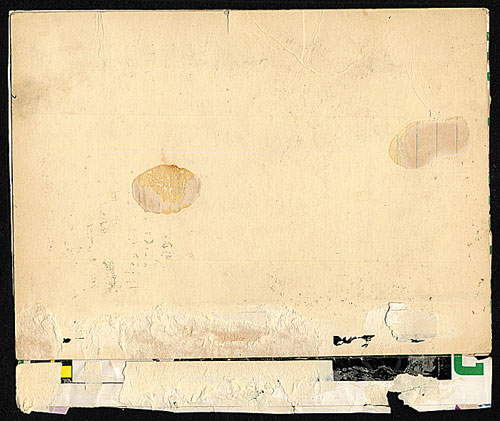 Magazine photo, capturing the 1933 World Champion New York Giants in a traditional team pose, signed in blue fountain pen by the following twenty members of the club: Ott ("9"), Terry ("8"), Hubbell ("7/8"), Jackson ("8"), O'Doul, Richards, Schumacher, Vergaz, Watkins, Moore, Mancuso, Danning, Fitzsimmons, Parmalee, Clark, Shores, Snyder (coach), Clarke (coach), Malay, and Schaeffer (team trainer). Although this photo pictures the 1933 Giants, it was obviously signed during spring training in 1934, as it includes the signatures of six players who either made the team in 1934 (but were not on the 1933 roster) or were in camp with the club that spring. The signatures of those six additional players, all of whom have signed in the border areas (because they are not pictured), are Fresco Thompson (1934), George Grantham (1934), Joe Bowman (1934), "Smokey Joe" Martin (he did not make the team in 1934, but played with the Giants in 1936), Francis Healy (traded from the Giants to the Cardinals in May of 1934), and one other (illegible). The signatures range in grade from "6" to "9," averaging "7/8." The photo (9.25 x 8 inches) has been affixed to a cardboard backing and displays a few areas of light staining resulting from the adhesive on the reverse, a small ink stain, and a number of minor creases and edge tears. In Very Good condition overall. LOA from James Spence/JSA. Reserve $200. Estimate $500+. SOLD FOR $593