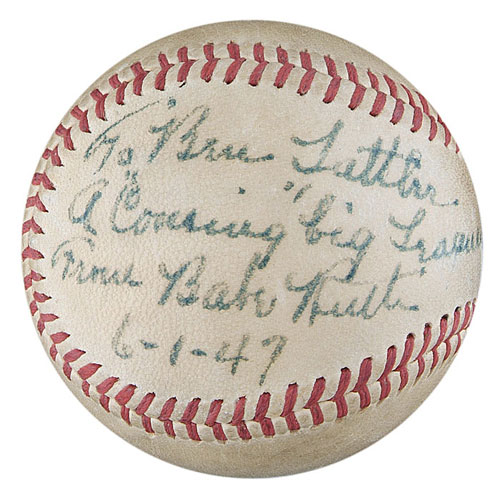 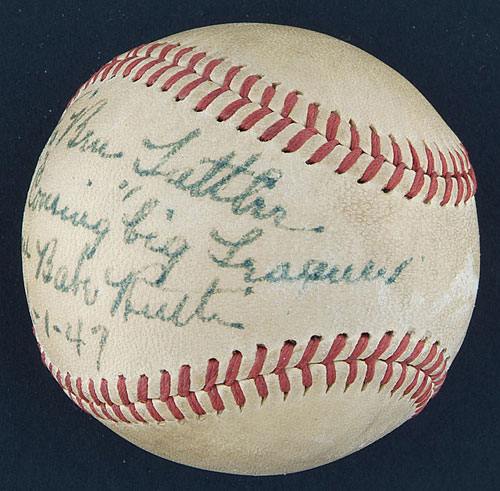 Official American League (Harridge) ball signed and personalized by Babe Ruth on a side panel. Ruth's black fountain-pen inscription, which encompasses the entire panel, reads "To Ben Lattler/A 'Coming' big leaguer/from Babe Ruth/6-1-47." Both the inscription and Ruth's signature grade a solid "8." Imagine the joy on the face of the young recipient who received this ball. It is one thing for a player's parent or coach to speak highly of his potential, but to receive an endorsement like this from Ruth himself must have been the greatest thrill of Ben Lattler's life to that point. The fact that the ball is dated June 1, during the summer, probably implies that Ruth attended a game in which Ben Lattler played and afterwards, when asked for his autograph, thought it fitting to include his professional opinion of the boy's performance. This is a phenomenal Ruth single-signed ball and must have been a treasured keepsake of Lattler, one that he could take great pride in showing his kids, and then his grandkids, just what the great Babe Ruth thought of his playing ability back in 1947. The ball is lightly toned throughout, and the manufacturer's stampings are light, but still partially legible. A few minor surface abrasions are evident throughout, but do not affect the signature panel. In Excellent condition overall. LOA from James Spence/JSA. Reserve $1,000. Estimate $2,500+. SOLD FOR $4,740