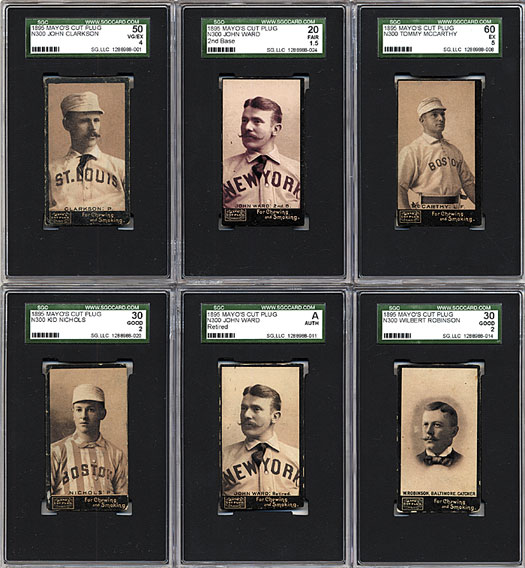 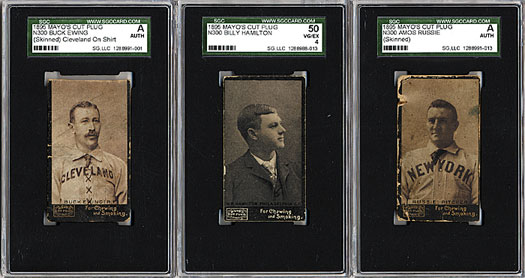 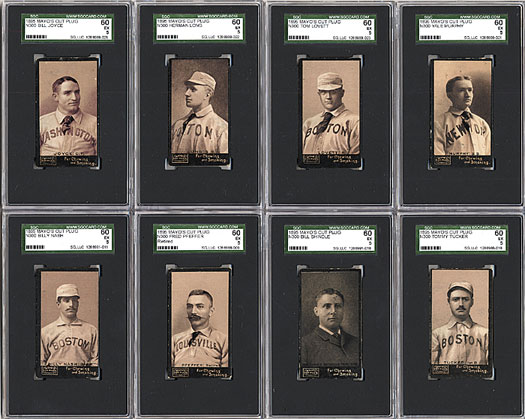 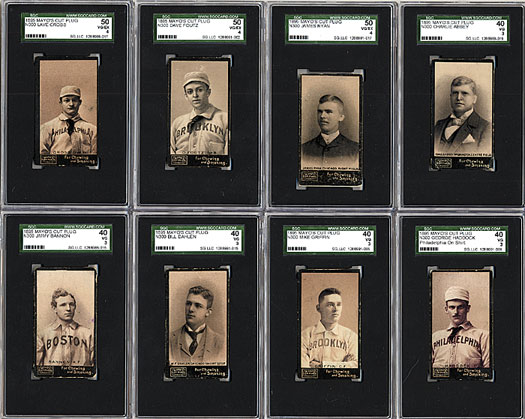 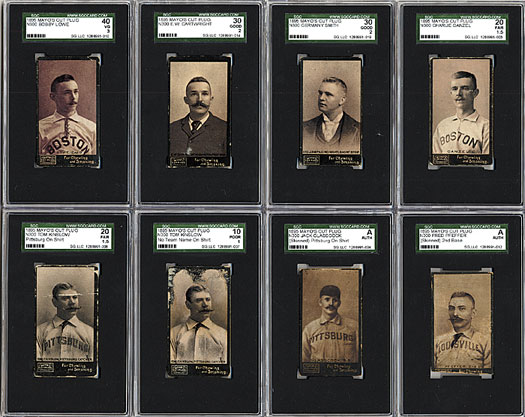 N300 Mayo's Cut Plug baseball collection of thirty-nine cards (out of forty-eight in the set). Extraordinary collection of the the most important baseball card set of the 1890s. Few cards were issued between the 1880s era of Old Judges and the 1910 tobacco-card bonanza. Without question, the premier issue of the decade is the N300 Mayoâ€™s Cut Plug set of 40 players plus 8 variations for a total of 48 cards. There are two types of cards: Type 1 features players in uniform and type 2 features players pictured in street clothes. There are eight variations in the set related to player uniforms and team designations. Mayo felt it necessary to update eight of the uniformed subjects due to trades and team changes. This suggests that Mayoâ€™s were produced and distributed over perhaps a two-year period (1894 and 1895) as opposed to only one year. This collection of thirty-nine different cards includes nine Hall of Famers and all but five of the forty different players that appear in the set. The five missing players include Hall of Famers Cap Anson, Dan Brouthers, Ed Delehanty, and Hugh Duffy (all offered as separate lots in the auction). The four additional missing cards (including Rusie, which is offered as a separate lot in the auction) are variation cards (the second Rusie is included here). All the cards have been professionally graded by SGC (all submitted by REA). SGC Condition Report: Three EX/NM 80: Kennedy, Latham, and Stocksdale. One EX+ 70: Glasscock - Louisville. Eleven EX 60: Corcoran, Hallman, Joyce, Long, Lovett, McCarthy (HOF), Murphy, Nash, Pfeffer - Retired, Shindle, and Tucker. Five VG/EX 50: Clarkson (HOF), Cross, Foutz, Hamilton (HOF), and Ryan. Six VG 40: Abbey, Bannon, Dahlen, Griffin, Haddock - Philadelphia, and Lowe. Four GOOD 30: Cartwright, Nichols (HOF), Robinson (HOF), and Smith. Three FAIR 20: Ganzel, Kinslow - Pittsburg, and Ward - 2ND Base (HOF). One POOR 10: Kinslow - no team. Five Authentic: Ewing - Cleveland (HOF, skinned), Glasscock - Pittsburg (skinned), Pfeffer - 2ND Base (skinned), Rusie â€“ name misspelled â€œRussieâ€ (HOF, skinned), and Ward - Retired (HOF, color added on the edges). Mayos appear to have been targeted primarily for a New England audience as a full 25% of the subjects were with the Boston Nationals while the more glorified Baltimore Orioles, pennant winners in 1894 and 1895, were represented by only two players (Dan Brouthers and Wilbert Robinson). While the issue fails to include such notables as Willie Keeler, John McGraw, Hughie Jennings, Joe Kelley, Sam Thompson, and Cy Young, included are many players who do not appear in any other baseball-card issue, and for most players this is the only set they appear in from the 1890s. This is a very substantial collection of thirty-nine different N300 Mayo's Cut Plug, in mixed grade, and with an appearance stronger than suggested by their technically accurate assigned grade. It is very rare that such a large group of these early classics is offered at a single time. This near-set has been consigned by the family of one of the hobby's great pioneer collectors who assembled the set decades ago in the early days of organized collecting. The equivalent SMR value for the individual cards (not including the five cards encapsulated authentic) is $29,670. Total: 39 cards. Reserve $5,000. Estimate $10,000/$15,000++.
SOLD FOR $23,700