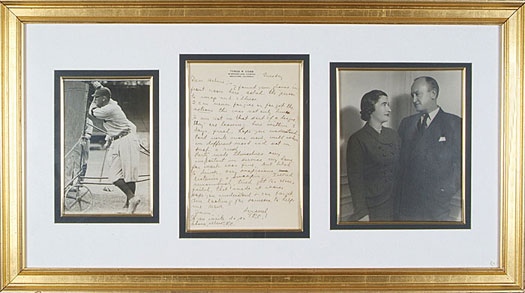 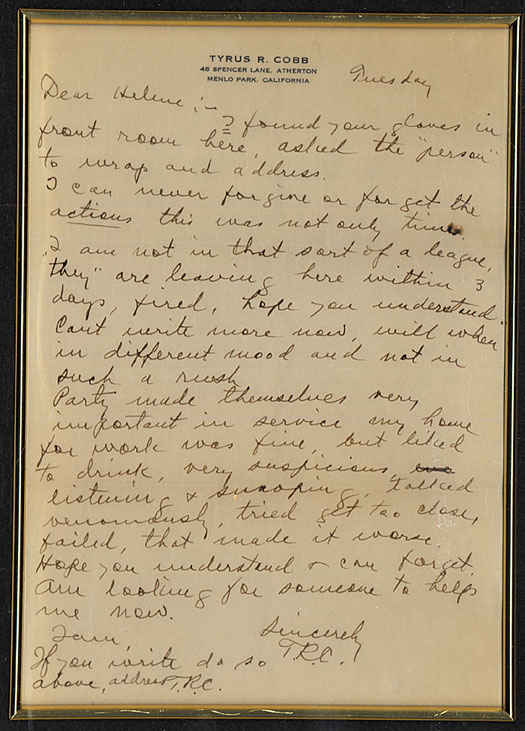 One-page handwritten letter, undated, signed (initials only) by Hall of Fame outfielder Ty Cobb. In his letter, penned on his "Menlo Park, California" letterhead, Cobb writes to his friend Helene Champlain and apologizes for the conduct of his household staff. In full:

Dear Helene - I found your gloves in front room here, asked the "person" to wrap and address. I can never forgive or forget the actions this was not only time. I am not in that sort of league, "they" are leaving here within 3 days, fired. Hope you understand can't write more now, will when in different mood and not in such a rush. Party made themselves very important in service my home for work was fine, but liked to drink, very suspicious listening + snooping, talked seriously, tried to get too close, failed, that made it worse. Hope you understand + can forget. Am looking for someone to help me now. I am, Sincerely, T. R. C.
The postscript reads "If you write do so above address, T. R. C." Both the text and Cobb's initials are scripted in black ink and grade "10." Helene Champlain was a book dealer and collector who managed the bookstore at the Waldorf Astoria Hotel in New York City for nearly two decades (late 1940s through the early 1960s). Cobb was one of her close friends and the two corresponded frequently. This is one of several letters from Cobb to her that we have seen over the years. The letter (7 x 10 inches) is slightly toned and displays two horizontal mailing folds; otherwise in apparent Near Mint condition. Accompanied by the original mailing envelope (7.5 x 4 inches), postmarked August 24, 1948, and addressed (in Cobb's hand) to "Miss Helene Champlain c/o Hotel Waldorf Astoria Book Store." Cobb's preprinted return address appears on the reverse of the envelope (Vg-Ex). The letter is matted and framed together with a photo (5.5 x 8 inches) of Cobb as a member of the Detroit Tigers and a photo (8 x 9 inches) of Cobb posing together with a woman who, presumably, is Helene Champlain. Total dimensions: 31.5 x 17.5 inches. LOA from James Spence/JSA. Reserve $300. Estimate $500/$1,000. SOLD FOR $830