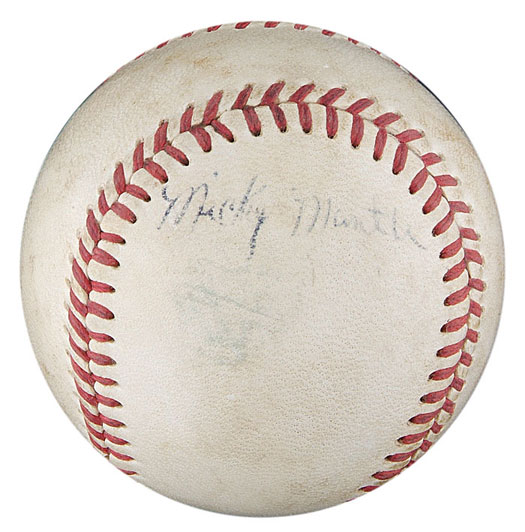 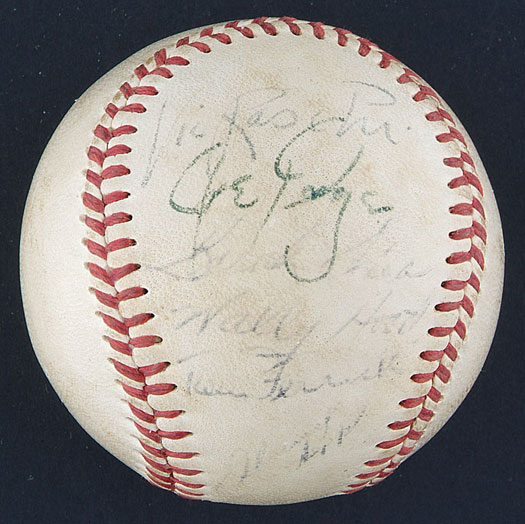 1951 Mickey Mantle Spring-Training Signed Baseball - One of the Earliest Mantle Signatures (as a Member of the New York Yankees) In Existence!

In 1951, for the first and only time in the club's history, the Yankees headed West instead of South for spring training, opening camp in Phoenix, Arizona. While news of DiMaggio's impending retirement at season's end was already circulating, it wasn't the biggest story in camp that spring. Most of the media attention was focused on a young outfielder who could hit with incredible power from both sides of the plate and run like a deer. His name was Mickey Mantle and his performance in the desert was already drawing comparisons to Ruth, Gehrig, and, in hushed tones, even DiMaggio. Offered here is both a rare and highly desirable memento commemorating that historic 1951 Yankees spring training: a ball (manufacturer's stampings no longer legible) signed by Mantle and a few of his Yankees teammates. Because this ball dates from spring training of 1951, it holds the distinction of being one of the earliest balls ever signed by Mantle as a member of the New York Yankees. It is also accompanied by a letter of provenance from the original owner detailing its history. Ideally, Mantle's signature, penned in blue ink (grading "5/6"), sits alone on a side panel, so the ball can be displayed as a Mantle single if so desired. Situated on the side panel directly opposite that of Mantle's signature are the blue-ink signatures (averaging "5/6") of Vic Raschi, Joe Page, Spec Shea, Wally Hood, Tom Ferrick, and Johnny Hopp. (Interestingly, neither Joe Page nor Wally Hood made the team that year.) In the accompanying one-page handwritten letter, signed by the ball's original owner, from whom our consignor obtained it, he chronicles the ball's history. In full: "In 1951, my father took me to a spring training game in Phx, AZ., the only year the Yankees ever trained in Az. This being that Del Webb was part owner of the Yankees. At the game I was fortunate to get a foul ball when Joe DiMaggio was at bat. My father suggested we go downtown Phx to the Adams Hotel where the Yankees were staying to get a few autographs. I was hoping to get Joe D autograph but we never saw him. I got a few autographs but the one I remember the most was when I went up to a very young man and asked if he was a ball player. He said yes in the shiest way and signed my ball. I looked and it said Mickey Mantle. At that point he became my favorite player." The red-stitched ball displays moderate soiling, commensurate with its having been used in a game, and the manufacturer's stampings have faded beyond legibility. In Very Good condition overall. This is a magnificent early Mantle signed ball, especially since it displays as a single, and the only ball we have ever seen dating from his 1951 Yankee debut in spring training. LOA from James Spence/JSA. Reserve $300. Estimate (open). SOLD FOR $830