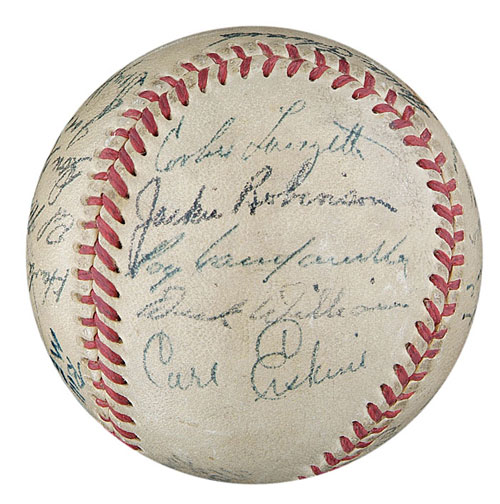 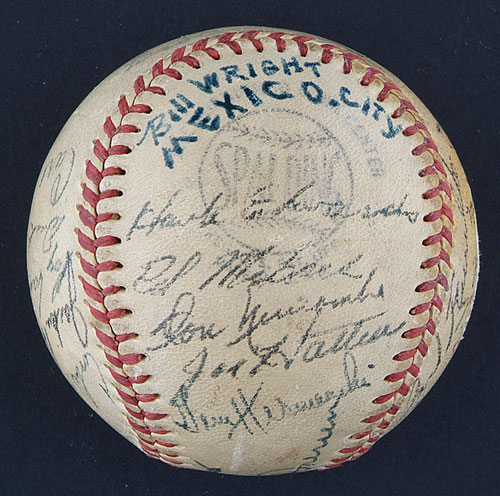 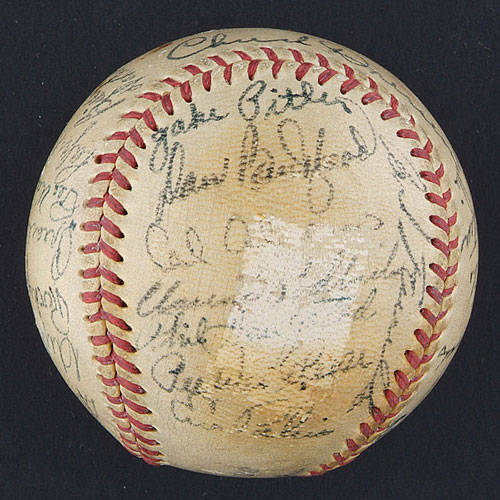 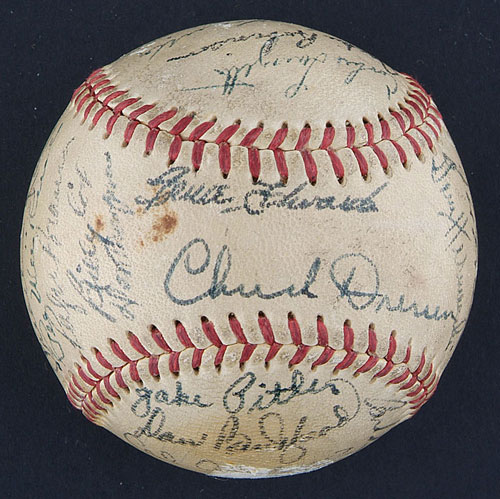 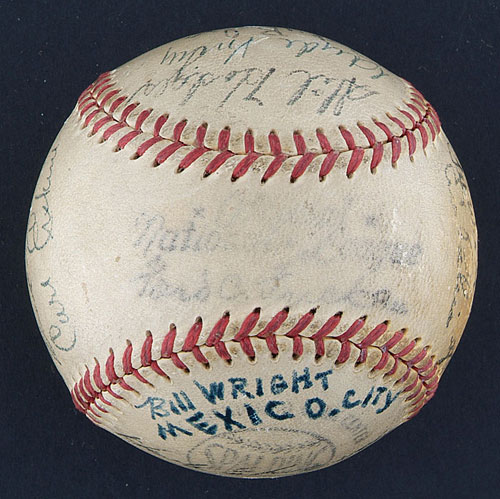 Dating from the most tragic season in franchise history, this official National League (Frick) ball has been signed in either black or blue ink by twenty-seven members of the 1951 Brooklyn Dodgers. The signatures represented here are those of Robinson, Campanella, Reese (twice), Williams, Dressen (sweet spot; Mgr.), B. Edwards (sweet spot), Hodges, King, Bridges, Roe, Branca, Cox, Thompson, Hermanski, Hatten, Newcombe, Miksis, H. Edwards, Furillo, Pitler (coach), Bankhead, Abrams, Podbielan, Haugstad, Palica, Erskine, and Lavagetto (coach). Signatures range from "3" to "8," averaging "6/7." What makes this ball particularly interesting is a vintage blue-ink notation on a side panel that reads "Bill Wright/Mexico.City." Given the combination of the name and locale, we can only assume that it refers "Wild Bill" Wright, one of the top players in Negro League history, who also enjoyed a long and successful career in the Mexican League (thirteen seasons total, including 1946-1956). The fact that Wright's name is on this ball might indicate that it was once owned by him. Obviously, a number of the Dodger players knew Wright, especially those players who had formerly played in the Negro Leagues, such as Robinson, Campanella, and Newcombe (Campanella even played in the Mexican League for a number of seasons before joining the Dodgers in 1948). The Dodgers trained in Miami, Florida, in 1951, but unfortunately our research has failed to discover whether or not the club played any exhibition games in Mexico that spring, or if any Mexican clubs traveled to Miami to play the Dodgers. The ball, which is lightly toned and soiled, displays a rectangular area of adhesive residue on a side panel as a result of tape removal that affects one of the Reese signatures, as well as those of Palica, Haugstad, Podbielan, and Abrams. The manufacturer's stampings are light, but legible. In Very Good condition overall. LOA from James Spence/JSA. Reserve $300. Estimate $500/$1,000. SOLD FOR $1,185