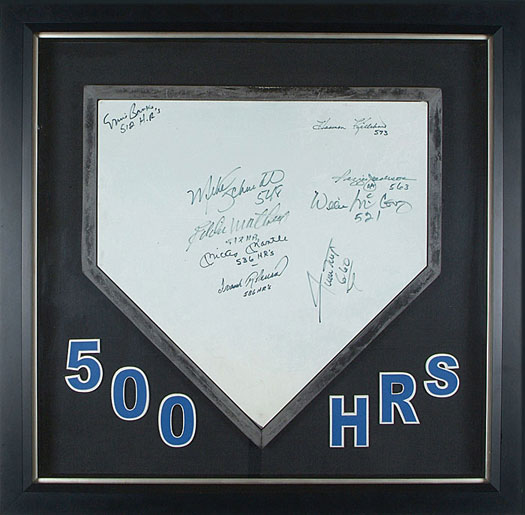 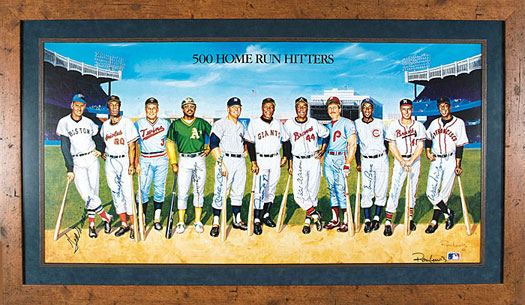 Two large-format display pieces, one familiar, one unusual, each signed by members of baseball's elite 500 Home Run Club. 1) 1988 Ron Lewis 500 Home Run Club poster. These posters, which were produced in conjunction with the now-famous 500 Home Run Club signing show held in Atlantic City, New Jersey, in 1988, were offered for sale (unsigned) to patrons for use in obtaining the signatures of all eleven then-living members of the Club pictured on the piece. Obviously, the original owner of this piece was successful in that quest, with each member having signed the piece (in either blue or black Sharpie) atop his image: Ted Williams, Frank Robinson, Harmon Killebrew, Reggie Jackson, Mickey Mantle, Willie Mays, Hank Aaron, Mike Schmidt, Ernie Banks, Eddie Mathews, and Willie McCovey. All of the signatures grade either "9" or "10" and the poster (36 x 18 inches) is in apparent Near Mint condition. Matted and framed to total dimensions of 43 x 25.5 inches. 2) 500 Home Run Club signed home plate. Regulation-size rubber home plate, signed on the front in blue Sharpie by nine members of the 500 Home Run Club: Mickey Mantle, Willie Mays, Eddie Mathews, Mike Schmidt, Ernie Banks, Frank Robinson, Harmon Killebrew, Reggie Jackson, and Willie McCovey. Ideally, each player has included his lifetime home-run total alongside his name. The Mantle, Robinson, and Banks signatures grade "9/10," while the others grade "7/8" (mainly due to the less-than-ideal rubber writing surface). The plate measures 18.5 x 19 inches (including the black border) and has been framed to total dimensions of 27.5 x 27 inches. Total: 2 items (poster and home plate). LOA from James Spence/JSA. Reserve $500. Estimate $1,000++. SOLD FOR $1,659