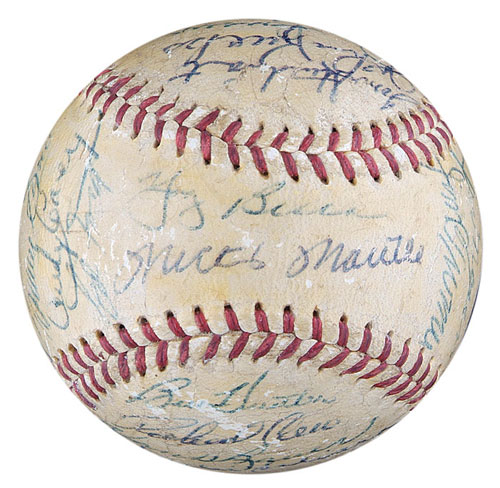 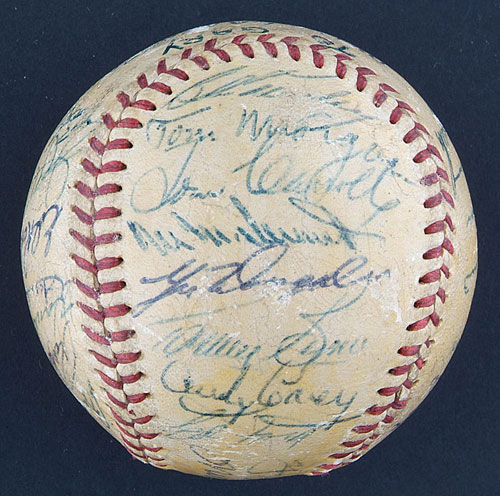 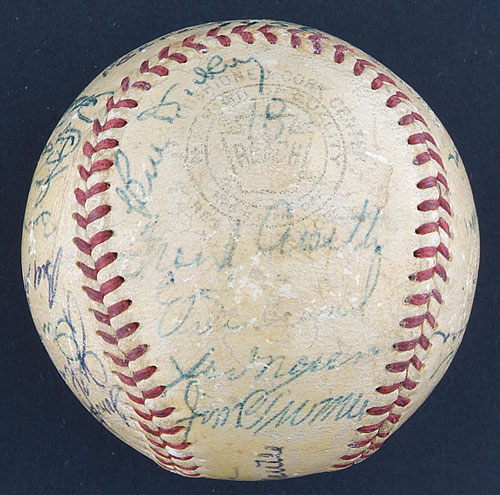 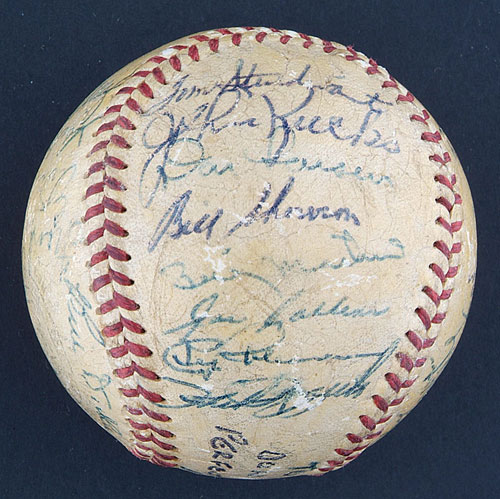 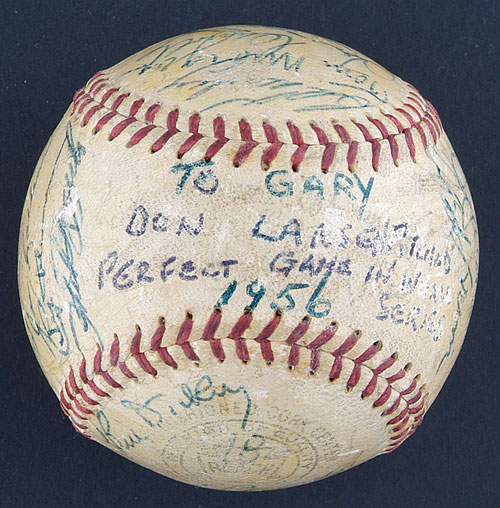 Official American League (Harridge) ball signed in varying shades of blue ink by the following twenty-nine members of the 1956 World Champion New York Yankees: Mantle (sweet spot), Berra (sweet spot), Ford, Rizzuto, Dickey (coach), Larsen, Martin, Sturdivant, Kucks, Skowron, Collins, R. Coleman, Grim, J. Coleman, Robinson, Silvera, Bauer, Cerv, Hunter, Crosetti (coach), Howard, Turner (coach), Noren, Turley, Morgan, Carroll, Byrne, Carey and one other (illegible). Signatures range from "3" to "8," averaging "7." Our consignor has always believed this to be a game-used baseball from Don Larsen's perfect game in the 1956 World Series, and he purchased it as such at public auction in 1991. That belief is based upon a vintage personalization and notation appearing on the ball label. The personalization, printed in blue ink, reads "To Gary/1956." Printed in between the salutation and the year, in a different shade of blue ink, is the notation "Don Larsen Pitched/Perfect Game in World/Series." Unfortunately, the fact that Eddie Robinson's name appears on this ball, probably makes its use in Larsen's perfect game impossible. The Yankees traded Robinson to the Kansas City Athletics on June 14, 1956; therefore, he would not have been in the clubhouse to sign this ball following Larsen's perfect game in the World Series later that year. Despite that fact, this ball can at least be traced back directly to Don Larsen. In examining a side panel, one can clearly see the number "18" written in vintage blue ink. Don Larsen wore number "18" in 1956. During that era, clubhouse attendants normally wrote the players' uniform numbers on balls, for inventory purposes, when team balls were lined up for signing for fellow players, other members of the Yankees organization, and special dignitaries. That way, the other players knew for whom the ball was being signed, and the attendants knew who to give it to afterwards. Given that fact, it may very well be Larsen who personalized the ball, with the "perfect game" notation added after the Series. Regardless, the ball remains notable for the number of signatures upon it and, most important, for the fact that it is free of any "clubhouse" examples, which are frequently found on balls from this era. The ball has been coated with a light layer of protective shellac and displays a number of minor abrasions throughout. The manufacturer's stampings are badly faded. In Very Good condition overall. LOA from James Spence/JSA. Reserve $400. Estimate $800/$1,200. SOLD FOR $1,185