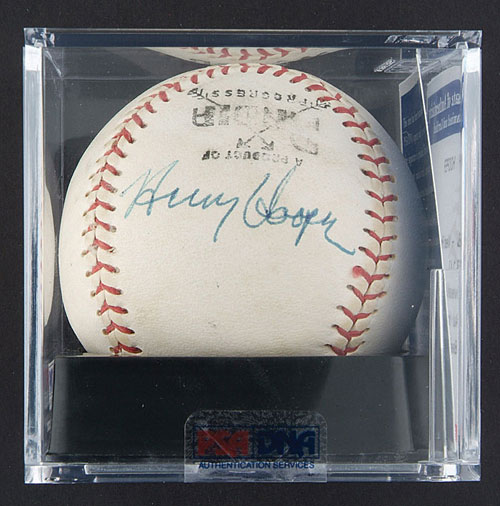 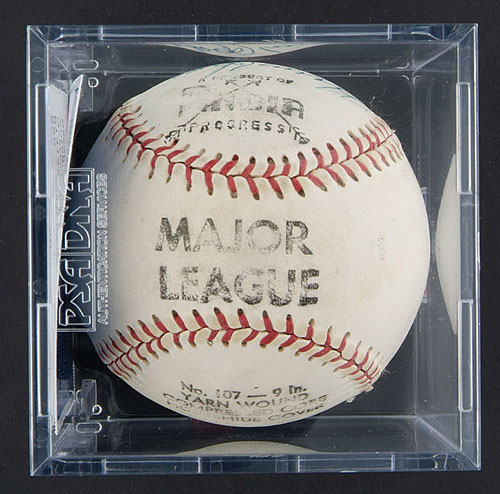 "Major League" baseball (manufacturer's stamp illegible) signed by Harry Hooper in blue ink on a side panel. Graded "7" by PSA/DNA (signature graded "8" and the ball itself "6," which resulted in its final overall grade of "7"). This is a magnificent Harry Hooper single-signed ball and not only is it the first graded example we have ever offered, but also the first we have ever seen. Even though Hooper was elected to the Baseball Hall of Fame in 1971, Harry Hooper single-signed baseballs remain relatively rare due to the fact that he passed away in 1974, long before autographs in general, and single-signed balls in particular, became high-priced commodities. This ball most likely dates from the 1960s and was probably signed by Hooper during that time as well. Hooper was eighty-seven when he passed away and most items signed by him during his last few years (after he was elected to the Hall of Fame) display a much slower, more deliberate signature style than that shown here. Harry Hooper is probably best remembered today as a member of what was perhaps the greatest outfield trio in baseball history. For eight years (1910-1917) Hooper, Tris Speaker, and Duffy Lewis ably patrolled the outfield grounds at Fenway Park, and their exceptional play was largely responsible for the club's three World Championships during that span. Hooper was also quite proficient at the plate. As the Red Sox leadoff hitter, he consistently "set the table" for the hard-hitting Speaker and Lewis. Hooper finished his career with 2,466 hits and a .281 average. The ball remains housed in its original, sealed PSA/DNA ball cube, complete with its original COA ("P13142") enclosed. Additional LOA from James Spence/JSA. Reserve $1,000. Estimate $2,500++ . SOLD FOR $2,252