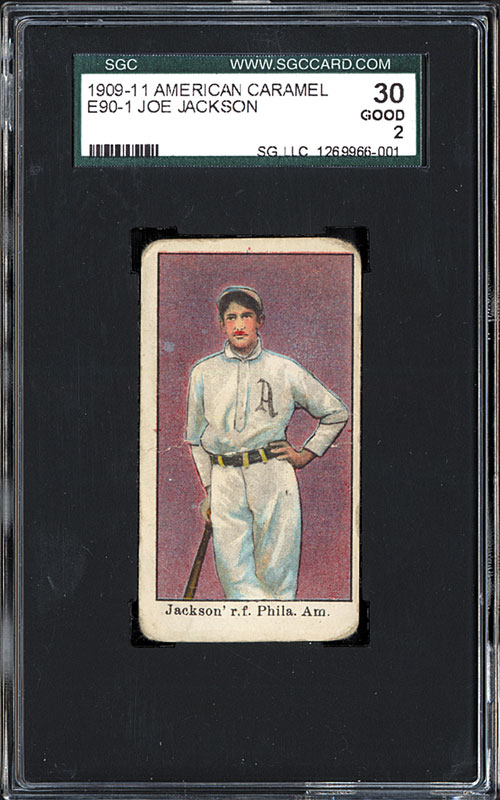 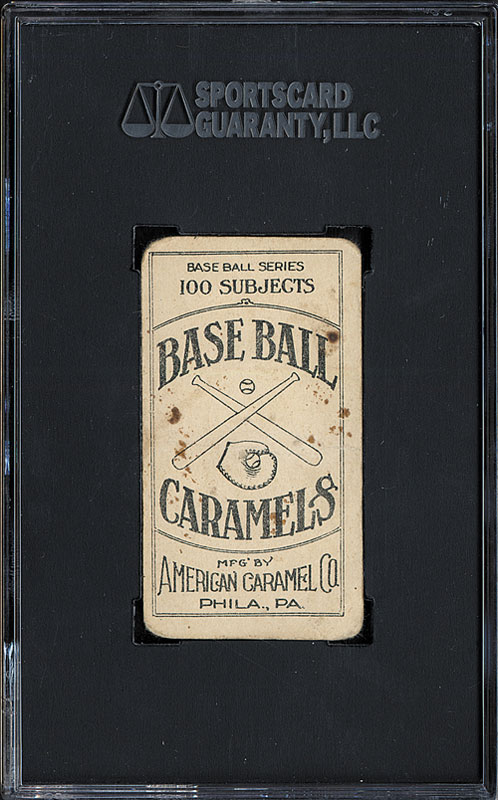 Graded GOOD 30 by SGC. This extremely rare and desirable E90-1 American Caramel card of the legendary Joe Jackson is one of only a handful of cards of Joe Jackson issued during his playing days, and is indisputably recognized as Joe Jackson's rookie card. This card is also one of the rarest in the entire E90-1 American Caramel card set. In recent years the E90-1 American Caramel Joe Jackson has become universally recognized as one of card collecting's most valuable and famous vintage-card rarities. Jackson was always a very rare card in the E90-1 set, but in recent years it has become all the more apparent that this card is truly the key to the set. A few sets of E90-1 have been offered in recent years, but more often than not, they are really sets minus one card: Jackson. This card dates from extremely early in Joe Jacksonâ€™s career, when he was a member of Connie Mackâ€™s Philadelphia Aâ€™s. Jackson played only ten games with the Athletics before Mack traded him to Cleveland. Light creasing, evenly rounded corners, and a few scattered spots (possibly caramel stains) on the reverse allow for a grade of only GOOD, but this is still a very attractive example of this extremely rare and important card, superior to many others we have seen, and one that (like a low-grade Wagner to T206 collectors) will always be of great interest to E90-1 and Joe Jackson collectors. (And remember: very few E90-1 Jacksons exist in high grade. Good condition for an E90-1 Jackson is statistically much more significant than Good condition for most tobacco cards.) This is a very attractive mid-grade example of one of card collecting's most legendary cards. The equivalent SMR value for the assigned grade is $11,000. Reserve $2,500. Estimate $5,000+.
SOLD FOR $9,480