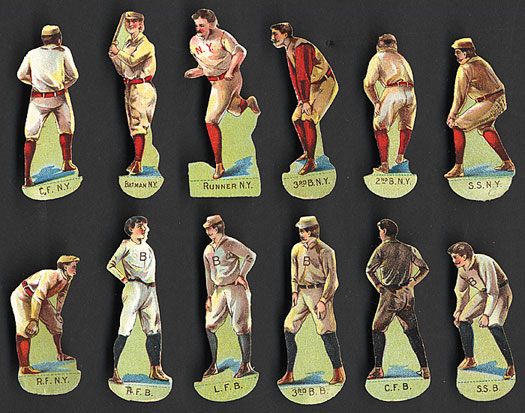 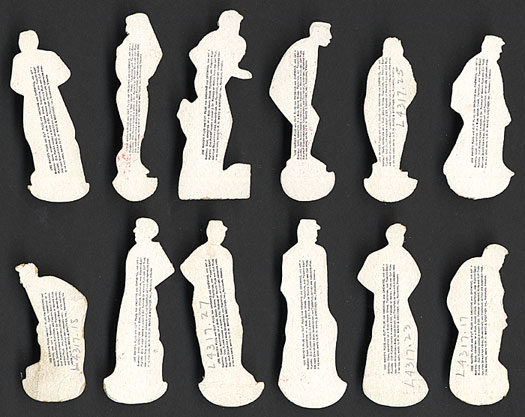 Near-complete set of eighteen different (out of twenty-eight) 1896 N301 Game Card die-cuts issued by P. H. Mayo & Brother, Inc. of Richmond, Virginia. Missing ten cards (Pitcher - NY, Pitcher - Boston, 2nd Base - Boston, Catcher - NY, Runner - Boston standing upright, Runner - Boston bent slightly forward, Runner - Boston bent well forward, Runner - NY bent well forward, umpire - facing front, and Field Umpire - rear view) for completion. Extremely bright, crisp, and fresh. Six cards range from Ex to Ex-Mt condition, three are Vg, and nine are Gd (due to pencil marks). The Mayoâ€™s Game Card die-cuts are a particularly interesting issue, and are unique among diecut game cards because they feature advertising on their reverses, and are a catalogued tobacco-card set. The reverse of each card, in very tiny print, reads as follows: "Use Mayo's Cut Plug for smoking and chewing and get a Baseball Game consisting of a Base, Grandstand, Teetotum, and Twenty-Eight Players. One Player packed in every 2 Oz. package of Mayo's Plug and Cut Plug. Ask your dealer for a Base, Grand-Stand, and Teetotum, as they are furnished FREE. If he has none, write to P.H. Mayo & Brother, Inc, Richmond, Virginia." While this issue has been overlooked by most collectors in large part because they do not feature likenesses of actual ballplayers, they are very distinctive and as rare or rarer than many other nineteenth-century card issues. This is a very attractive collection of these rare, unusual, and very colorful nineteenth-century baseball die-cut cards. Total: 18 cards (of the 28 in the set). Reserve $200. Estimate $400/$600. SOLD FOR $593