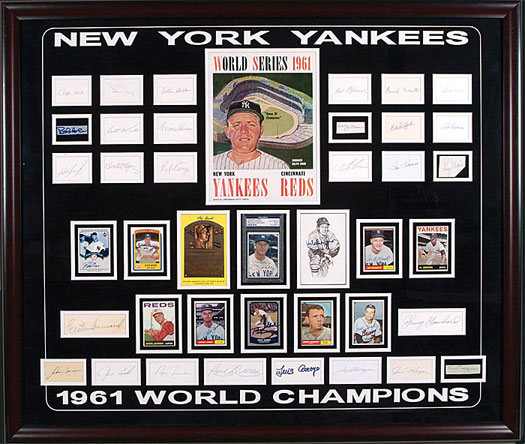 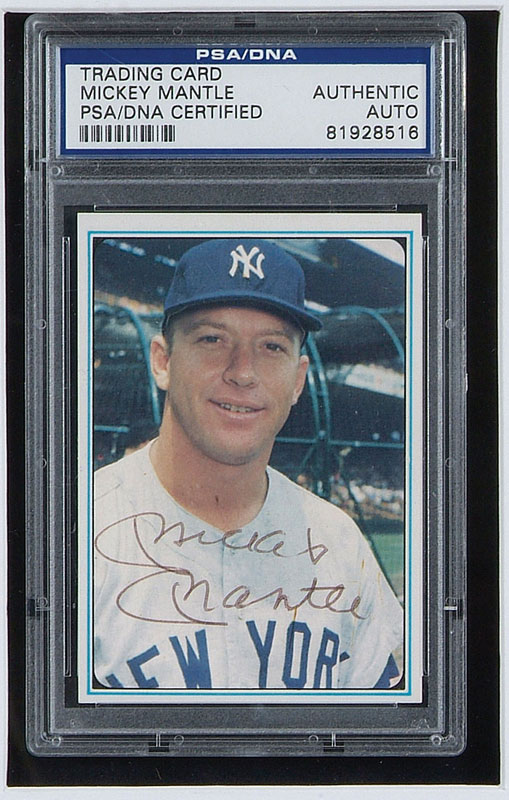 This large and impressive framed display piece commemorates one of the most legendary ball clubs in history: the 1961 New York Yankees. The design of the piece features a color copy of the cover of a 1961 New York Yankees World Series program, surrounded by signature examples of the following forty team members: Houk (Mgr.), Mantle, Maris, Skowron, Richardson, Kubek, Boyer, Berra, Howard, Lopez, Blanchard, Cerv, Gardner, DeMaestri, Reed, Torgeson, Gonder, Johnson, Hale, Tresh, Thomas, Ford, Terry, Arroyo, Stafford, Coates, Sheldon, Daley, Turley, Reniff, Ditmar, Clevenger, McDevitt, Downing, Duren, James, Moses (coach), Crosetti (coach), Hegan (coach), and Sain (coach). The majority of the signatures, which have been penned in a variety of inks (grading "9" or "10"), appear in the form of cuts; however, trading cards (mostly modern-day issues) and postcards are also represented. Mantle's signature appears on a modern-day trading card that has been encapsulated by PSA/DNA, while Maris' signature is a cut taken from a multi-signed sheet that originally received an LOA from PSA/DNA (the original PSA/DNA LOA accompanies the display, as does a portion of the original sheet). All of the cuts, cards, and postcards are in apparent Near Mint condition, with the exception of Johnson (crease in the card) and Howard (moderate staining to the cut). This is a remarkable near-complete 1961 New York Yankees signature collection that includes thirty-five of the thirty-six official roster players as well as manager Ralph Houk and all four coaches. Only pitcher Duke Maas, who appeared in just one game that season, is missing for completion. The 1961 New York Yankees are one of the most celebrated teams in history, due in part to the historic home-run duel waged between the famed "M&M Boys," Mantle and Maris. The pair combined for 115 home runs, helping the Yankees establish a new single-season record for home runs by a club, with 240 (since broken). They also won 109 games en route to capturing the first of two consecutive World Championships. This is an exceptional 1961 Yankees signed display piece, with extraordinary visual appeal, ideal for prominent home or office display as intended. Total Dimensions: 41 x 35 inches. The substantial size/weight of this item requires that there will be a shipping charge for this lot (which will vary depending upon where it is being shipped). The shipping charge will be billed separately from the auction invoice. LOA from James Spence/JSA. Reserve $500. Estimate $1,000++. SOLD FOR $1,185