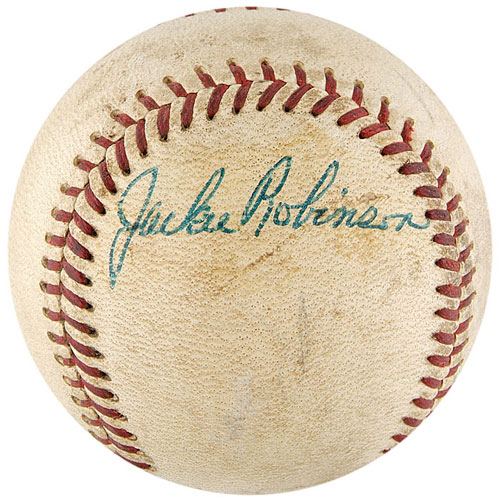 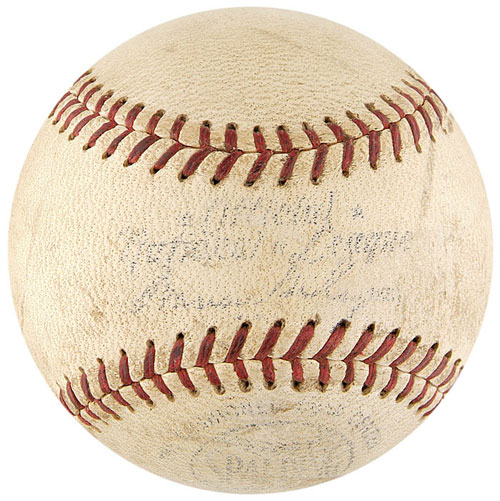 Official National League (Giles) ball signed in blue ink by Jackie Robinson on a side panel. Robinson's signature has been boldly scripted, grading "9/10," making this an exceptionally desirable single-signed example. Adding to its appeal is the fact that this ball was most likely signed by Robinson during his active playing career. The ball dates from the 1952-1957 manufacturing period and Robinson retired after the 1956 season; therefore, the odds are that Robinson was a member of the Dodgers when he scripted his name upon it. Jackie Robinsonâ€™s ability on the field notwithstanding, he is also one of the most important figures of the twentieth century due to his breaking of baseballâ€™s color barrier in 1947. That courageous feat not only paved the way for full integration over the next few years but also signaled a turning point with regard to racial equality in American society. Jackie Robinson single-signed balls rank among the most desirable of all postwar Hall of Famer signed balls, especially those featuring high-grade signatures. Jackie Robinson single-signed balls, like those of Babe Ruth, are among the few with a significance that transcends the world of sport. Though Robinson died in 1971 and Ruth in 1948, Robinson received far fewer requests for his signature alone on a ball, and baseballs single-signed by him are actually considerably rarer, by quite a large margin, than those of Ruth. Robinson's signature has been coated with a thin layer of protective shellac and the ball is moderately toned throughout, including a number of light surface blemishes (none of which affect Robinson's signature). The manufacturer's stampings are light, but legible. In Very Good condition overall. The few condition anomalies notwithstanding, the boldness of Robinson's signature truly distinguishes this ball as one of the finer examples we have handled and one that would be a significant highlight in any Hall of Fame single-signed ball or Brooklyn Dodgers collection. LOA from James Spence/JSA. Reserve $1,000. Estimate $2,500+. SOLD FOR $14,220