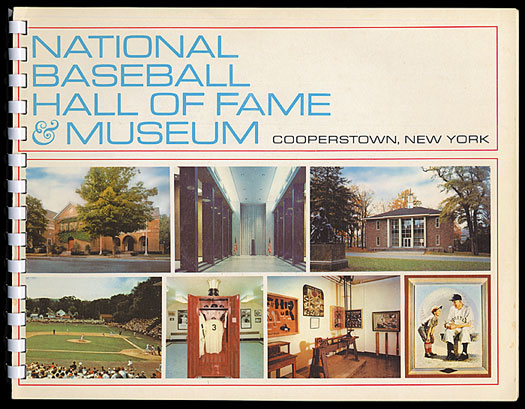 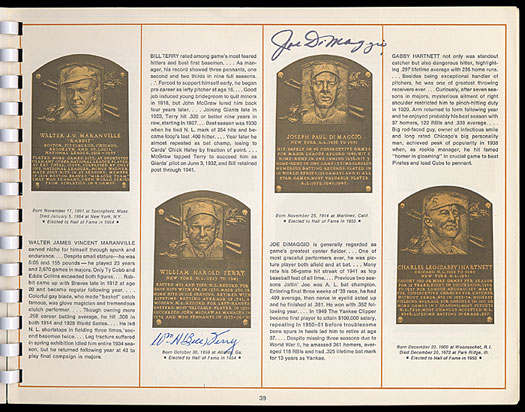 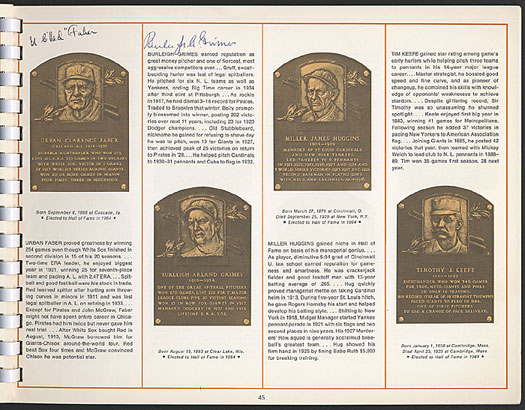 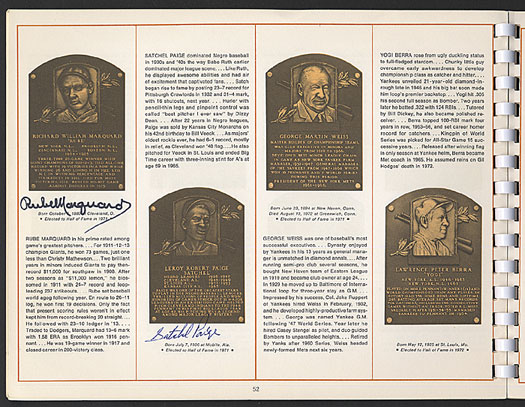 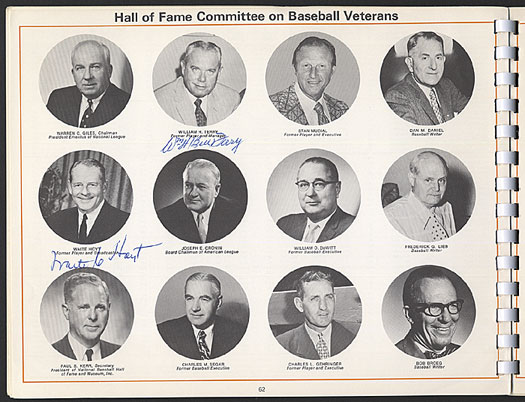 1974 Baseball Hall of Fame yearbook signed on the interior by twenty-nine Hall of Fame players (twenty-six different), plus Mrs. Babe Ruth. All of the signatures, penned in a variety of inks, appear either above or below the player's respective Hall of Fame plaque photo. The players represented here are Gehringer, Terry, DiMaggio, Greenberg, McCarthy, Carey, Roush, Appling, Faber (secretarial), Grimes, Ruffing, Waner, Medwick, Coveleski, Hoyt, Boudreau, Frick, Marquard, Paige, Gomez, Leonard, Irvin, Kelly, Spahn, Bell, and Conlan. Also signed by "Mrs. Babe Ruth" next to her image. Terry, Hoyt, and Appling have each signed the book twice. In addition to signing next to their respective plaques, both Terry and Hoyt have signed the book on page sixty-two next to their photos as members of the Hall of Fame Committee on Baseball Veterans. Appling has signed his name twice next to his plaque; one is a rare full-name signature, "Lucius Benjamin Appling," while the other is the more common "Luke Appling." Signatures range from "8" to "10," averaging "9." Ideally, all of the signatures in this book were obtained by our consignor in 1974, or shortly thereafter. It should be noted that the Baseball Hall of Fame yearbook was not issued in spiral format from 1974 on. The consigner had this one converted at a print shop. Aside from that alteration, the sixty-six-page book is in Excellent to Mint condition overall, with just a very small crease along the upper border of each cover. Together with a Near Mint 1974 Hall of Fame brochure. This is an extraordinary signed Hall of Fame item. LOA from James Spence/JSA. Reserve $400. Estimate $800/$1,200. SOLD FOR $948