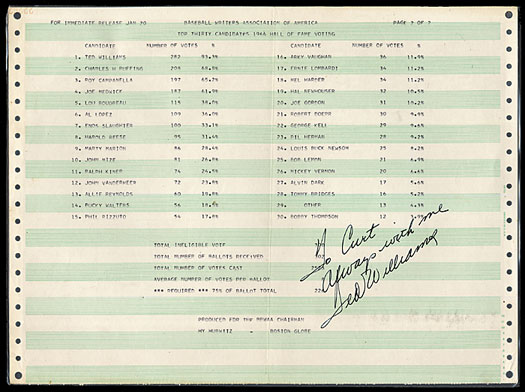 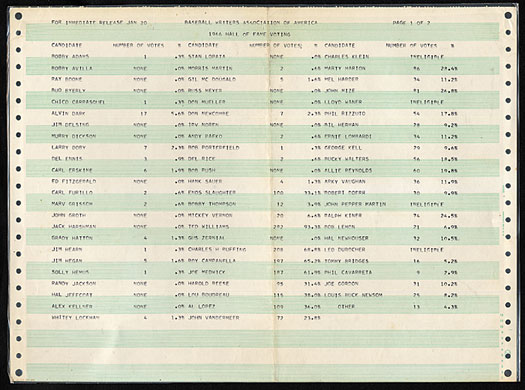 On the morning of January 20, 1966, the day the results of the Baseball Hall of Fame balloting were to be announced, Ted Williams sat patiently in the Red Sox rooftop press room at Fenway Park with Red Sox executive vice president Dick O'Connell and members of the press to await the news that they all expected. At exactly 10:01 A.M., Hy Hurwitz, longtime writer for the Boston Globe, and secretary/chairman of the Baseball Writers Association of America, entered and opened a manilla envelope containing the green-and-white teletype sheet that he had just received from the BBWAA, announcing: "Elected to the Hall was Ted Williams with 282 votes. That's a record, 93.3 percent of the votes. No one else was elected." Offered here is the very teletype sheet that Hurwitz unveiled to the media that day listing the complete results of the Hall of Fame balloting for 1966. The first page lists all of the players receiving votes, the number of votes received, and the percentage of the vote received. The second page lists the top thirty candidates and also enumerates the breakdown totals for each category (e.g., total number of ballots received, average number of votes per ballot, etc.). The printing along the base of page two reads "Produced for the BBWAA Chairman/Hy Hurwitz - Boston Globe." Upon receiving the news, Williams was humble in his thanks, simply stating, "This completes everything a ballplayer ever dreams about or hopes to happen to him." Amazingly, we found a number of photographs picturing Ted Williams holding this very sheet at the press conference that day, one of which is pictured here in the catalog. Afterwards, Williams made a gift of the piece, flawlessly inscribing it in black ink (grading "10") on the second page, "To Curt/Always with me/Ted Williams." Given the very personal nature of the inscription, the "Curt" to whom this sheet was addressed was almost certainly sportscaster Curt Gowdy, who was the longtime "voice of the Red Sox" on radio and television. Williams and Gowdy shared a love of both baseball and fishing, and the two became close friends during their long tenure together in Boston. Williams was not popular with the members of the Boston press during his career and he especially did not get along with Hy Hurwitz, who announced his election to the Hall of Fame. The "hate hate" relationship Williams had with sportswriters probably made him much more appreciative of Gowdy's friendship, and is probably reflective of his statement "always with me." This is one of the most unique and significant Ted Williams items we have ever seen. The fact that it was later personally inscribed by Williams to one of his closest friends, on one of the happiest and most important days of his life, only adds to its significance. The teletype sheets (14.75 x 11 inches) display only light handling wear and have been laminated together (back to back) for optimal preservation. LOA from James Spence/JSA. Reserve $500. Estimate (open). SOLD FOR $948