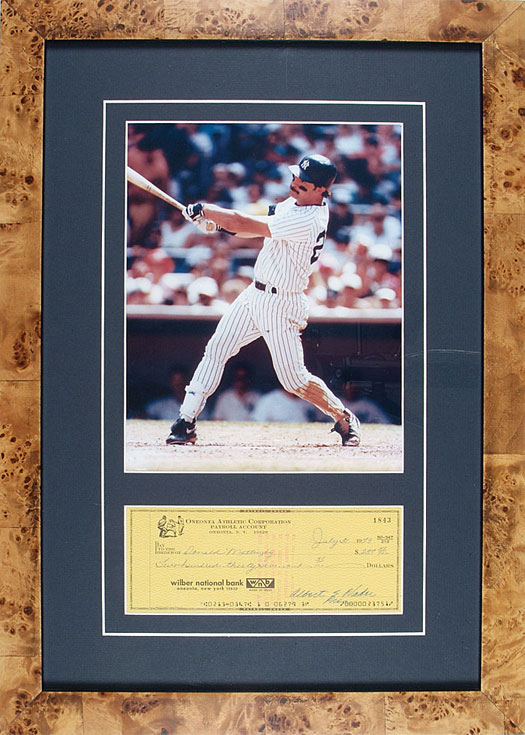 Don Mattingly payroll check (7.75 x 3 inches) dating from his rookie season with Oneonta of the New York-Penn League (NY Yankees minor league club). Mattingly was drafted right out of high school by the Yankees in the nineteenth round of the June 5, 1979, baseball draft. This Oneonta Athletic Corporation payroll account check is dated "July 31, 1979," so while we can't be certain that this is Mattingly's very first check as a professional baseball player, the date of the check suggests that this is very likely. The check has been personally endorsed by "Donald Mattingly" ("10") in red ball-point ink on the reverse. When this check was issued, no one could have imagined the stardom that the future held for the then eighteen-year-old rookie. The check is in the amount of $237.51. Though we don't know the pay period for this compensation, it is probably for one week. We believe that through the course of his extraordinary professional career, this must be one of "Donnie Baseball's" smaller paychecks. Mattingly led Oneonta in hitting that season, finishing the year with a .349 average. He followed that up with season-ending averages of .358, .316, .315, and .340, respectively, over the next four years before joining the Yankees for good in midseason of 1983. The check has a single light vertical fold line. The strong ink signature on the reverse is completely unaffected by the normal bank cancellation marks and stamps. Near Mint condition. The check has been matted and framed together with a color photo of Mattingly to total dimensions of 15 x 21 inches. Ideally, the piece has been framed with glass on each side, so that both the front and reverse of the check can be viewed in their entirety. LOA from James Spence/JSA. Reserve $200. Estimate $400/$800. SOLD FOR $1,304