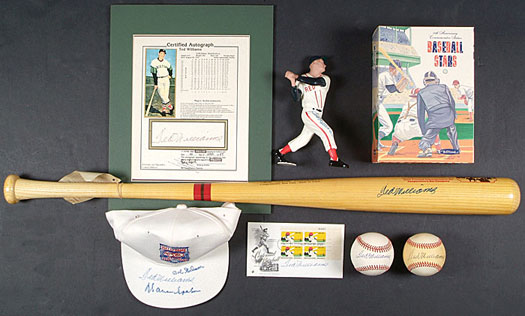 Collection of diverse baseball memorabilia, each signed by Ted Williams. This group originates from an old-time collector, who obtained all but one of the signatures in person at various signing shows in the 1970s and 1980s. 1) The highlight of the group is a 1986 limited edition "Fenway Park" commemorative bat issued by the Cooperstown Bat Company signed by Williams in blue Sharpie (grading "10") on the barrel. The 34-inch bat remains in Mint condition and is accompanied by its original Cooperstown Bat Company COA. The remainder of the collection is comprised of the following: 2) 25th Anniversary Commemorative Hartland Statue of Ted Williams in its original box. The statue has been signed in blue fine-point Sharpie ("10") on the right leg. Mint, in a Near Mint box. 3-4) Two official American League (Brown) balls, each signed in blue ink across the sweet spot. One ball displays a tiny degree of light age toning and is otherwise in Mint condition with the signature grading "10." The other ball displays moderate-to-heavy toning on the sweet spot and two adjacent side panels. In Very Good to Excellent condition with the signature grading "9." 5) 1969 Centennial of Baseball first-day cover signed on the front in blue ink ("10"). Ex-Mt. 6) Ted Williams signed sheet. The sheet, which displays a photo of Williams alongside his career statistics, has been signed along the base in black marker ("6"). The signing of this sheet by Williams was witnessed by a notary public, who has attested to that by fully notarizing it at the base. The sheet (8 x 9.34) has been affixed to a cardboard mount by means of adhesive and matted to total dimensions of 10 x 13 inches; otherwise Near Mint. 7) Baseball Hall of Fame commemorative "50th Anniversary" baseball cap, signed on the brim in blue Sharpie by Williams ("7"), Warren Spahn ("5/6"), and Bob Gibson ("8"). Near Mint. Total: 7 items. LOA from James Spence/JSA. Reserve $500. Estimate $1,000/$2,000. SOLD FOR $1,422