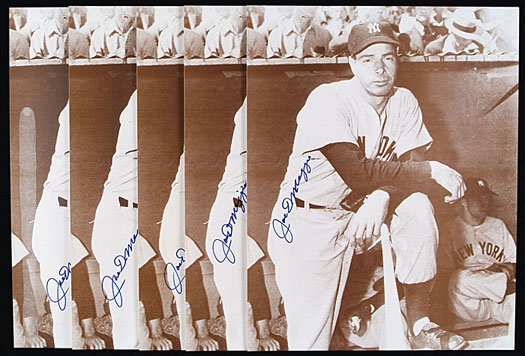 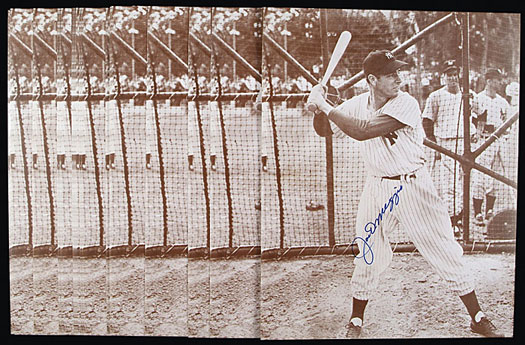 Collection of thirty 11 x 14-inch sepia photos of Joe DiMaggio, each flawlessly signed by DiMaggio on the front in blue Sharpie (grading "10"). Two groups of identical photos are represented here. Five identical photos picture DiMaggio in uniform standing at the top of the dugout, while the second group of twenty-five identical photos pictures him in uniform as he takes his turn in the batting cage. Each photo is in Near Mint condition. DiMaggio signed photos of this size are the exception rather than the rule, and the offered examples are ideal with respect to both signature quality and condition. Their provenance is equally significant. All of these photos were signed by DiMaggio in person for our consignor at a New York City signing show in the early 1990s. As an interesting side note, DiMaggio had placed a limit on how many items he would sign for each person at the show. In order to get all thirty photographs signed (and to circumvent DiMaggio's arbitrary restriction to just several per person) our consignor, who was a school teacher, recruited students to wait in line with him so that he get get all of these pieces signed. They have been carefully stored away ever since. Total: 30 photos. LOA from James Spence/JSA. Reserve $1,500. Estimate $3,000/$5,000. SOLD FOR $8,888