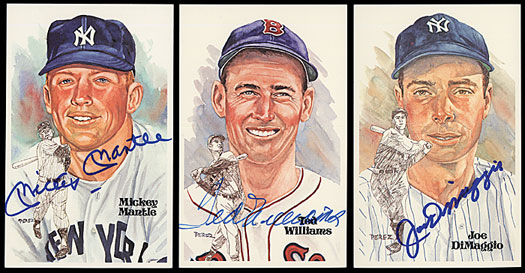 This near-complete set of Perez-Steele Hall of Fame postcards (missing only the thirteenth, fourteenth, and fifteenth series) is comprised of 241 cards (including the checklist cards) and features sixty-two signed examples. Perez-Steele Hall of Fame postcards, which are universally recognized as one of the most classic issues ever produced for autograph collectors, were originally issued in fifteen individual series between 1980 and 2001. With the exception of seven cards (featuring Hall of Fame Officials, Perez-Steele Gallery executives, and other non-ballplayers) only Baseball Hall of Fame members are included in the set. Each card was limited to a print run of 10,000 and every card is individually numbered on the reverse. Of the 275 cards in the set, only 104 could possibly have been signed by Hall of Fame players (the balance of the players passed away prior to the date of publication). The offered collection features fifty-nine signed Hall of Fame player cards, as well as three additional signed cards featuring non Hall of Fame members. All of the cards are from set number "07562" with the exception of the Tom Seaver card (set number "01471"). Organized by series, the following are the fifty-nine Hall of Fame player-signed cards in this collection: Second Series: Gehringer; Third Series: DiMaggio and Feller; Fourth Series: T. William, Musial, and Boudreau; Fifth Series: Berra, Koufax, Leonard, Wynn, Irvin, Spahn, Ford, Mantle, and Herman; Sixth Series: Kiner, Lemon, Roberts, Banks, Lopez, Mathews, Mays, Kaline, Snider, Gibson, and Mize; Seventh Series: Aaron, F. Robinson, Kell, Marichal, and B. Robinson, Eighth Series: Aparicio, Drysdale, Ferrell, Killebrew, Reese, Brock, Slaughter, and Wilhelm; Ninth Series: Doerr, McCovey, Dandridge, Hunter, B. Williams; Tenth Series: Stargell, Barlick, Bench, Schoendienst, and Yastrzemski; Eleventh Series: Morgan, Palmer, Carew, Jenkins, and Perry; Twelfth Series: Fingers, Newhouser, R. Jackson, Carlton, and Rizzuto. In addition to the fifty-six signed Hall of Fame player cards, Card "D" from the Sixth Series has been signed by Ed Stack, Card "E" from the Ninth Series has been signed by Frank Steele, Peggy Steele, and 120, and Card "F" from the Tenth Series has been signed by Ed Stack. The Roy Campanella card bears a stamped signature. All of the cards have been signed on the front in either blue or black Sharpie, and the signatures grade "9/10" overall. The cards are in overall Nr-Mt condition. As a point of reference, the 2011 Standard Catalog of Baseball Cards lists the value of the fifty-nine Hall of Famer signed cards in this set at $2,992. LOA from James Spence/JSA. Total: 241 cards (62 signed). Reserve $500. Estimate $1,000/$2,000. SOLD FOR $1,778