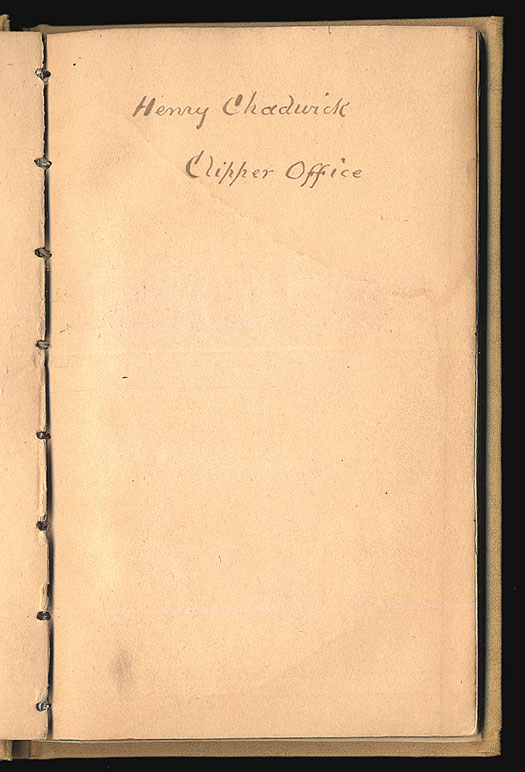 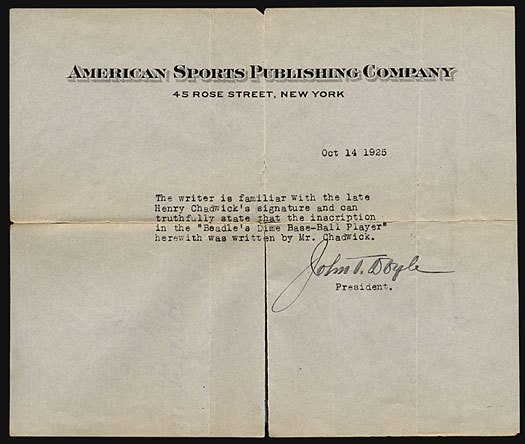 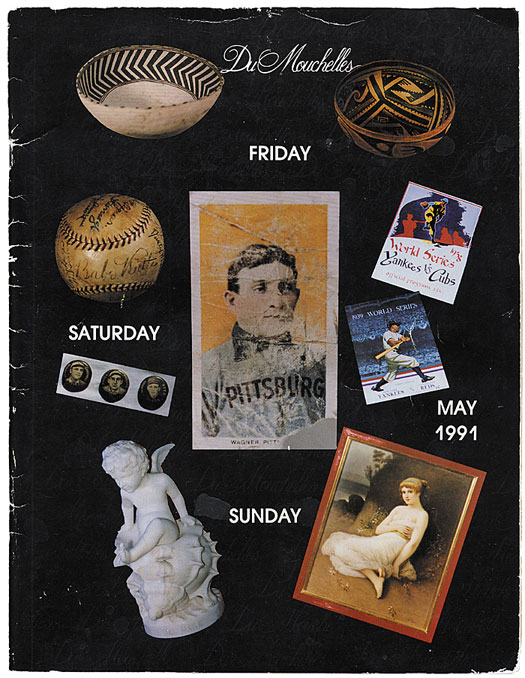 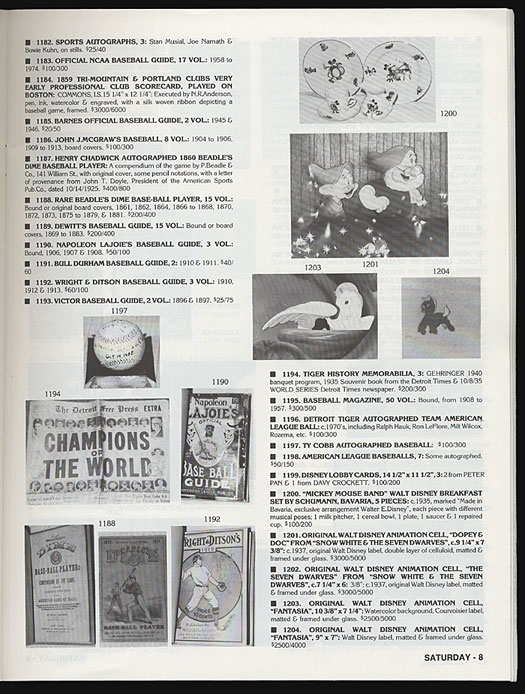 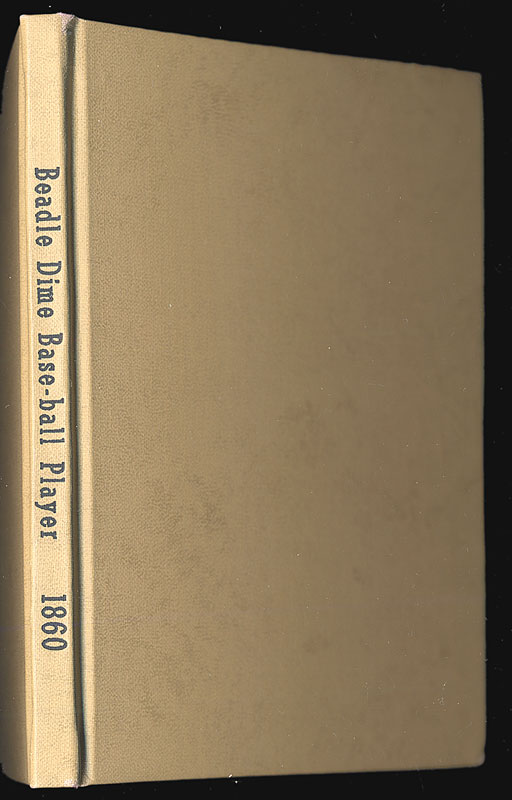 Presented is one of the most historically significant signed items of any kind we have ever offered relating to the earliest days of the game of baseball: Beadle Guide author Henry Chadwick's personal copy of the 1860 Beadle's Dime Base-Ball Player , used by Chadwick in his earliest days as a sportswriter with the New York Clipper , signed by Chadwick. This is far more significant than just an early baseball book signed by Chadwick. The 1860 Beadle's Dime Base-Ball Player was the very first baseball guide ever published for commercial sale to the public. It was of monumental importance to promoting the popularity of organized baseball in the earliest days of the game. Published annually between the years 1860 and 1881, this guide presented all important information relating to the game of baseball, including rules and regulations (and changes to them), proceedings of the annual baseball conventions, a history of the game, team rosters and representatives, accounts of the previous season for the most prominent teams, and statistics (averages, scores of important games, etc.). Aside from being signed by Chadwick, and aside from being his personal copy, this is the first example of the inaugural 1860 edition we have ever offered and it is one of only a very few copies in existence. The fact that this was Chadwick's personal copy makes it one of the most important early baseball books and one of the most important signed Chadwick items that could possibly exist.

This book has a tremendously fascinating provenance and is accompanied by a letter of authenticity for the signature dating from 1925! This Chadwick signed guide - the very first baseball guide - was purchased at the famous DuMouchelle's baseball auction. In May 1991, DuMouchelle's Auction House of Detroit, Michigan, presented an astounding collection of early baseball memorabilia that is talked about by advanced collectors to this day. It was not stated where the collection came from, but the sale included an extraordinary selection of books and memorabilia that obviously originated from someone involved in the game, possibly as a sportswriter. It is interesting to note that among the treasures presented were the 1859 Tri-Mountain and Portland calligraphic scorecard (which sold for $26,000) and a copy of John Ward's How to Play Baseball, personally signed by John Ward to Henry Chadwick.

Chadwick's 1860 Beadle's Guide appeared in the May 1991 DuMouchelle's auction as Lot 1187. Its very brief catalog description read "Henry Chadwick's Autographed 1860 Beadle's Dime Baseball Player: A compendium of the game by P. Beadle & Co., 141 William St., with original cover, some pencil notations, with a letter of provenance from John T. Doyle, President of the American Sports Pub. Co., 10/14/1925." Despite a pre auction estimate of $400/$800, the book's significance was clearly recognized by the many sophisticated baseball collectors in attendance that day, for it realized a final sale price of $7,000.

Chadwick's black-ink ("grading "9/10") inscription reads "Henry Chadwick/Clipper Office." The Clipper is the paper Chadwick is most associated with, and where he began his career as a baseball reporter in the late 1850s. The letter of authenticity for Chadwick's signature by John T. Doyle, president of the American Sports Publishing Company, is dated October 14, 1925, and is typed on American Sports Publishing Company letterhead. In his letter, Doyle affirms "The writer is familiar with the late Henry Chadwick's signature and can truthfully state that the inscription in the 'Beadle's Dime Base-Ball Player' herewith was written by Mr. Chadwick." It is signed "John T. Doyle" in black fountain pen. John T. Doyle, in addition to being president of the American Sports Publishing Company, was also vice-president of A. G. Spalding & Co., a position he held from 1892 through 1942, the year of his death. (A.G. Spalding founded the American Sports Publishing Company and used it to publish his annual Spalding Guide .) Since Chadwick edited the Spalding Guide for many years, Doyle and he obviously enjoyed a close working relationship, making Doyle eminently qualified to render the opinion he offers here. We cannot imagine that anyone would have been more familiar with Chadwick's signature than John T. Doyle was at the time of his letter, and it is our extraordinary good fortune today that an early owner of this guide took the time and trouble to contact Doyle. The rarity and historical significance of this guide cannot be overstated.

The guide retains its original plain brown covers and has long ago (perhaps even a century ago) been professionally encased in tan cloth boards (protecting the original covers and book as intended). "Beadle Dime Base-ball Player 1860" is stamped in black along the spine. The original covers are heavily worn and there is a water stain, located in the upper and lower right quadrants of the guide, as well as along the right edge, that affects both covers and each individual page. Aside from the stain, the pages remain bright and clean and the integrity of the book has not been compromised. Good to Very Good condition overall. The one-page letter (8.5 x 7 inches) from Doyle displays a horizontal and two vertical folds. There is a split along the base of the vertical fold that has been repaired with clear tape on the reverse. In Very Good condition. Accompanied by an original copy of the 1991 DuMouchelle's auction catalog. LOA from James Spence/JSA. Reserve $5,000. Estimate (open). SOLD FOR $10,073