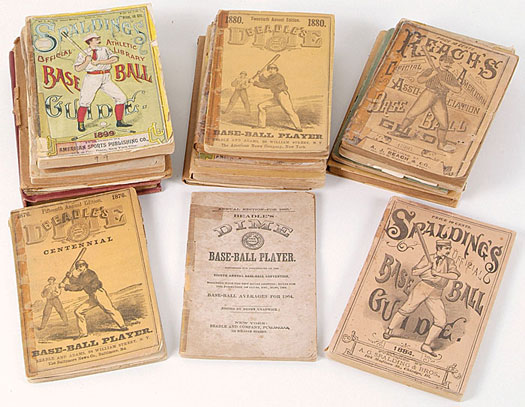 The game of baseball was a true "work in progress" during the nineteenth century. For many players the only way to keep track of the yearly rule changes, in addition to keeping track of the developments of organized baseball of the past season, was to consult the annual reference guides, which, as the seasons went on, were issued by a number of respected publishers. Offered here is a diverse collection of eighteen early guides issued between the years 1865 and 1899, some of which have been edited by Henry Chadwick, the "Father of Baseball." All of the guides in this collection have tape repair/reinforcement along the spine (with the exception of one), as well as various other condition flaws common to publications from this era, including tears to the covers, toning, foxing, and separation of some pages from the spine. Five of the guides are bound (by means of tape) in homemade cardboard covers, while another has been professionally bound in leather boards. A few also bear bookseller stamps on the interior. While the general overall condition of the guides ranges from Poor to Good, averaging Fair, it should be noted that a grade of Fair is easily earned (due to cover, tears, etc.), and that the integrity of these guides remains very much intact despite their modest technical grades, which so often "come with the territory" with early guides. 1) Our Boys Baseball Rules for 1878 . 2-5) Beadle's Dime Base-Ball Player (4): 1865 (missing original front cover), 1875 (bound in homemade cardboard covers), 1876 (the bottom third of page 69 has been cut out), and 1880. 6) Reach's Official American Association Base Ball Guide for 1886 . 7) Reach's Official Base Ball Guide for 1895 (bound in homemade cardboard covers). 8-9) DeWitt's Base Ball Guide (2): 1879 (missing both covers; bound in homemade cardboard covers) and 1883 (bound in homemade cardboard covers). 10-18) Spalding's Base Ball Guide (9): 1884, 1885 (missing both covers; professionally bound in red leather boards), 1886 (missing half its back cover; bound in homemade cardboard covers), 1887, 1888 (missing back cover and possibly a few advertising pages at the end), 1893 (missing both covers), 1894, 1895, and 1899. Total: 18 guides. Reserve $1,000. Estimate (open) . SOLD FOR $2,370