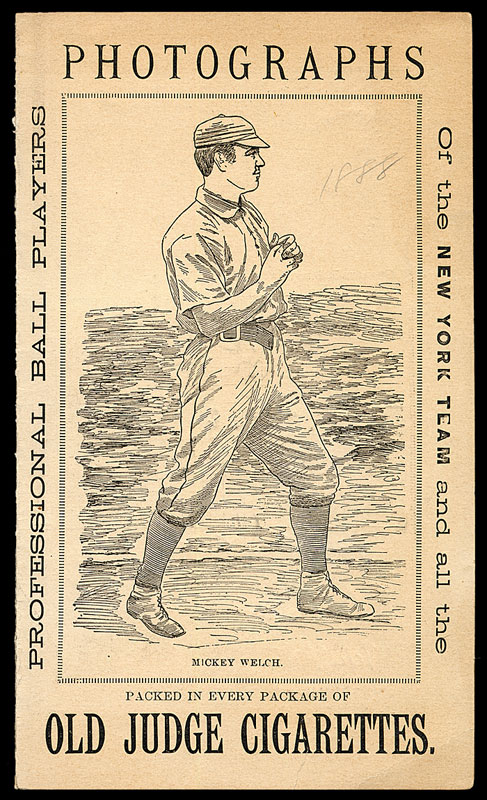 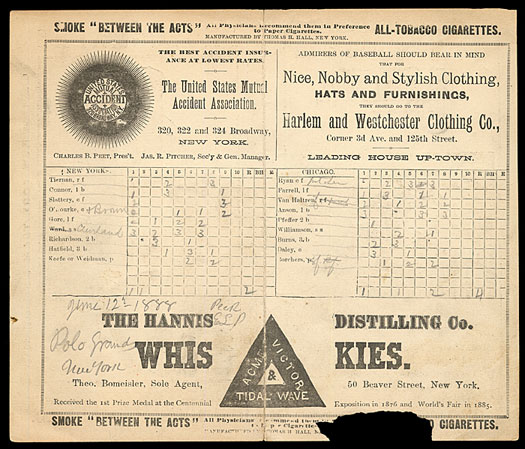 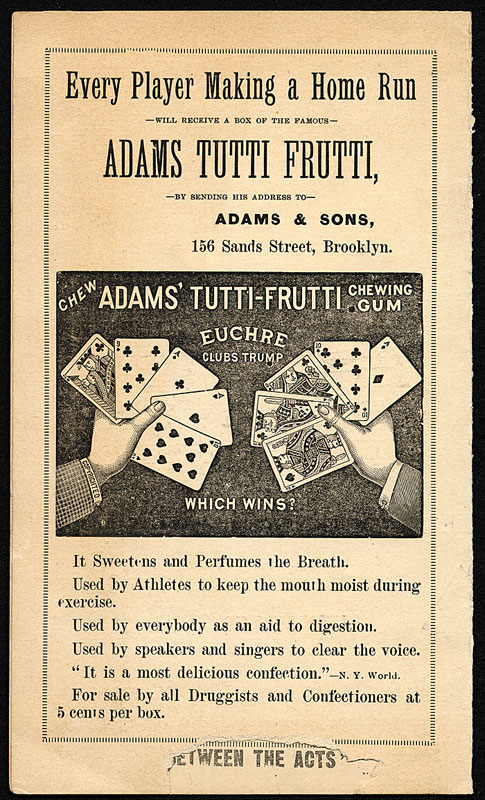 Old Judge advertising-style scorecard from an 1888 National League game between the New York Giants and Chicago White Stockings held at the Polo Grounds. This is a spectacular scorecard on many counts. The cover features a woodcut illustration of Hall of Fame pitcher Mickey Welch surrounded by advertising for the N172 Old Judge baseball card set, which boldly reads: â€œPhotographs of the New York Team and all the Professional Ball Players Packed in Every Package of Old Judge Cigarettes.â€ Welch is identified in print directly below his image. The cover of the program, which itself is very much like a card, is an extraordinary advertising vehicle for Old Judge Cigarettes and the cards issued by Old Judge. These substantial scorecards are extremely rare. There was obviously a set of these issued, as we have seen several different players featured on the covers. The preprinted lineups include Conner, O'Rourke, Ward, Gore, and Keefe for New York, and Anson, Ryan, Van Haltren, Pfeffer, and Farrell for Chicago. Neatly scored in pencil to record a 4-2 Chicago victory. An interior pencil notation reads "June 12 1888/Polo Grounds/New York." Research confirms that the White Stockings defeated the Giants 4-2 at the Polo Grounds on July 12, 1888. The Giants were champions of the National League in 1888. They then defeated the American Association champion St. Louis Browns in the World Series that fall. The scorecard (4.25 x 7.25 inches; folded) displays a 2 x .5-inch area of paper loss along the base of the back cover as well as partial separation at the both ends of the spine. The year "1888" is lightly written in pencil on the cover. While technically in modest grade due to the noted flaws, when the cover is folded it displays as Excellent. It is interesting to note that virtually all programs of this style that we have seen originated from a single old-time collection that was assembled in the early 1900s. The collection was comprised of approximately 100 programs (only five or six of this style) and virtually all had back damage of varying degrees from at one time being stored in a scrapbook. This is a great program which would be a significant addition to any substantial nineteenth-century memorabilia or baseball-card collection. From the Joe Pelaez Collection. Reserve $200. Estimate $400/$800. SOLD FOR $711