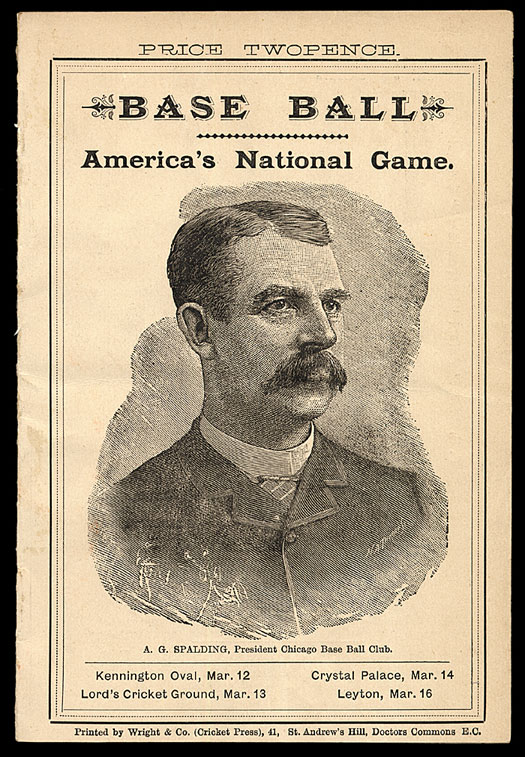 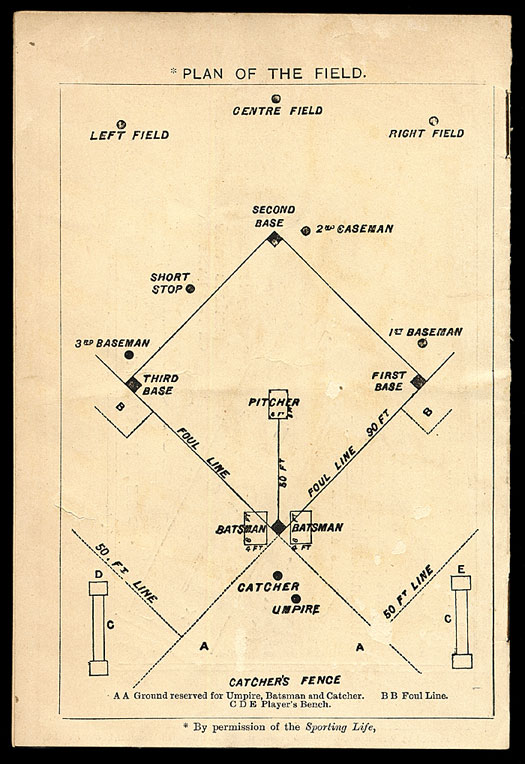 Exceedingly rare program from Albert Spalding's celebrated 1888-1889 World Tour issued for the series of games in London, England. This is the first and only program from the 1888-1889 World Tour that we have ever seen. This is one of the rarest, most extraordinary and important of all World Tour items and all nineteenth-century baseball programs. Our consignor discovered this program many years ago among the possessions of an American diplomat who was visiting London in March 1889, and who then later brought it back home to the United States. The cover displays a large woodcut illustration of Albert Goodwill Spalding, owner of the Chicago White Stockings and the driving force behind the tour. Above his image is the printed title "Base Ball/America's National Game." Listed along the base are the locations and dates for the games in London: "Kennington Oval, Mar. 12; Lord's Cricket Ground, Mar. 13; Crystal Palace, Mar. 14; Leyton, Mar. 16." The price of the program, "Two pence," is printed at the top. What is interesting about the program is that there is no scorecard section among the four interior pages. Because the very game of baseball was new to the citizens of London, a scorecard was unnecessary. Instead, the pages are devoted strictly to text explaining both the theory and rules of baseball. A diagram of the baseball field, including distances and the names and locations for each position, is featured on the back cover. A full-page advertisement for English sporting-goods dealer "F. H. Ayers," which is located on the interior front cover, prominently notes that the store carries "A. G. Spalding & Bros.' Base Ball Implements." The trip to London represented the final stop in Spalding's trip around the world, which witnessed the Chicago White Stockings and the "All Americans" (a group of all-star major league players) travel approximately 30,000 miles and play games in thirteen different countries. Spalding came up with the idea for a world tour and was instrumental in both its planning and realization. His goal was both simple and lofty: to promote the game of baseball throughout the civilized world. The tour began with a heavily promoted trip across the country before departing San Francisco for Australia. Between Australia and London, the tour made stops in Cairo, Egypt, where they played in the shadows of the Great Pyramid; Rome, for a game on the grounds of the Villa Borghesa; and Paris, where they played next to the Eiffel Tower, which was not yet even completed. Following a week in London, the tourists set sail for New York, where they were received with great fanfare for completing what is still considered to be the greatest baseball tour ever made. The international nature of the 1888-1889 World Tour has resulted in very few surviving souvenirs, especially one as significant as a program. Unfortunately, very little information regarding the planning and day-to-day operations of the tour are known, including whether or not Spalding elected to print programs for each country visited. Perhaps local printing costs and the need for numerous translations made it impractical? Maybe he only printed programs for stops in major cities? It seems that those questions will forever remain unanswered. What we do know, however, is that if he did print programs for other stops along the way, they have yet to surface. This is the first and only 1888-1889 World Tour program, from any country, we have ever seen, and the only example to the best of our knowledge to ever be offered publicly or even illustrated in a book or catalog. It is a remarkable find. The soft-cover program (5 x 7.25 inches) displays light handling wear, including a few light creases. The back cover shows a few small areas of surface paper loss and a tiny tear. In Excellent condition overall. Reserve $1,000. Estimate (open). SOLD FOR $3,555