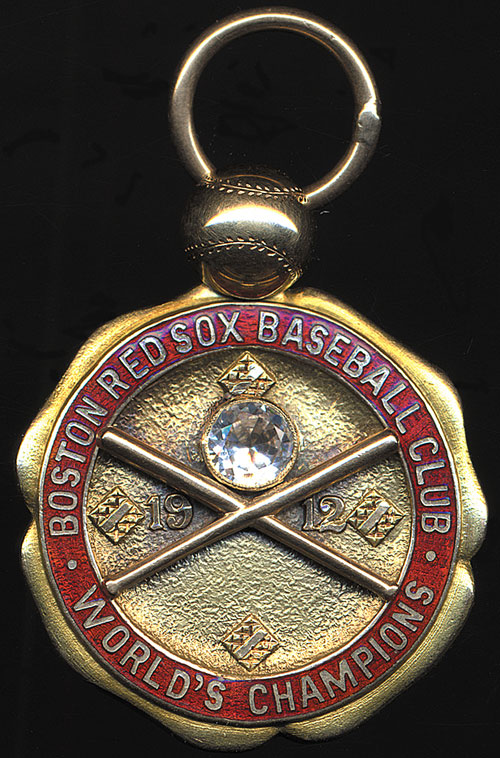 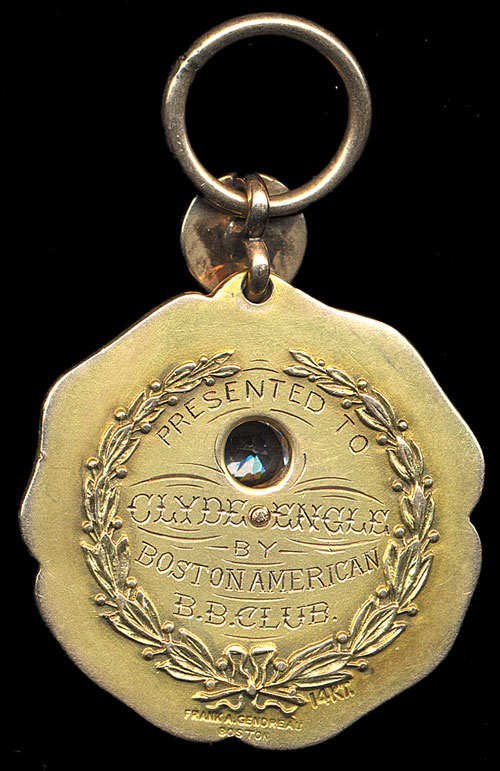 Extremely rare and significant World Series fob issued to utility infielder Clyde "Hack" Engle of the Boston Red Sox in commemoration of the club's 1912 World Championship season. Every member of the team received a World's Championship fob from the Red Sox with his name beautifully engraved on the reverse. This is literally the equivalent of a World Series ring for Boston Red Sox players in 1912. The 14K gold medal, with scalloped edges and red enamel trim, features two figural crossed bats set upon a baseball diamond motif that includes the year, "1912." A single one-carat diamond bezel is set in the center. (Please note: the original real diamond has long ago been removed; it has been replaced with a CZ diamond). "Boston Red Sox Baseball Club - World's Champions" is lettered in gold within the red enamel border. A small figural baseball is attached to the medal at the top, which in turn is attached to a small ring to allow for its attachment to a watch fob. The engraving on the reverse reads: "Presented to Clyde Engle/by/Boston American/B.B. Club." Below that is the engraved name of the jeweler "Frank A. Gendreau" and the designation "14KT."

This is a particularly rare World Series award and one of only a few known examples. We have seen only two other examples of this jewelry award over the years, including Joe Wood's 1912 Championship fob that was sold by the Wood family many years ago. Interestingly, the jewelry company (Joyce & Gendreau) that made this medal is still in business today, and one can see a picture of a different example (only the front is shown; we believe it is the Joe Wood example), along with a brief history of the 1912 Red Sox World's Championship award, on its website (http://www.joycejlrs.com/html/our_history.htm). According to the website, Frank A. Gendreau, who was a watchmaker by trade, was a big sports fan (most likely a member of the Royal Rooters) and it was because of his close association with many of the Red Sox players that he was commissioned to create this beautiful medal. Clyde Engle played a pivotal role in the 1912 fall classic, which is regarded as one of the greatest World Series ever played. With the Red Sox trailing 2-1 in the bottom of the tenth inning of the eighth and deciding game (one game ended in a tie), it was Engle, pinch hitting for pitcher Smokey Joe Wood, that led off for the Red Sox against Giants hurler Christy Mathewson. Engle lofted an easy fly ball to center field that was inexplicably dropped by the usually sure-handed Fred Snodgrass. As a result of that error, known forever more as Snodgrass' "$12,000 Muff," Boston proceeded to score two runs to win both the game and the Championship. This is one of probably fewer than five 1912 World Series medals known, one of which resides in the Massachusetts Historical Society. While the full history of the award's journey from Engle to our consignor's family is unknown, it has been in his family's possession for decades, passing from his aunt, to his mother, and now to him (or as he said, from safe deposit box to safe deposit box to safe deposit box). The fact that the medal (1.25 inches in diameter) has virtually not seen the light of day for decades no doubt has contributed to its survival in spectacular Near Mint condition today. This is an extremely attractive and rare World Series presentation piece commemorating the first of Boston's four World Championships during the decade. Reserve $2,500. Estimate (open). SOLD FOR $38,513