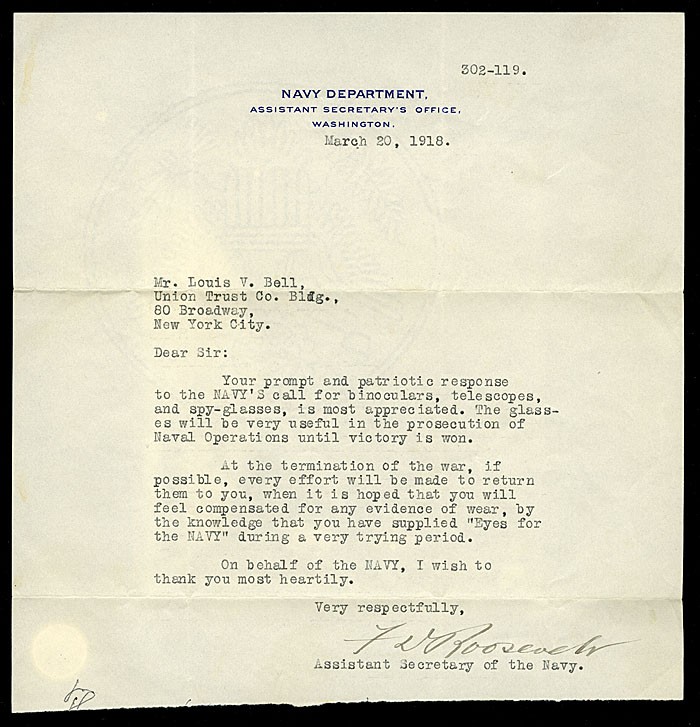 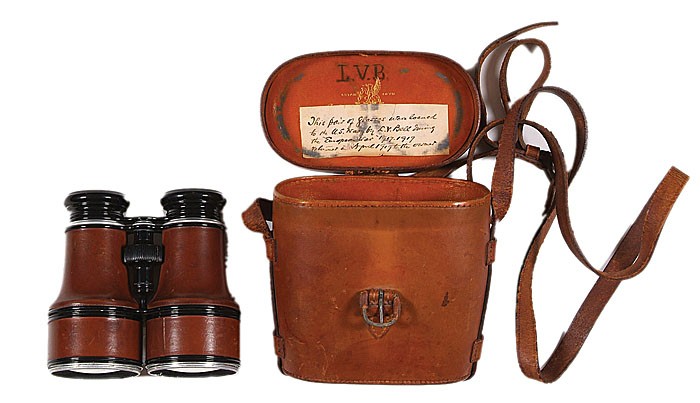 In times of war the U.S. citizenry is known for its dedication to the cause and willingness to make any necessary sacrifice. During the First World War that support often took the form of equipment donated to the military, as exemplified here. Offered are binoculars and case, volunteered to the U.S. Navy in WWI, along with a letter of thanks signed by then Assistant Secretary of the Navy Franklin Delano Roosevelt. The typed letter, dated "March 20, 1918," on Navy Department letterhead (8 x 8 inches), and addressed to "Mr. Louis V. Bell; Union Trust Co. Bldg.; 80 Broadway; New York City," reads:

Dear Sir: Your prompt and patriotic response to the NAVY'S call for binoculars is most appreciated. The glasses will be very useful in the prosecution of Naval Operations until victory is won. At the termination of the war, if possible, every effort will be made to return them to you when it is hoped that you will feel compensated for any evidence of wear, by the knowledge that you have supplied 'Eyes for the NAVY!' during a very trying period. On behalf of the NAVY, I wish to thank you most heartily. Very respectfully, Franklin D Roosevelt, Assistant Secretary of the Navy.

Roosevelt's black fountain-pen signature grades "9/10." The letter exhibits two horizontal mailing creases, and has been irregularly torn along the base. Without reference to the torn, missing section of the letter, it remains in Excellent condition. Also included is a typed letter (8 x 10.5 inches; Vg) of receipt (with its original mailing envelope, postmarked May 12, 1918) for the binoculars, which states that Mr. Bell is to receive a check of $1.00 for the glasses, which, if they are returned to him after the war, will constitute a rental fee. Lastly, accompanying the signed letter and receipt are the actual binoculars which had been loaned, and which indeed had been returned, still in their original hard leather case with strap. A vintage, small, handwritten note affixed to the interior lid reads "This pair of glasses were loaned to the U.S. Navy by L. V. Bell during the 'European War' 1917-1919 returned in April 1919 to the owner." The binoculars (which remain in perfect working order) and case both display wear commensurate with their age and former use and are in Very Good condition overall. Franklin Roosevelt resigned his seat in the New York State Senate to become President Wilson's Assistant Secretary of the Navy (1913-1920), serving throughout World War I. This is a fascinating lot which tells a story of support for U.S. troops by an American citizen during World War I, and the appreciation of this support as expressed by future president FDR in his official capacity as Assistant Secretary of the Navy. Total 4 items (FDR letter, receipt, envelope, and binoculars with case). LOA from James Spence/JSA. Reserve $300. Estimate $500+. SOLD FOR $1,541