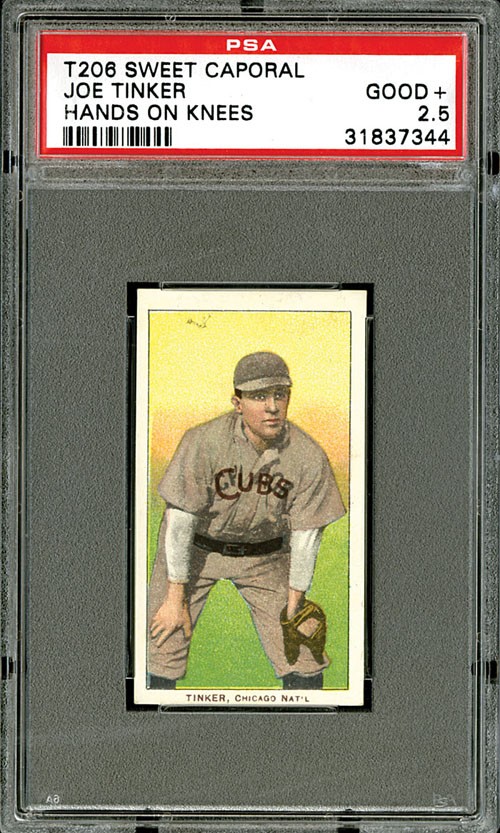 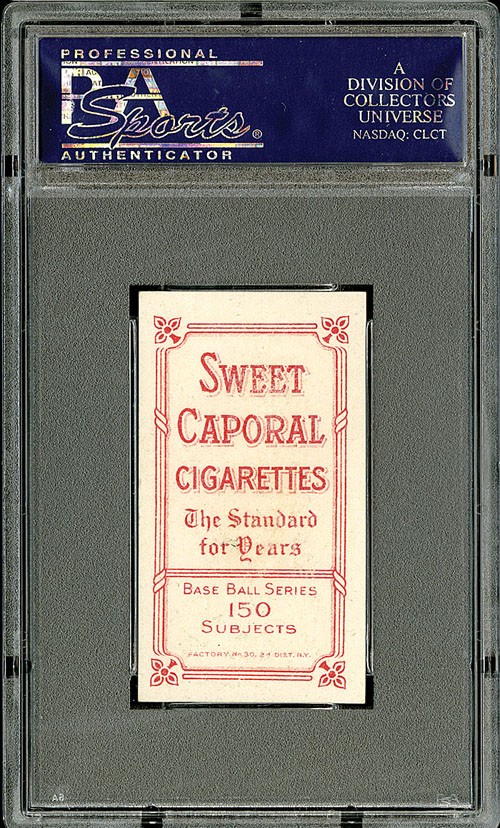 We're not really sure whether to call this a printing error or a variation. But we are sure it is a fascinating card and one with great significance to unlocking the mysteries of the T206 set and how it was produced. This printing error has two team names on Tinker's jersey; the team name "Cubs" is printed across the jersey, but if you look closely, it is easy to see that the team name "Chicago" was printed first and then gone over with the more prominent "Cubs" team identification. This unusual printing has all the more significance when one considers that a proof version of the T206 (front view) card of Frank Schulte exists with CHICAGO across the jersey, rather than the CUBS that is seen on the issued version. This extremely unusual T206 printing anomaly card of Joe Tinker (hands on knees pose) is very rare. Surprisingly, it is not unique. We are aware of only two others in existence. The first example we became aware of (and the first time we'd heard of this card) was documented on former Standard Catalog and SCD editor and Hobby Hall of Famer Bob Lemke's blog. Here is the link to the article in which that first example was documented and discussed: http://boblemke.blogspot.com/2011/04/t206-tinker-variation-or-post-printing.html. The second example was presented to us in 2012 for auction when it was discovered by our consignor in a large T206 collection (when he sent the collection in for grading it was recognized as a significant variation by SGC). The offered card is now the third documented example that we are aware of and an entirely newly discovered, fresh-to-the-hobby example. The card was miraculously found by REA in a small group of original-owner T206s consigned to this auction by a non-collecting family (the balance of the cards appear in a separate lot). Housed in a scrapbook for one hundred years, the card has been perfectly preserved and presents as Ex-Mt despite a harsh technical grade of GOOD+ 2.5 by PSA due to adhesive residue on the reverse from the scrapbook. The front features brilliant, bold colors, bright white borders, four sharp corners, and is centered to the bottom. The Sweet Caporal reverse is boldly printed with the previously mentioned scrapbook adhesive the only notable flaw. The fact that there are now three confirmed examples suggests there may be others, but this important T206 card appears without question to be extremely rare. As collectors have become more sophisticated, there has been a growing appreciation for all great rarities and unusual cards associated with the landmark T206 set. This is a fascinating, and very striking, virtually unknown printing error from the T206 set. Because of its extreme rarity, there is no consensus on the value of this card and (like the rare T206 Doyle years ago!) there is very little price history. We are confident the auction process will provide clarity. The SGC 20 example that appeared as Lot 217 in REA's May 2012 auction sold for $18,960. Reserve $2,000. Estimate (open). SOLD FOR $11,850