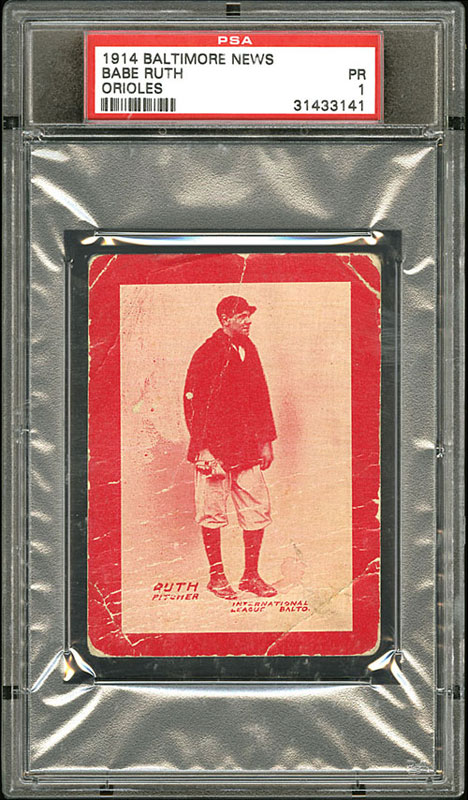 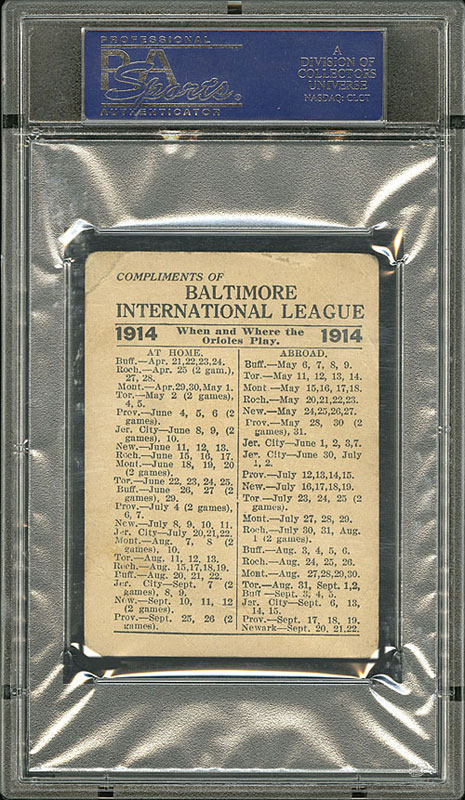 Graded PR-FR 1 by PSA. Presented is one of only ten known examples of the card many consider to be the single most important and miraculous baseball card in the world: the 1914 Babe Ruth rookie card, featuring Ruth as an unknown minor-league rookie straight out of St. Mary's Industrial School for Boys. The Babe Ruth rookie card is part of a 1914 set issued in Baltimore featuring stars of the city's two professional baseball teams, the Terrapins of the Federal League and the Orioles of the International League. Cards were issued in red-and-white and blue-and-white. This Babe Ruth Baltimore News example is the red-and-white variety.

Exactly ten 1914 Babe Ruth rookie cards in total are known to exist. Of these, three are entrenched in one major private collection (one red, one blue, and one back variation) and two in another (one red and one blue). One example is in the Babe Ruth Museum in Baltimore, and three highlight extremely advanced multimillion dollar collections. It is unlikely that any of these examples will be available in the foreseeable future (if ever). Unless a new example is discovered, the 1914 Babe Ruth rookie card presented here may be the last example to see the auction block for many years.

The card, which pictures Ruth as a member of the American Associationâ€™s Baltimore Orioles, is graded PSA PR-FR 1. It last sold at auction for $152,750 in 2009. The 1914 Babe Ruth rookie card is rivaled in value only by the famous T206 Honus Wagner. This is the first time REA has had an example to offer at auction since 2009. (In September 2012, REA sold a PSA 2 example for $575,000 in a private transaction. That very card had previously sold at auction REA in 2007, at that time realizing $199,500.) The 1914 Baltimore News Babe Ruth rookie predates his next card, which features him as a Major Leaguer with the Boston Red Sox, by a full two years. While the 1916 Babe Ruth card has exploded in value over the past several years, as can be seen by numerous auction results, the far rarer 1914 Babe Ruth rookie has simply not been offered at auction for years.

Value: This offered example first entered the collecting world in 2006. Before this card was consigned to REA's May 2006 auction, it had been passed down for three generations in the Baltimore-area family of its original owner. It appeared as Lot #1 in REA's May 2006 sale, selling for $150,800. It was then consigned directly from the buyer at that sale to REA's May 2009 sale where it appeared as Lot #3, realizing $152,750. Since 2006, two Baltimore News Ruths have been discovered and each has been sold by REA: In 2007 an example in Good condition sold for $199,750; in 2008 an example in Very Good condition sold for $517,000. Both were record prices for any card ever sold at auction (including the T206 Wagner) in the given grade at that time.The reserve on the offered card is set at a modest percentage of its previous sale, and an even more modest percentage of its current value. The selling price will be determined by the market (as is always the case at REA).

Rarity: REA has had the privilege of being involved in the sale or auction of five of the ten known 1914 Babe Ruth rookie card examples over the years. When we first auctioned an example in 2005, we could only account for eight examples at the time. The sale of that card put the 1914 Ruth rookie - a dream card that many were not even aware existed - at or near the top of the short list of most valuable baseball cards in the world. It was easy to see why. The combination of rarity and significance of the 1914 Babe Ruth Baltimore News rookie card is hard not to appreciate. In the years since, in the wake of all the publicity the Ruth rookie has received, a total of three additional examples (including the offered card) have surfaced, all from original-owner non-collecting families. At one time we had thought this brought the total known population to eleven; however, one card which at one time existed apparently no longer exists. When we contacted the owner to see if he still had his 1914 Baltimore News Ruth rookie, we got a much unexpected response: no, because he lost it. He had kept it in his office at work, and to this day he does not know if it was stolen or thrown out. It has been missing for many years, and every once in a while he still finds himself looking for it. He even asked us to keep an eye out for it if we should happen to see it. We know what the card looks like, so if it does cross our desk we'll be able to identify it. But it doesn't sound like this card is likely to ever show up. It was probably thrown out by accident. So, the total population of known 1914 Baltimore News Ruth rookie cards has, incredibly, actually decreased by one, and stands at exactly ten.

Condition: This is a very pleasing low-grade example. The card has numerous creases, primarily in the lower portion of the card, and corner wear, but is still a very striking card with tremendous eye-appeal. The technically low grade will keep the price down, of course, but also makes the card an even more significant collecting opportunity, since many collectors appreciate the hobby's most important cards in all grades. In fact, in recent years it has become routine for T206 Wagners graded PSA 1 to sell for a minimum of $250,000. Approximately sixty T206 Honus Wagners are known to exist compared with only ten 1914 Babe Ruth rookie cards.

Robert Edward Auctions' President Robert Lifson has long picked the 1914 Baltimore News of Ruth as the greatest baseball card of all time, and has for many years expressed the opinion that the 1914 Ruth may someday exceed the value of the T206 Wagner to become the most valuable card in the world. That trend has been in motion for years, even as both cards have escalated in value over the years. The first 1914 Baltimore Ruth to ever appear at auction (the card was previously unknown) sold in the late 1980s for $6,600 to legendary collector Jim Copeland. That card was sold with the rest of his collection at the famous Copeland auction in 1991, where it realized $18,700. Barry Halper's example sold at the famous Barry Halper auction in 1999 for $79,500. The 1914 Baltimore News Ruth offered in Robert Edward Auctions' 2005 sale realized $243,000, which more than tripled that record; and the example sold by REA in 2008 at $517,000 more than doubled that record. The $575,000 private sale brokered in 2012 for the PSA GOOD 2 example nearly tripled the record sale price for a card in that grade. Because of its far greater rarity, the 1914 Babe Ruth rookie is a card that hits the market far less frequently than the T206 Wagner. Very few cards transcend the world of card collecting and whose great significance can so easily be appreciated by collectors and non-collectors alike. The 1914 Baltimore News Babe Ruth card is one of the few, and its great significance and rarity defines it as one of the collecting world's greatest treasures. Reserve $100,000. Estimate $200,000+. SOLD FOR $450,300.00