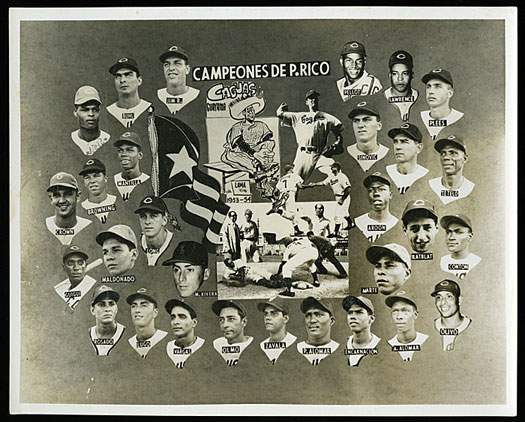 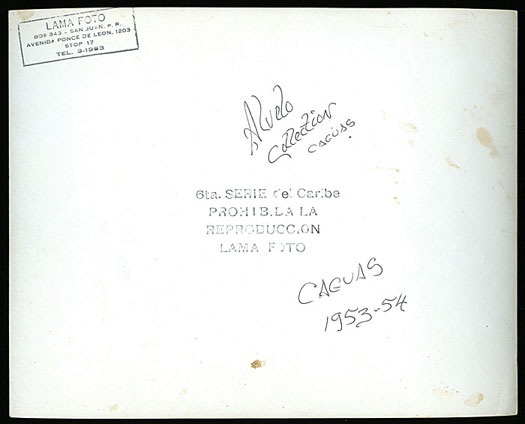 This rare Caguas-Guayama team composite photo, produced in the spring of 1954, features portrait images of twenty-nine team members, including Hank Aaron. Caguas-Guayama were the champions of the 1953-1954 Puerto Rican Winter League and that fact is noted (in Spanish) on the photo: "Campeones De P. Rico." All of the players are identified in print (last name) below their respective images (Aaron is misspelled "Aroon") with the exception of team manager Mickey Owen. A few small action photos are featured in the center. Two "Lama Foto" credit stamps appear on the reverse, as do the vintage handwritten notations "Caguas 1953-54" and "Alvelo Collection Caguas." This photo dates from an era when integration was still in its infancy. At the time no one had any idea that Hank Aaron, who was then just twenty-years old, was at the beginning of one of the most extraordinary careers in the history of American sport. Actually, Aaron's 1953-1954 season of winter ball in Puerto Rico marked a major turning point in his career. Aaron had been an infielder his entire career, but during the 1953/1954 winter season he made the transition to outfield. Through Mickey Owenâ€™s tutelage, he also learned how to hit to all fields. The skills he acquired that winter served him well the following spring. Aaron had expected to spend the season with either the Braves AAA club in Toledo or their AA affiliate in Atlanta. Those plans changed drastically when outfielder Bobby Thomson (of the â€œShot Heard Round the Worldâ€ fame) broke his leg in spring training. Aaron was called up to the Braves to replace him, where he earned a permanent place on the Braves' roster. The rest is history. This is one of the earliest Hank Aaron items we have seen and the first example we have ever offered. Like many important Negro League and integration-related items in the hobby today, this elaborately produced photo was once part of the famous Richard Merkin Collection. The design and extraordinarily high production quality of this piece suggest that it may have been issued as some type of premium. The glossy photo (10 x 8 inches) displays a few minor surface wrinkles that are only visible when viewed at certain angles and is in Excellent to Mint condition overall. Together with a matching "Kodak TMX 6052" negative (2.75 x 2.5 inches) also from the "Lama Foto" archives. Reserve $200. Estimate $400/$800+.
SOLD FOR $711.00