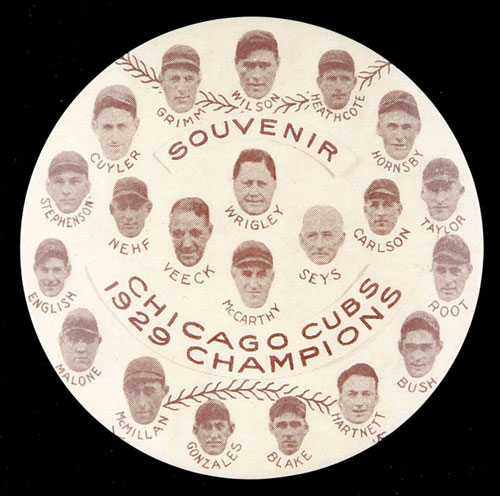 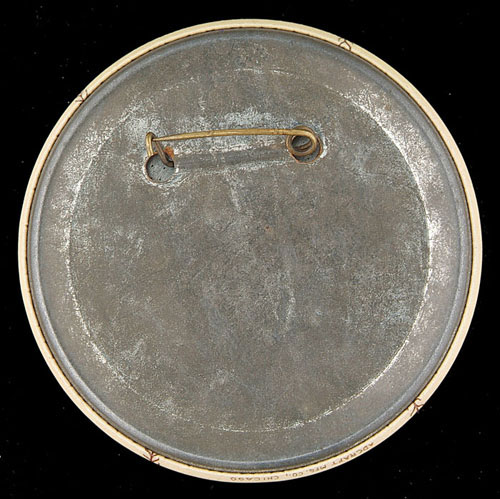 Presented here is what is widely considered the premier baseball team pinback of its era: the extremely rare team composite pin featuring individual portraits of each member of the National League Champion 1929 Chicago Cubs, including Hall of Famers Rogers Hornsby, Hack Wilson, Kiki Cuyler, Gabby Hartnett, and Joe McCarthy. This is not only one of the rarest and most impressive of all baseball pins, it is also one of the best small display items of any kind ever produced featuring this legendary team. The 1929 Chicago Cubs team composite pin has always been recognized as one of the great classics among serious pin collectors. Exceptionally large (measuring 3 inches in diameter) and designed as a baseball, it reads "Souvenir" and "Chicago Cubs - 1929 Champions" in brown lettering, surrounded by twenty-one identified sepia player-portraits (including executives Bill Veeck and team-owner William Wrigley, of chewing-gum fame). A variation of this pin, identical in design but with advertising for Certified Ice Cream, was also issued. This pin must have received very limited distribution, or been very expensive when issued, as very few are known to exist. The Cubs lost the World Series in 1929, and therefore this pin, which identifies the team as the "1929 Champions," was probably issued for only a very short period of time, after the pennant was clinched but before the World Series. The fact that the pin was manufactured by "Adcraft Mfg. Co., Chicago," a very small company (the credit appears on the underside of the curl) may also be related to its great rarity. The pin has a tiny pinpoint surface bump just below the "M" in "Champions" (of no consequence) as well as a few extremely light surface scratches (which are only visible when viewed at certain angles). Slight oxidation is evident on the reverse, as is common. It should be noted that all of the minor flaws are extremely unobtrusive and while the pin is technically in Excellent condition, its appearance is much closer to Near Mint. Outstanding high-grade example of this rare pin! Reserve $300. Estimate (open).
SOLD FOR $592.50