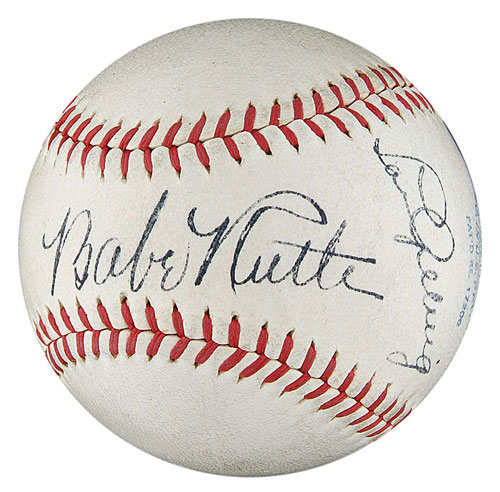 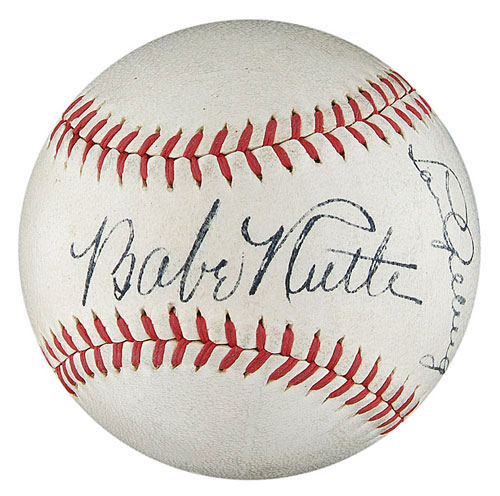 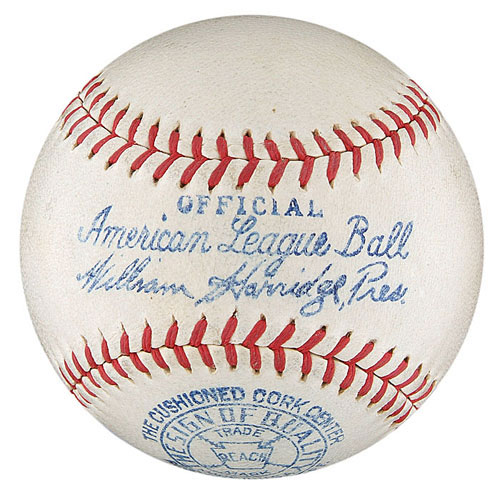 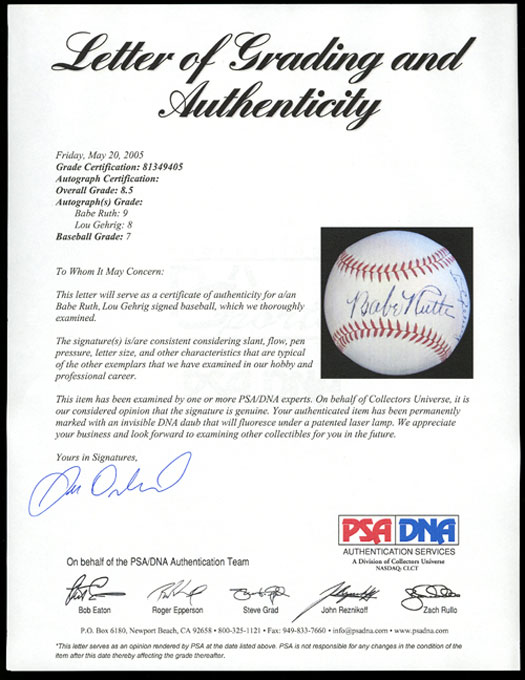 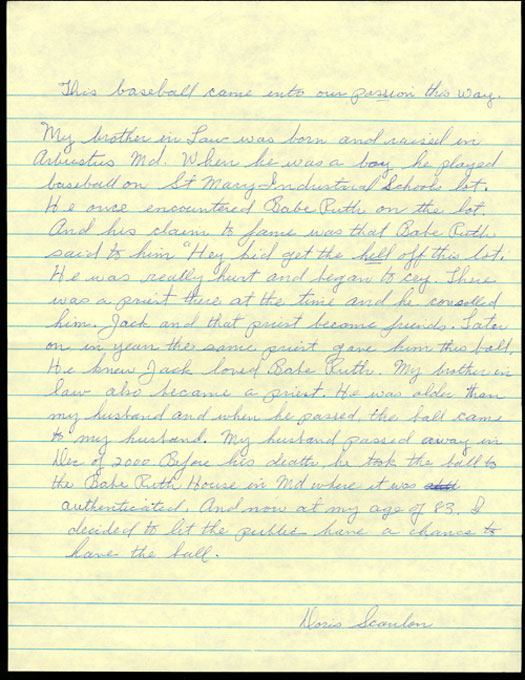 Offered is the finest Ruth/Gehrig signed ball we have ever seen. It is also the finest example that PSA has ever seen. The ball has been graded NM-MT+ 8.5 by PSA/DNA, distinguishing it as the highest-graded Ruth/Gehrig ball ever examined by the eminent grading and authentication firm. This is a Ruth/Gehrig ball bordering on perfection. This ball is also accompanied by a rare and extraordinary provenance: It originates directly from a priest at St. Mary's Industrial School for Boys in Maryland, the school attended by Babe Ruth during his youth, and with which Ruth maintained a close relationship his entire life. Collectors may remember this ball when it was initially offered at public auction by REA in May 2006. The ball appeared as Lot 6 in that sale and commanded a final sales price of $98,600, which is still the record price at auction for any Ruth/Gehrig signed ball. It has been consigned to this auction directly from the original purchaser.

At the time of its initial offering in 2006 we recounted how significant this ball was to the family that originally consigned it and how they treated it like the family jewels since the 1930s. It had literally been kept wrapped up in tissue with the remnants of its original box, protected from light and all elements, in a safe-deposit box for over fifty years. Because the ball had such monetary and sentimental significance to the family, and because (being a single item) it could not be split up among the children, they finally decided to sell it at auction. Robert Edward Auctions had the privilege of meeting with the entire clan at that time (they still reside in Baltimore) and gave them the news that this ball was far better than even they had hoped. The Near Mint condition of the Official American League (Harridge) ball, combined with the NM-MT black ink Gehrig signature on a side panel and the spectacular MT black ink Ruth signature on the sweet spot, make this very likely the finest single example of what is universally recognized as the most desirable dual-signed sphere in the hobby. It's pure technical grades aside, the ball merits additional accolades for the ideal placement of the signatures. The Gehrig signature adjacent to the sweet spot rests just 1/4-inch away from Ruth's, thus allowing for both signatures to be easily viewed at the same time. This is a most desirable quality for a dual-signed ball, one shared by very few Ruth/Gehrig balls. The young original recipient of the ball became a priest, and upon his death the ball was inherited by his brother. The complete history of the ball is duly noted in an accompanying letter provided by the widow of the priest's brother, the 83-year-old matriarch of the family. She writes in full:

This baseball came into our possession this way. My brother-in-law was born and raised in Arbustus Md. When he was a boy he played baseball on St. Mary Industrial School's lot. He once encountered Babe Ruth on the lot. And his claim to fame was that Babe Ruth said to him 'Hey kid get the hell off this lot.' He was really hurt and began to cry. There was a priest there at the time and consoled him. Jack and that priest became friends. Later on in years the same priest gave him this ball. He knew Jack loved Babe Ruth. My brother-in-law also became a priest. He was older than my husband and when he passed, the ball came to my husband. My husband passed away in Dec of 2000. Before his death, he took the ball to the Babe Ruth House in Md where it was authenticated. And now at my age of 83 I decided to let the public have a chance to have the ball.

This extraordinary Ruth-Gehrig signed ball, ideally preserved and delivered to the modern collecting world almost as if by a time machine (but more accurately by way of a time capsule), was a gift directly from Ruth's hands and directly from the grounds of St. Mary's. Included with the ball is the original box (torn and disassembled), which has been stored with the ball all these years. Rarely does an item of such significance survive in such a perfect state, let alone with such a desirable and impeccable provenance; and rarely does the opportunity present itself to acquire the very best example in the collecting world of any item of such magnitude, let alone a classic as universally recognized and revered as a Ruth/Gehrig signed ball. Full LOA from PSA/DNA and LOA from James Spence/JSA. Reserve $25,000. Estimate $50,000+. SOLD FOR $343,650.00