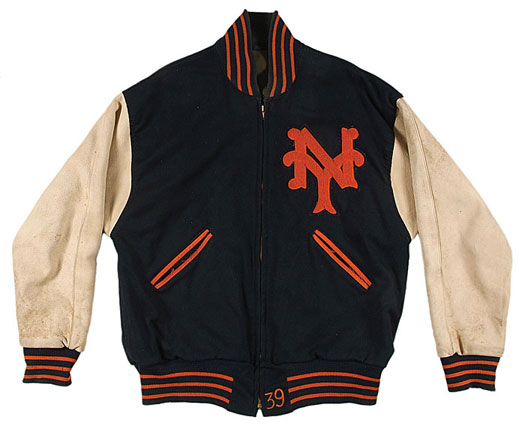 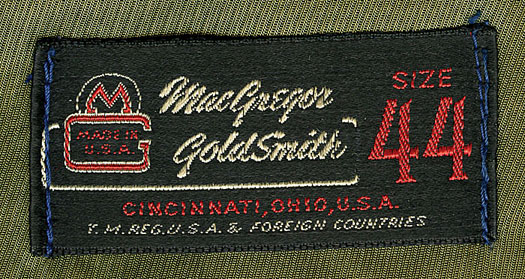 New York Giants "varsity style" jacket dating from the early 1950s. This jacket has a special provenance in that our consignor obtained it (along with another Giants team jacket and Mueller's 1955 Giants uniform, both of which are also featured in this auction) basically from Mueller himself. While attending a 1980s memorabilia show, our consignor witnessed Mueller enter the show with the three garments and sell them to a dealer friend of his (they were actually sitting together at his booth at the time). Immediately after Mueller left, our consignor indicated that he would love to have them all for his collection. Out of friendship, the dealer sold them to him for the same amount he had just paid Mueller. All of the garments have remained in our consignor's sole possession since that time. The black wool jacket, with white leather sleeves, features the Giants "NY" logo embroidered in orange on the left breast. Black-and-orange cloth trim adorns the collar, cuffs, and waist. The number "39" is embroidered in orange along the base of the left front zipper panel. A "MacGregor Goldsmith 44" label appears on the interior green lining. This was the one garment that Mueller had that was not worn by him (Mueller wore number "22" with the Giants). As our consignor recalls, Mueller told the dealer at the time that he "swiped" this one from one of his teammates, but he didn't remember who it belonged to. The reason for that is probably because the number "39" was worn by a number of players between the years 1947 and 1957: Sheldon Jones (1947), Pete Milne (1948), Bert Haas and Sal Yvars (1949), Roy Weatherly (1950), George Bamberger (1951), Roger Bowman (1953), Pete Burnside (1955), Jim Constable (1956), and Curt Barclay (1957). The jacket displays moderate-to-heavy wear, indicative of more than one season of use, including light stains on both of the leather sleeves. Major League team jackets, especially those dating from the 1950s, are scarce, and far rarer than most jerseys (in part, no doubt, because fewer were distributed). The offered example is the first New York Giants "varsity style" jacket we have ever offered and one that is all the more desirable due to its provenance. Reserve $200. Estimate $500+. SOLD FOR $2,370.00