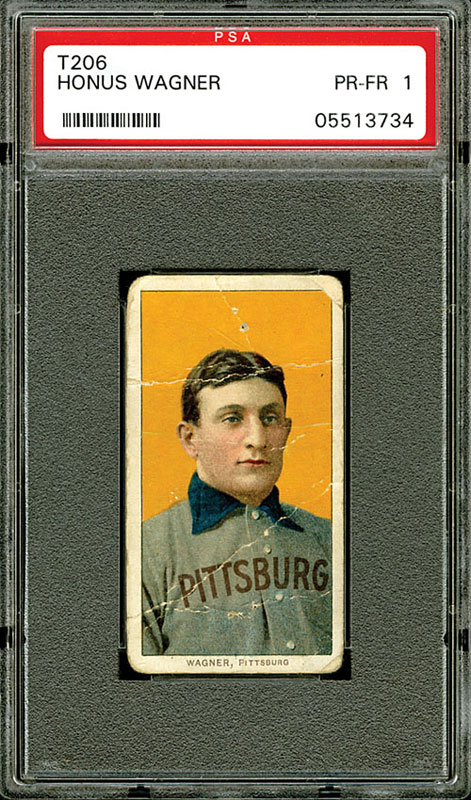 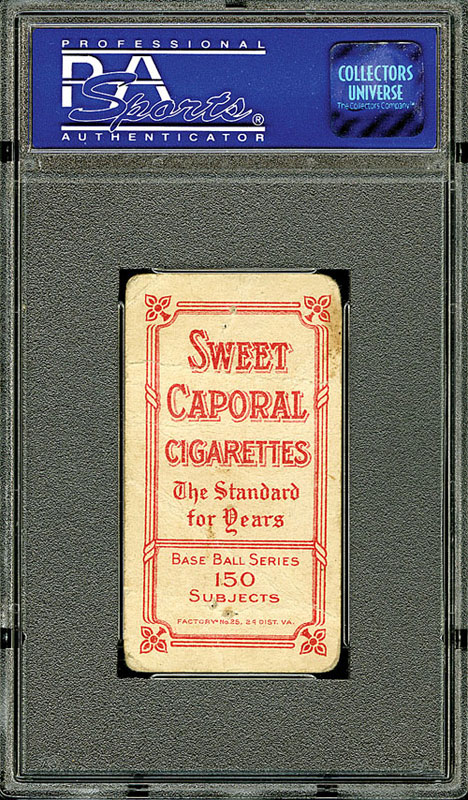 Every T206 Wagner naturally has a great story, sharing the Wagner legend that is now part of classic American folklore, but some examples have a richer history than others. Presented is an outstanding T206 Wagner, and one that has perhaps the most fascinating history of any T206 Wagner in the world with the exception of the Gretzky-McNall Wagner. This is the card that was stolen from the All Star CafÃ© in 1998, and eventually recovered by the FBI! This card originally appeared as Lot #2 in REA's 2009 auction and has been consigned directly by the buyer at that sale. We are extremely excited to be able to share this amazing card, and its rich history, with the hobby again!

In the 1990s, this T206 Wagner was proudly displayed at the All Star CafÃ© in Times Square in New York as part of the Charlie Sheen Collection, loaned by the actor for display at the flagship New York City location of the upscale sports-theme restaurant chain. The workers at the All Star CafÃ©, naturally, had access to the restaurant after hours. In 1998, two All Star CafÃ© chefs and one of the managers devised a plot to steal the Wagner. The plan was to remove the card from its display case, replace it with a color copy so that no one would notice, and then sell the original. The plan worked, at least for a while. A color copy viewed from afar in a display case can look very much like an original. The nephew of the executive chef was enlisted to sell the card for cash to famous New Jersey dealer Alan "Mr. Mint" Rosen, claiming the card had been saved and given to him by his grandfather. With this successful theft and sale under their belts, another crime of opportunity soon presented itself: A glass display case at the All Star CafÃ©, housing the finest example in the world of the 1934 Goudey high-number sheet with the rare #106 Lajoie card (which Charlie Sheen had purchased from Robert Edward Auctions year earlier) broke, reportedly by accident. The thieves stole the sheet and cut it up into individual cards so that the cards would not be recognized when sold (destroying the sheet in the process). However, this time they did not replace the original with a copy, so of course the theft was noticed. The police were called, the FBI became involved, and during the investigation it was soon discovered that the T206 Wagner was also stolen, replaced by a copy. The entire case was solved by the FBI, the thieves were arrested, and all of the stolen cards, including the T206 Wagner, were returned to Charlie Sheen. We remember this case well, not just from reading about it in the newspapers ( New York Times link: http://tinyurl.com/bppqd8r), but also because at the time REA was retained by the FBI to write the formal appraisal reports for use in the case regarding the authenticity and value of the items stolen, and REA president Robert Lifson was also hired to testify at the trial on behalf of the Department of Justice regarding card values, the auction process (which was relevant in determining value), and the authenticity of the stolen cards.

This card enjoyed a rich history in the hobby long before it gained notoriety as the only T206 Wagner to have been the target of a high-profile theft. This Wagner has been known since the earliest days of organized collecting and has an interesting provenance: this Wagner was actually owned by REA president Robert Lifson more than thirty years ago (it was worth about $4,000 at that time!) and by the legendary Barry Halper.

Over the years, the market trend is clear: The T206 Wagner card, even in the lowest grades, has always continued to climb in value. In fact, it may be more accurate to say that lower-grade Wagners have appreciated at a faster rate than higher-grade examples. There has always been an extremely strong demand for low-grade Wagners. Most Wagners in existence are in low grade, so the demand for low-grade Wagners is partly due to the simple fact that there are few higher-grade choices to consider. According to the PSA Population Report, for example, twenty of the thirty-three T206 Wagners ever evaluated by PSA are graded PSA 1 or PSA 2 (ten examples at each grade), with just eight examples graded higher (four Vg, one Vg-Ex, one Ex MC, one Ex, and the Gretzky-McNall PSA 8). Also, collectors are willing to be very flexible on the condition of a Wagner. Of course, the better the condition, the more valuable a Wagner will be to collectors who can afford it. A low-grade Wagner, however, is within reach of many more collectors and therefore has much greater liquidity, which is a very desirable quality for any commodity or store of value. The challenge, then, for most card collectors interested in a Wagner is not just to find a low-grade Wagner, which is hard enough, but to find an attractive low-grade Wagner.

The Card: This very attractive T206 Honus Wagner is particularly bright and clean, with flawlessly bold colors, perfect registration, a bright orange background, and a crisp, bold portrait. It is also perfectly centered. The advertisement for Sweet Caporal Cigarettes is boldly printed on the reverse. Graded PR-FR 1 by PSA, the card naturally has various condition flaws, including rounded corners, creases, and a few very tiny pinholes. Given that most T206 Wagners are in low-grade, the overall appearance of the card is of the greatest significance and cannot be communicated by just a numerical grade. Every card is different. No one is ever going to confuse this card with the famous Gretzky-McNall Wagner. But this card needs to make no apologies for its appearance. It has the most important characteristic that a T206 Wagner can possibly have: eye-appeal!

This tremendous low-grade example of the T206 Wagner compares very favorably with most other Wagner examples, and is a great-looking card that elicits a positive response from everyone who sees it. The colors are noticeably brighter, fresher, and bolder than most other T206 Wagners, including examples that are graded much higher. It has its condition problems, as do most other Wagners, but it also has a fascinating and unique history. While all T206 Wagners have a story, this particular Wagner has a more interesting story than just about any other baseball card in the world!

Whether this card will be valued by collectors at more or less than the $399,500 it realized at REA in 2009 (an all-time record for a Wagner graded PR 1) is completely unknown. Valuing Wagners is very subjective. That's for the bidders to decide. Whatever the auction result, it has been a great pleasure for us to properly document the history of this card, one of our very favorite T206 Wagner cards, and one of the most noteworthy examples of card collecting's greatest treasure. Reserve $100,000. Estimate $300,000+. SOLD FOR $402,900.00