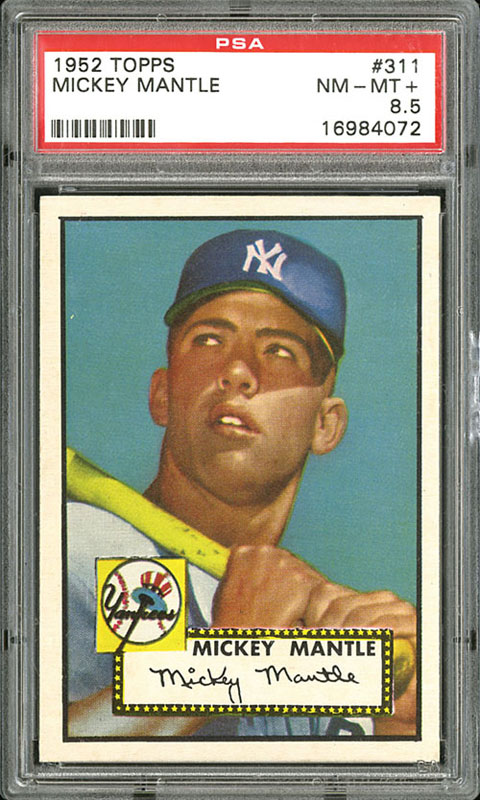 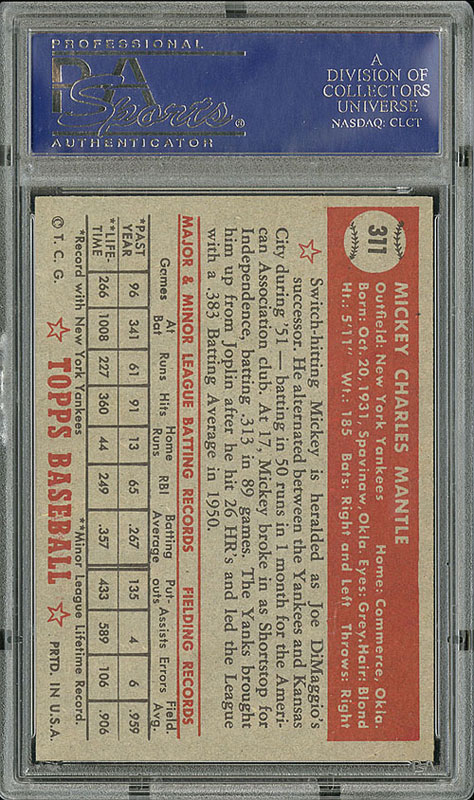 Graded NM-MT+ 8.5 by PSA. Presented is one of the finest examples in existence of one of card collecting's most important and famous classics: The 1952 Topps #311 Mickey Mantle. In fact, of the 1,112 examples graded by PSA to date, only three 1952 Mantles have ever been graded GEM MINT 10 and only seven have been graded MINT 9. All of these cards are entrenched in major collections and are simply not offered or available. The last PSA MINT 9 Mantle to be auctioned was the John Branca example, offered by Memory Lane Auctions in December 2006 and selling at that time for $282,587. In 2007, two PSA MINT 9 examples were sold in private transactions for $375,000 each. We are aware of no other publicly reported sales of MINT 9 (or GEM MINT 10) examples since. We believe that if a PSA GEM MINT 10 example were to come to auction today, it would sell for over a million dollars.

The offered card is one of only two #311 Mantles that have ever been graded NM-MT+ 8.5. The only other NM-MT+ 8.5 PSA example ever graded (a beautiful card but one which would universally be recognized as a lesser example than the offered card due to centering) was offered at auction in August 2010 (also by Memory Lane) selling for $154,700. In addition, while we fully recognize that there is subjectivity to grading, the offered NM-MT+ 8.5 Mantle might reasonably be considered superior in condition to several of the PSA MINT 9 examples due to centering. This NM-MT+ 8.5 example is virtually "dead centered" (which is almost unheard of for #311 Mantles), while many of the PSA MINT 9 examples actually have a pronounced natural image "tilt" and/or significant centering issues (pushing 60/40 L/R centering in some cases). Comparing this PSA NM-MT+ 8.5 card to images of PSA MINT 9 Mantles, we believe it would be impossible not to appreciate its superior centering and visual appeal.

This 1952 Topps #311 Mickey Mantle is absolutely stunning in all respects, approaching perfection. It has never before been offered at auction. By any measure, this is one of the finest ultra high-grade 1952 Topps #311 Mickey Mantle cards in existence. It is the finest example that REA has ever had the privilege of handling, and we believe it to be very conservatively graded. Extremely attractive, crisp, and perfectly clean. This card has brilliant colors and a flawless bold blue background with only a single very tiny white print spot visible near the left border. (We believe that this insignificant print spot is the sole reason the card was not graded MINT 9.) The corners are razor-sharp and the card, as noted, has outstanding centering. The reverse is flawlessly clean and beautifully centered just a hint towards the left. This is a simply outstanding 1952 Topps Mantle that even by the most rigorous standards borders on MINT.

The offering of this tremendously high-quality NM-MT+ example represents a very rare collecting opportunity. Collectors are often presented with the chance to purchase lower-grade examples, but a 1952 Topps Mantle remotely approaching this quality almost never comes to market. There is a reason for this: Few exist. One of card collecting's greatest classics, Mantle's Topps rookie card is the key to the 1952 Topps set, one of the most famous of all cards, and the single most popular and valuable postwar baseball card. This is a spectacularly bright, fresh, clean example of Mickey Mantle's most celebrated card, in a virtually unheard of and well-deserved ultra high grade. This is a "blue chip" card that has consistently appreciated in value over time in all grades. The SMR value for a PSA NM-MT+ 8.5 is $185,000. Reserve $50,000. Estimate $100,000+. SOLD FOR $272,550.00