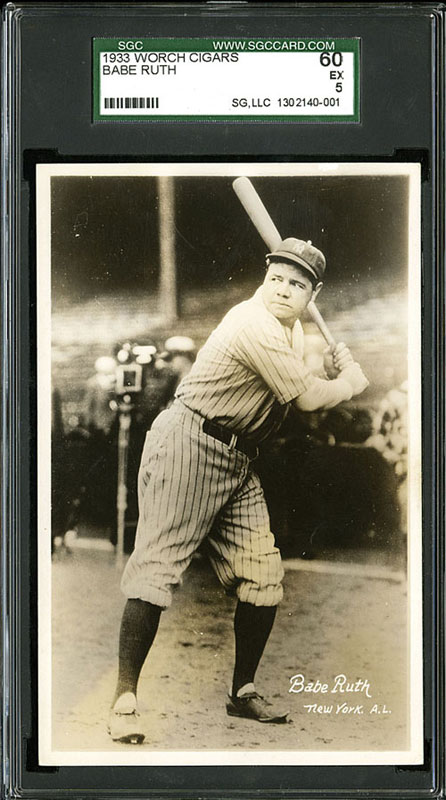 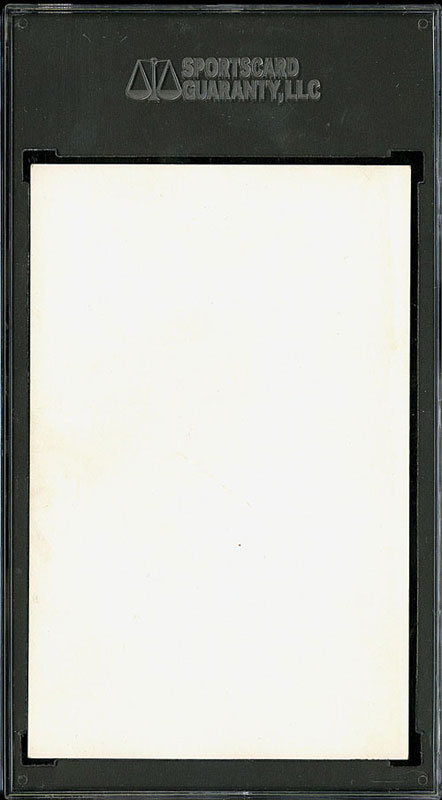 Graded EX 60 by SGC. One of three graded at this level with only a single example graded higher (SGC EX+ 70). Extremely rare high-quality postcard-sized premium card (3-3/8 x 5-3/8 inches) of Babe Ruth issued by the Worch Cigar Company of St. Paul, Minnesota. This card is a new discovery, recently found in Minnesota among family relics and consigned to this auction. Ruth, of course, is the key card from this very scarce premium tobacco set, which was made available only by mail. The real-photo sepia-toned image features the legendary â€œBambinoâ€ in his classic batting pose. This same pose was also used in R316. Ruth's name and team appear in the lower right corner (contrasting somewhat poorly because the printing is in white against a white background). This is an exceptional example: Bright, crisp, and clean. The card is perfectly centered with particularly strong corners displaying only light touches of wear, crease-free, and with a virtually flawless blank back. Only a slight indentation along the reverse right edge is responsible for this not grading Near Mint or higher. This is a very interesting set both because of the glossy real-photo high-quality of the issue, and the fact that it is the only American baseball-card tobacco issue of the era. By 1933, baseball-card issues by tobacco companies were the long-forgotten standard which had been replaced by cards issued with bubble gum and candy. Cards issued with tobacco were throwbacks to what was then "the old days," and apparently it was not a particularly successful promotion as it lasted only a single year. Baseball cards were not issued with tobacco in America again until the Red Man Chewing Tobacco sets of the early 1950s. This is a particularly rare, extremely attractive, and noteworthy Babe Ruth card, dating from his playing days with the New York Yankees. Reserve $1,000. Estimate $2,000+. SOLD FOR $3,555.00