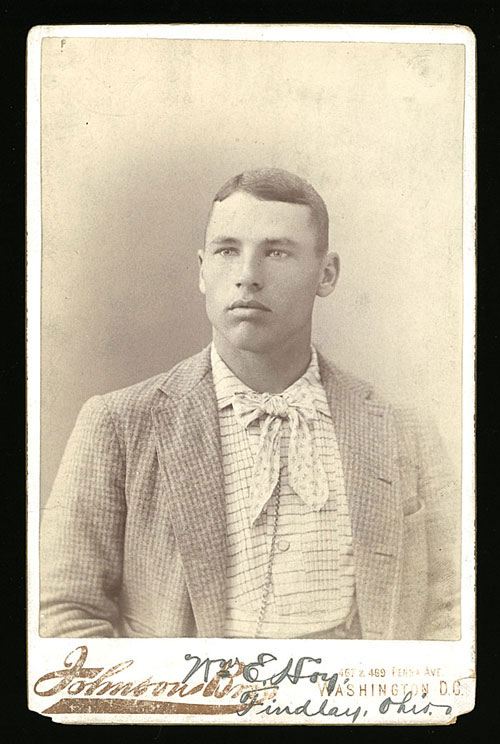 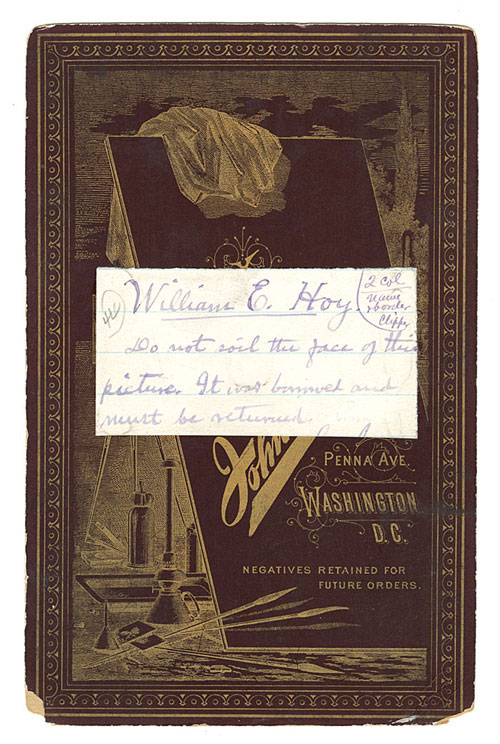 Cabinet photo of William "Dummy" Hoy, signed by Hoy in black fountain pen along the base. The studio photograph pictures Hoy in formal attire as he poses for the camera. Hoy has signed the mount "Wm E. Hoy," below which he has added the name of his hometown, "Findlay, Ohio." Both the signature and text grade "10." Produced by Johnson Bros. of Washington, D.C., as noted along the base of the mount and on the reverse. While we are aware of other cabinet photos of Dummy Hoy, this is only the second signed example we have ever seen. Despite the absence of a year, this photo was most likely dates to Hoy's tenure with the Washington Nationals of the National League. Hoy made his Major League debut with the Nationals in 1888 and played with the club in 1889 before jumping to the short-lived Players' League in 1890. With the demise of the Players' League after just one season Hoy then joined St. Louis of the American Association before returning to the Washington Nationals for two more seasons beginning in 1892. Hoy later played with Cincinnati, Louisville, and the Chicago White Stockings before retiring in 1902. While Hoy was a fine overall player, noted for his speed on the base paths and his outstanding abilities in center field, he is best known today for the fact that all of his achievements were accomplished with the handicap of being deaf. Legend even has it that the familiar ball and strike hand signals used by umpires today arose from the fact that Hoy could not hear their calls. Hoy finished his career with 2,044 hits and a .288 lifetime average, statistics that many of his supporters cite when they lobby for his induction into the Baseball Hall of Fame. Whether he eventually enters the hallowed halls of Cooperstown or not, Hoy's place in baseball history is already well founded given the obstacles he had to overcome to star for so many years at the game's highest level. This cabinet card appears to have been subsequently used for print, as evidenced by a slip of paper affixed to the reverse, which reads in part: "William E. Hoy/Do not soil the face of this/picture. It was borrowed and must be returned." Written in the upper right corner of the paper are editorial notes: "2 col/name + border/Clipper." The cabinet card (4.25 x 6.5 inches) displays a small chip in both the lower left and right corners, as well as a small horizontal crease along the left border (extending into the photo), and general border wear. In Very Good to Excellent condition. LOA from James Spence/JSA. Reserve $400. Estimate $800/$1,200. SOLD FOR $5,628.75