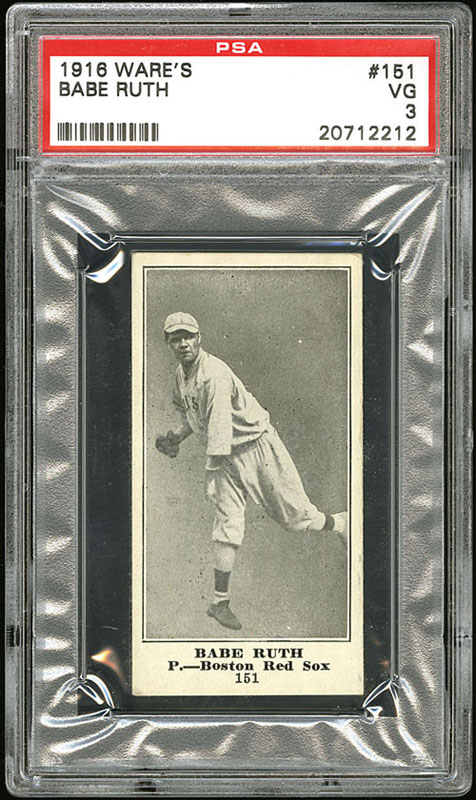 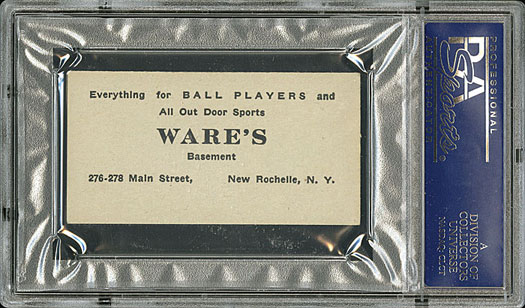 Graded VG 3 by PSA. Ware's Basement Sporting Goods is an exceedingly rare back for any M101-4, let alone for Babe Ruth's rookie card! This card is a "1 of 1" graded by PSA with no other examples with Ware's advertising on reverse graded at any level by PSA. It is the first and only example of this extremely rare M101-4 variety of #151 Babe Ruth that we have ever seen. This card (and set) is usually referred to as issued by The Sporting News , but the M101-4 set was actually issued with a variety of advertising backs as well as with blank backs. This particular example is an extremely rare M101-4 variety of Babe Ruth's rookie card, featuring advertising for Ware's Basement Sporting Goods store on the reverse. Ware's are very similar to M101-4 and M101-5 Sporting News . The M101-4/5 sets were also issued as promotional vehicles for a number of regional businesses, among them Ware's Basement Sporting Goods of New Rochelle, New York (as well as Globe Clothiers of St. Louis, which is also catalogued H801-9). While all of the M101-4 related issues have the same fronts, a variety of different regional advertisers can be found on their reverses (Globe, Gimbels, Weil Baking, etc.) in addition to the more common The Sporting News and blank-backed cards. Exactly how this set was issued by Wareâ€™s is unknown, but it is likely that the cards were distributed from a single retail location (276-278 Main Street in New Rochelle), thus accounting for their great rarity today. Like most of the regionally issued M101-4/5 sets, we have never seen or heard of a complete set of Ware's. This is a very distinctive example of Babe Ruth's rookie card, universally regarded as one of the most significant cards in all of card collecting. It would be hard for a piece of cardboard to better symbolize the history, the essence of American sport, than this 1916 rookie card of Babe Ruth. Ruth had only pitched in four games with Boston in 1915 but fortunately impressed the card manufacturer enough to warrant inclusion in this major issue. This is an outstanding and extremely attractive example in all respects. Ware's cards (like all M101-4/5 related sets) have a glossy coated surface which is very susceptible to creasing. This card has no creases. The front is bright and clean. The image is bold and crisp. The corners are square with very light even wear. The card has an Excellent appearance but has been downgraded to VG 3 by PSA due to a factory roller mark across the top portion of the card. This is as made, but PSA has downgraded the card two full grades because of it. Otherwise this card would certainly be an EX 5. The printed advertisement for Ware's Basement Sporting Goods on the reverse is bold and crisp. This is an extremely attractive example of one of the most significant and highly prized of all baseball cards. Consigned directly from the family of legendary collector Paul Pollard. Reserve $10,000. Estimate $20,000+. SOLD FOR $130,350.00