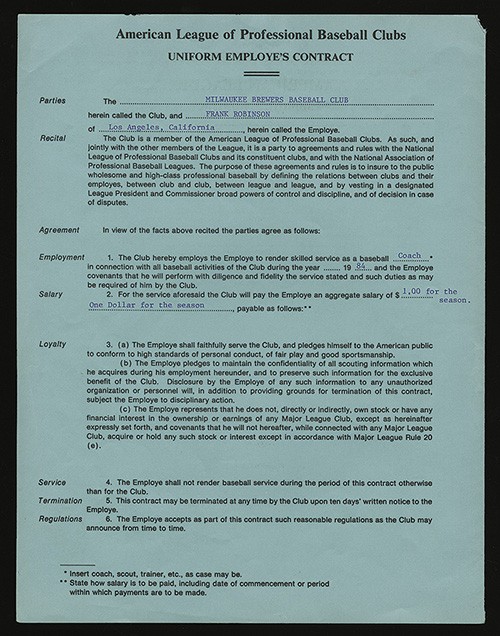 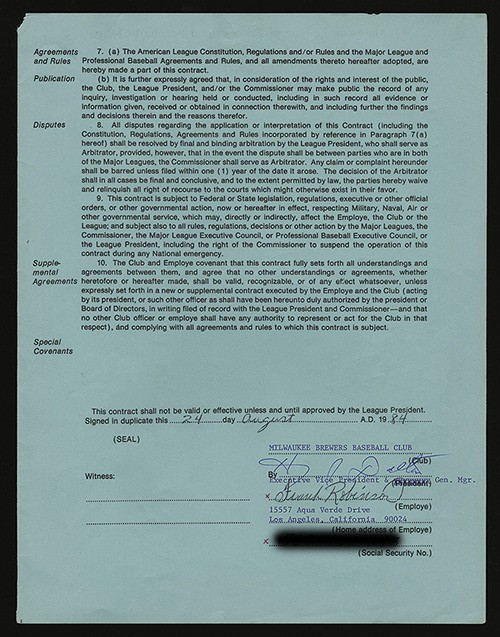 Four-page fold-over contract, dated August 12, 1984, between Frank Robinson and the Milwaukee Brewers Baseball Club, signed in black ink by "Frank Robinson" (grading "10") and in blue ink by Harry Dalton ("10"), as general manager. The contract, which is signed by Robinson and Dalton but not signed by a witness or the league president, calls for Robinson to receive just "One Dollar for the season" as a coach with the club. The nominal salary most likely is related to the terms of his previous managerial contract with the San Francisco Giants. Robinson managed the Giants for three and one-half seasons before being released by the club on August 4th. It is likely that had the Brewers paid him anything more, the Giants would not have had to pay him the remainder of his salary for the 1984 season. Robinson was hired as a hitting coach for the Brewers, but he only stayed with the club through the end of the season before accepting a coaching position with the Baltimore Orioles in 1985. Robinson, of course, broke one of baseball's long-standing color barriers when he became the first African-American manager in major league history in 1975 with the Cleveland Indians. Robinson retired as a player in 1976 with 528 home runs, 1,812 RBI, and a .294 average. He is also the only player to win the MVP Award in both leagues. He was elected to the Hall of Fame in 1982, his first year of eligibility. Baseball contracts of Hall of Fame players are rare and the offered example is no exception. This is only the third Frank Robinson contract of any kind we have ever seen and just the second major league example (the other two, both offered by REA in our April 2014 auction, were a 1964 Reds contract and a 1974-1975 Puerto Rican League contract). The contract (8.5 x 11 inches) displays a small tear in the upper left corner (affecting all four pages) and a pin hole on the back page; otherwise in Excellent to Mint condition. LOA from James Spence/JSA. SOLD FOR $540